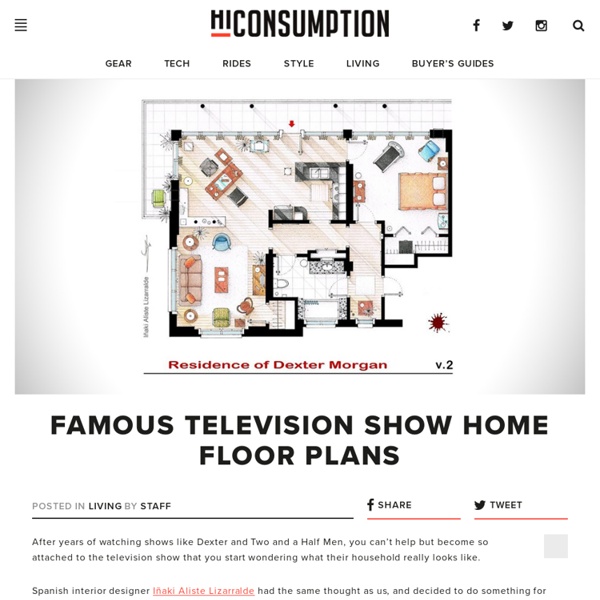 After years of watching shows like Dexter and Two and a Half Men, you can’t help but become so attached to the television show that you start wondering what their household really looks like. Spanish interior designer Iñaki Aliste Lizarralde had the same thought as us, and decided to do something for himself creating this incredible series of highly detailed floor plans from some of our favorite television shows. The collection includes the likes of The Simpson, Dexter, Friends, Seinfeld, Two and a Half Men, The Big Bang Theory, How I Met Your Mother, and a handful others. Each of the floor plans is highly detailed, and not only includes the architectural side of things, but also goes into immense furnishing details really bringing these television shows to life. As a huge fan of a lot of these shows, this was definitely a project we could appreciate the amount of time and effort that was put in. Check out the floor plans below. The Big Bang Theory The Simpsons Sex and the City Friends Up

Dear Pixar: Leave 'Toy Story' alone Because there is perhaps no longer any such thing as an untouchable or sacred property in Hollywood, not that there were many in the first place, Toy Story 4 is happening. It’s not surprising, what with 2010’s Toy Story 3 opening to near universal acclaim en route to crossing the billion-dollar mark worldwide. But for some viewers, it’s depressing all the same; for a franchise that started as a means of putting Pixar Studios on the map in 1995, heralding Disney’s new renaissance, audiences have come to feel an intimate connection with a film about friendship and sentient toys that also just happened to launch its own massive toy craze. This is ironic given the first film’s message about the importance of remaining loyal to one’s simple childhood diversions, even as toys were getting flashier and more elaborate with every passing year of the ‘90s.

Is Pixar's Run of Greatness Over? I’ve written before (more than once, I’m afraid) about the dispiriting decline of Pixar over the past few years. After a run of success over its first 11 films unparalleled by anything else in contemporary cinema—a run that culminated with the astonishing trifecta of WALL-E, Up, and Toy Story 3—the studio seems largely to have lost its way. It began with 2011’s Cars 2, the leading contender for the worst Pixar film to date. Things improved with Brave the following year, and then regressed again in 2013 with Monsters University. This summer proved to be the first since 2005 in which Pixar did not release a feature at all: The Good Dinosaur, which was slated for release in May—having already been relocated from a 2013 date—was pushed back yet again, until late next year.

What Google’s New Study Tells Us About Why People Go to the Movies Nobody likes feeling irrelevant, and when steering people towards good movies and away from bad ones is part of how you make a living, it’s more than a little dispiriting when it seems no one’s listening. But if the grosses for Trans4mers and The Amazing Spider-Man 2 weren’t enough, now here’s this: Google conducted a study, analyzing nearly two years of search data, to determine what makes frequent moviegoers choose which movies they’ll see. As you may have guessed, the carefully composed missives of yours truly (and my critical brethren) don’t really figure into the equation.

What ‘Mockingjay–Part 1′ Misses by Glossing Over Katniss’ Trauma Throughout much of Mockingjay, the third novel in the Hunger Games series, the unraveling of Katniss Everdeen’s mind takes over the page. Even from the beginning, she strokes a pearl that Peeta found in the arena in Catching Fire and often repeats variations of her mantra: “My name is Katniss Everdeen. I am seventeen years old. My home is District 12.

A Treasury of Dumb Quotes About Whitewashed Casting From the People Responsible for ‘Exodus: Gods and Kings’ Let’s get this out of the way: I have not yet seen Exodus: Gods and Kings, Ridley Scott’s big-budget retelling of the Moses story, and God willing, I won’t have to. For starters, it looks like a yet another dirge-like epic on the order of his earlier Kingdom of Heaven, Robin Hood, and (yes, I’ll say it) Gladiator, a dull slog through the past from a director who works best in the present and the future. But the setting and story aren’t the only elements of Exodus that are tied firmly to the past, as considerable controversy has brewed around Scott’s old-Hollywood decision to cast this story of Egyptian pharaohs and prophets with a cast roughly as diverse as the industry seats at an Eagles concert. And now, facing a backlash from commentators and social media, the people responsible for the movie are in spin mode, prompting a spectacle surely more entertaining than anything Sir Ridley put on screen. It started, of course, as a meme.

Guardians Of The Galaxy's Most Awesome Quotes Ever Do you know one sure sign that James Gunn has created a timeless classic with Guardians of the Galaxy? Fans are already quoting their favorite lines from the movie. Just like Star Wars, Napoleon Dynamite, The Big Lebowski, Anchorman, and Monty Python & The Holy Grail, fans are going to be quoting Guardians of the Galaxy for a very long time. Here are ten of our favorite lines from the film. After Gamora complains about Peter Quill’s ship The Milano being filthy, Quill makes an interesting comparison to the work of an abstract expressionist painter, who was known for his unique style of drip painting. 10.

Why Isn't Fiona From 'Shameless' Treated Like the 'Difficult Men' of TV? Sunday night on Shameless, while most of America was watching the Super Bowl, William H. Macy's Frank Gallagher went on a Dude, Where's My Disability Check tour of Chicago's South Side, trying to piece together the details of a blacked-out night where he apparently blew $121,000 on drugs. It was a typical move for a series that often puts its best characters in the back seat in order to focus on Frank's more outrageous antics. In particular, this tendency shortchanges Emmy Rossum's Fiona, Frank's daughter, and the series' best and most complicated character. A diner waitress who spent half the previous season in jail (she endangered the welfare of her toddler brother when he got into the bag of cocaine she left out on the kitchen table), Fiona fits perfectly into one of the dominant television traditions of the past ten years: the morally/ethically ambiguous protagonists who are in many ways their own worst enemy.

A Diverse, Gender-Swapped LOTR Recast - Book Riot This past weekend, my roommate and I were on a mission to rewatch the extended versions of The Lord of The Rings. (Let’s not talk about the three-part Hobbit right now, though, ok? I am still reeling.) As we watched, I remembered exactly how white and dudely LOTR is. It’s still one of my favorite book series and I’ve always thought the movies did justice to the books, but that doesn’t mean the cast couldn’t use a refresh. Big-Screen 'Wicked' Adaptation Eyeing 2016 Release No one mourns the wicked, unless “Wicked” doesn’t arrive in theaters soon. It looks like worries may be assuaged, though, as producer Marc Platt has said the big-screen adaptation of the Broadway hit is eyeing a 2016 release. Platt, who brought “Into the Woods” to theaters and produced “Wicked” on Broadway, told Film Divider that nothing is “set in stone,” but Winnie Holzman, who wrote the “Wicked” libretto and created ABC’s “My So-Called Life,” is chiseling away at the script. “2016 is the goal, but I don’t know whether we’ll make that goal or not,” Platt said. “We will make the movie, but like I said, the bar is really high. We’re going to scrutinize our work on the screenplay and our prep on the movie, and when we feel like it’s ready, okay.

12 Eye-Opening Facts About 'Peaky Blinders' Peaky Blinders is a series based on the eponymous gang that may or may not have terrorized Birmingham, England after World War I. Cillian Murphy stars as Tommy Shelby, the leader of the Peaky Blinders, and the series was created by Steven Knight, who co-created Who Wants to be a Millionaire? almost two decades ago. From 'X-Men: Apocalypse' to 'Batman v Superman,' Sequels Aren't Making What Hollywood Needs Them To Up until recently, the most common descriptor attached to Hollywood sequels was “critic-proof”—a backhanded compliment that describes how films cash out on fan interest and appeal to the lowest common denominator. Even the most generic action movies have spawned improbably prompt follow-ups, from Teenage Mutant Ninja Turtles to Olympus Has Fallen. In an age of superhero franchises, studios have doubled down on sequels, considering them the safest possible bets as the average budget of blockbusters swells close to $200 million. But looking at 2016’s box-office results, it’s possible 2016 may be the year the bubble bursts.