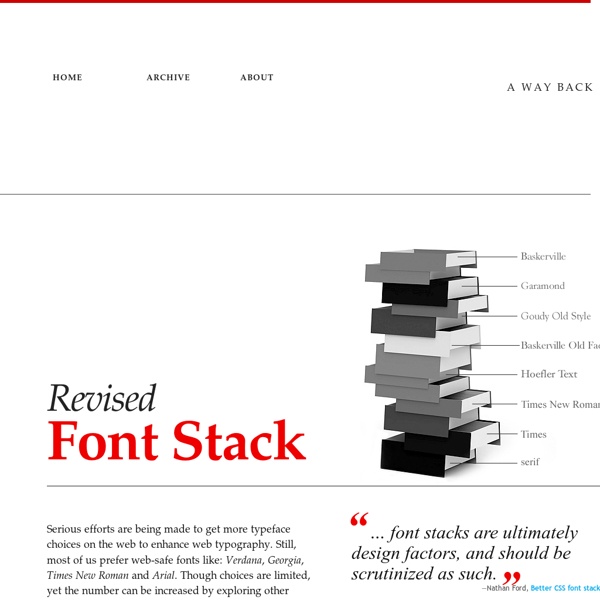 Serious efforts are being made to get more typeface choices on the web to enhance web typography. Still, most of us prefer web-safe fonts like: Verdana, Georgia, Times New Roman and Arial. Though choices are limited, yet the number can be increased by exploring other pre-installed fonts. “… font stacks are ultimately design factors, and should be scrutinized as such.”—Nathan Ford, Better CSS font stacks Baskerville, Garamond and Palatino have already been used a few times to create font-stacks that inspire. I’ve selected 10 popular typefaces, serif and sans-serif, each from the survey. MicrosoftTahoma, Verdana, Segoe, sans-serif;Microsoft.com will be (in most cases) rendered in Verdana on Mac, and in Tahoma on Windows. Times New RomanIf we look at the above snapshots taken from Sushi & Robots’ about page, we will find that Palatino and Georgia have different x-height (and weight) than Baskerville and Garamond.

Millennials Are More Racist Than They Think - Sean McElwee - POLITICO Magazine News about race in America these days is almost universally negative. Longstanding wealth, income and employment gaps between whites and people of color are increasing, and tensions between police and minority communities around the country are on the rise. But many claim there’s a glimmer of hope: The next generation of Americans, they say, is “post-racial”—more tolerant, and therefore more capable of easing these race-based inequities. Unfortunately, closer examination of the data suggests that millennials aren’t racially tolerant, they’re racially apathetic: They simply ignore structural racism rather than try to fix it.

10 Great Tips For Improving Your Web Typography From the invention of the printing press in the 15th Century, to the creation and development of the Internet into the 21st, typography has evolved to reflect technological advancement to become both a science and an art form. Once a specialist occupation, the digital age has opened typography to computer users and web designers. When creating pages and laying out text with other content there are several guiding principles that designers should bear in mind. Typography is a huge field of study, but this post brings together a handful of hints to help web designers improve their pages. 1.

The Typography of Sanborn New York City Maps NEW YORK Staten Island. Atlas 159, 1885 BROOKLYN New York. Increasing the Clickable Area of Inline Links Demo It has been best prac­tice for some time now to ensure that nav­ig­a­tion links have appro­pri­ate pad­ding. This makes click­ing these links much easier, espe­cially if you are on a mobile device. Here is an art­icle, writ­ten four years ago, dis­cuss­ing this very idea. Le sélecteur de couleur nColor What is it? The nColor color picker allows to select and compare colors in various simulations of color-blind vision. This is a simple HTML page with a JavaScript script and style properties. 59 Free Twitter Tools and Apps That Do Pretty Much Everything Twitter is a fascinating adventure of relationships, entertainment, education, and fun. Now imagine layering on a few dozen power-ups. That’s how it feels sometimes when you find just the right Twitter tool. And there’s a tool for practically every desire or whim. Tools for productivity, for efficiency, for research, and so much more. With such a generous API, Twitter tools have become legion—and we social sharers are better off for it.

Typography for Headlines Design Showcase They say that content is king. However, how you present it is pretty important too — no more so than when it's the main heading on your page. This collection of headline typography should provide some ideas for a more creative approach to designing this most important of page elements. Kick-Start Your Project: A Collection of Handy CSS Snippets Don't start your project with an empty style sheet: there are many great snippets that can make your life easier and speed up web development. We are going to show you some handy snippets that you might find useful for kick-starting your next project. In one of the previous articles “Basic Ready-to-Use CSS Styles”, we saw how we could create a suite of classes to help the design process while making a website. I hope you made your own set of patterns! Today we are going to see how we can continue this exercise with some things a little bit more technical. I’ll show you a bunch of CSS snippets you may or may not know, which can dramatically increase your CSS development speed.

Janelle Monae Building A Music Empire Janelle Monáe wants the world to know that Wondaland Records, the singer-songwriter-producer's new venture with Sony Music Entertainment's Epic Records, is not merely a record label—it's a movement. Wondaland is "a joint dream in which a group of artists set out to swim towards a boat all together—and in some ways, I'm a lifeguard," says Monáe, 29, the Kansas City native who grabbed our attention in 2010 with her critically hailed debut, The ArchAndroid, and who would go on to become a face of Procter & Gamble's CoverGirl, alongside Katy Perry and Pink. She is also a juror for this year's Clio Music Awards. Atlanta-based Wondaland reps an utterly cool lineup of acts, including Jidenna, whose debut single "Classic Man" dropped last month.

30 of the Best Web Typography Resources Online It seems there are two camps among web designers: those who embrace web typography, experiment with it, and try new things in virtually all of their designs; and those who avoid it like the plague, opting to use standard, web-safe font stacks with little variation. It also seems like a lot of the designers who fall into the second group wish they were more like the first. The resources below can help you improve your web typography, regardless of which camp you fall into. There are tools for creating unique typography, references and articles that can teach you typographic principles, and plenty of inspiration and news to keep you updated on the state of web typography. Typography Tools

Basic Ready-to-Use CSS Styles This is a collection of some basic styles that can come in handy when creating your own style definitions. Learn how to make some useful classes for simple styles and how to apply them to a variety of elements. View demo Download source