22 Rules of Story Telling every Teacher should Know about 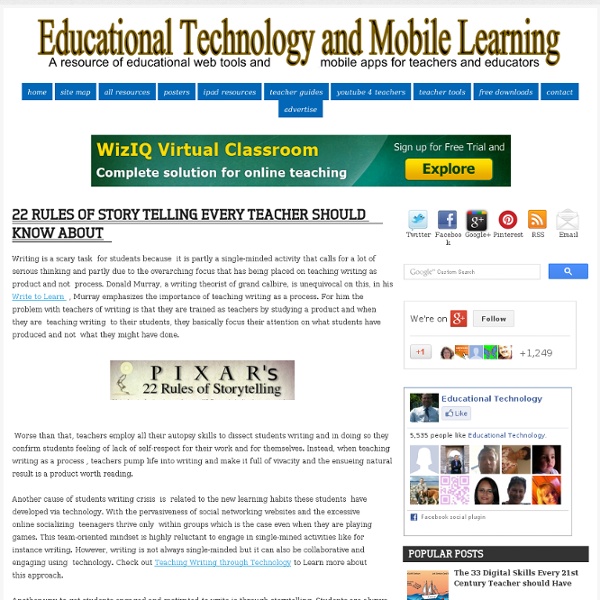 Writing is a scary task for students because it is partly a single-minded activity that calls for a lot of serious thinking and partly due to the overarching focus that has being placed on teaching writing as product and not process. Donald Murray, a writing theorist of grand calbire, is unequivocal on this, in his Write to Learn , Murray emphasizes the importance of teaching writing as a process. For him the problem with teachers of writing is that they are trained as teachers by studying a product and when they are teaching writing to their students, they basically focus their attention on what students have produced and not what they might have done. Worse than that, teachers employ all their autopsy skills to dissect students writing and in doing so they confirm students feeling of lack of self-respect for their work and for themselves. Another cause of students writing crisis is related to the new learning habits these students have developed via technology. Related:  Storytelling, Performance, Oracy

Phonic crap hit fan By Hannah RichardsonBBC News education reporter Boys did worse than girls in the phonics test Fewer than six out of 10 pupils, 58%, passed the controversial new national phonics reading test in England, official statistics show. The test checks six-year-olds' ability to read aloud a mixture of 40 real and made-up words, sounding them out using the phonics system. Ministers said the check had identified pupils who needed further help in learning to read. But teaching unions say it risks doing long-term damage to children's reading. This is because it tests children's ability to decode words using a single method, phonics, rather than their ability to read itself. 'Waste of money' Some teachers have said bright pupils who use different methods of reading are trying to read the made-up words as real ones and being marked down for it. The official results show some 62% of girls passed the test compared with 54% of boys. Continue reading the main story Phonics check 'Nonsense' 'Three Rs'

Lesson 5 – The Boy Who Became a Bear | Discovering Our Story An Iroquois Story A long time ago in a village far to the east there lived a little boy. One time his parents died making him an orphan. No one would take care of this poor boy. He would wander from home to home begging for food and shelter. The people said his uncle should take care of him so they sent him far away to his uncle’s village. If the boy moved too slowly or did something wrong the uncle would beat him with a stick. The boy wondered why his uncle treated him so badly, but no matter how hard he thought he could not imagine why his uncle was so mean to him. One day the boy decided he did not want to live with his uncle anymore. So the boy went into the woods and followed the trails until they ended. The animals had been watching the boy and one day they gathered around him. The animals were shocked. The bears said the boy eats the same food as us. The bears took very good care of the boy. One day he was digging roots with the bear people and he looked at his hands. 1. 2. 3. 4.

10+ Tips and Resources for Inspiring Learners to Write “The pages are still blank, but there is a miraculous feeling of the words being there, written in invisible ink and clamoring to become visible.” ~Vladimir Nabakov Our language learners have powerful stories to share, but they need their teachers to help them get these stories out in English. Teach Them Free Writing Many times our students do not get the chance to write without having to edit themselves and worry about grammar. Get Them Writing Regularly Every day my students knew the drill. Change the Environment On sunny days, my students and I would go outside and find a nice place around the school campus to take 10 minutes to write. Stimulate with Music In these classes I often allowed my students to get out their mp3 players and listen to music. Create a Scene Make a paper cut-out of a body and tape it to the floor (or create the body outline with masking tape). Use Word Clouds Marisa Constantinides created a great word cloud with images. How do you motivate your students to write?

365 days in my shoes Day 68 Main course SPaG and dessert is Pie!!! The icing and cherry on the cake! Grammar through Talk for Writing with Pie Corbett supported by Julia Strong and Nick Batty Interactive grammar games and the use of focused teaching two deepen children’s understanding and interest in how words and sentences work. The day began with an exercise on grammar. Delegates were invited to ‘take the grammar test’ to find out whether they had heard of key grammatical terms our children could be faced with in SPaG as well as knowing how to use them. These words included :- Noun, pronoun, adjective, determiner, conjunction, verb, adverb, preposition, connectives, sentence, clause, phrase, imperative, present tense, pasta tense, singular, plural, suffix, prefix, paragraph. Straightforward? And then….. Subordinate clause, possessive pronoun, adverbial, relative clause, modal verb, relative pronoun, active voice, passive voice, subject, object, cohesion, ambiguity, fronted adverbial, subjunctive. Have fun! Like this:

More English Fairy Tales/The Hedley Kow - Wikisource, the free online library THERE was once an old woman, who earned a poor living by going errands and such like, for the farmers' wives round about the village where she lived. It wasn't much she earned by it; but with a plate of meat at one house, and a cup of tea at another, she made shift to get on somehow, and always looked as cheerful as if she hadn't a want in the world. Well, one summer evening as she was trotting away homewards she came upon a big black pot lying at the side of the road. "Now that" said she, stopping to look at it, "would be just the very thing for me if I had anything to put into it! "Maybe it'll have a hole in it," she said thoughtfully:— "Ay, that'll be how they've left it lying, hinny. "Mercy me!" For a while she could do nothing but walk round and round her treasure, admiring the yellow gold and wondering at her good luck, and saying to herself about every two minutes, "Well, I do be feeling rich and grand!" "Eh my!" The old woman stared after it, till it was fairly out of sight.

A Beautiful Beginning: 10+ Tips & Resources for Creating a Safe Classroom Environment “Treat people as if they were what they ought to be and you help them to become what they are capable of being.” Goethe For many of us, the first day of our new classes is right around the corner. For many students starting classes is frightening. Tips for Creating a Safe Environment I hope the following tips and resources will help you in creating a safe environment for your learners. Tip: Let Them Know You Believe in Them All students should feel they can succeed in your classroom and that you aren’t holding their past against them. Greet them at the door with a smile, handshake or hi-five! Tip: Surround Them with Motivation When our students walk in the classroom, they should feel inspired to learn. Post motivational posters around the classroom.Write a quote on the board each day they walk in the room. Tip: Establish the Ground Rules for Respect Tip: Build Relationships Students need to feel like they can approach you with problems, questions, and ideas. Have them interview you!

5 Ways to Use Technology for Family Storytelling — LitWorld Technology has dramatically changed the way we communicate, create and collaborate with each other. It makes our world more connected and amplifies individual stories. And yet keeping up with the latest apps and gadgets and learning how to use them can feel intimidating and overwhelming. One of the things we love the most about technology and the digital age is that it encourages us all to be curious, forever learners. Embracing technology and experimenting with new devices and platforms in your home makes you and your child co-learners. 1. Learning how to tell a story through a photo, and how to see the story within a photo is an important part of literacy. 2. At LitWorld we are constantly thinking about our mission statement and core values. A great app that we've found for this type of activity is CloudArt. 3. The internet gives us the extraordinary opportunity to learn from people around the world and to benefit from their experiences, creations, and wonderings. 4. 5.

Tips to Inspire Writing “I write to give myself strength. I write to be the characters that I am not. I write to explore all the things I’m afraid of. ” – Joss Whedon Writing is personal. Tips Google has various tools, apps, and features to improve our students’ writing. Bookmarks Click any of the boxes to visit the resource! Inspiring Writing, by shellyterrell Enjoyed these resources?