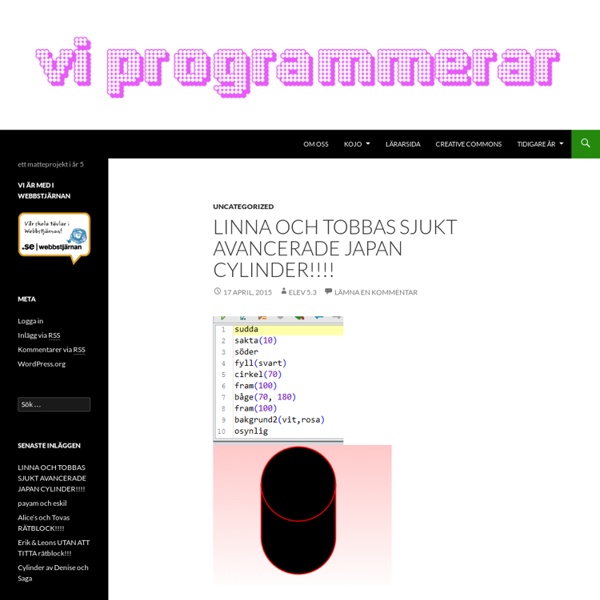 Kojo Home Kojo is an open source App that runs on Linux, Windows, and Mac. It is a Learning Environment – with many different features that enable play, exploration, discovery, creation, and learning in the areas of: Computer Programming and Computational thinking. Math and Science. Inductive, Deductive, Systematic, and Analytical thinking. Chip for Raspberry Pi by Soldering Sunday Chip and his friends, The Pixel Pals, live on Planet M and they are makers. Through their adventures, they learn about different materials and technologies, solve problems, and explore new ideas. 184 very special people helped bring Chip for Arduino to life through Kickstarter and now Chip is here to start a new adventure on the Raspberry PI - and he needs your help. Many electronic kits do not offer anything more than a battery and a LED.

Teaching Kids to Code Every era demands--and rewards--different skills. In different times and different places, we have taught our children to grow vegetables, build a house, forge a sword or blow a delicate glass, bake bread, create a soufflé, write a story or shoot hoops. Now we are teaching them to code. We are teaching them to code, however, not so much as an end in itself but because our world has morphed: so many of the things we once did with elements such as fire and iron, or tools such as pencil and paper, are now wrought in code. We are teaching coding to help our kids craft their future. In this collection we share many different perspectives on coding, from a university professor's vantage point (MIT's Mitch Resnick describes why learning to code is like learning to learn) to an entrepreneur's reflections from his cross-country roadtrip to bring coding--and his stuffed dog--to classrooms across the U.S.

Bee-Bot Floor Robot – Teaching Basic Programming A friend gave me a Bee-Bot floor robot on “permanent loan.” She wanted me to figure out some good ways to teach the basics of programming as well as some algebra. I was happy to take on the challenge. What is the bee-bot? I handed the bee-bot to the kids with the prompt, “What do you think?” When they asked about it, I answered: “Figure it out.” This Computer Language Is Feeding Hacker Values into Young Minds Last year, I went to Nigeria with Mark Zuckerberg. One of the first stops on the trip was a program that taught kids how to code. When Zuckerberg entered the room, many of the young students had a hard time pulling themselves away from their projects, even to gawk at one of the world’s richest men. Facebook’s founder instead came to them. “What are you making?” he’d ask.

Code Monster from Crunchzilla <h2>Code Monster gets kids excited about programming. It is a combination of a game and tutorial where kids experiment with learning to code. <p> Code Monster use Javascript. Paul Ford: What is Code? A computer is a clock with benefits. They all work the same, doing second-grade math, one step at a time: Tick, take a number and put it in box one. Tick, take another number, put it in box two. Tick, operate (an operation might be addition or subtraction) on those two numbers and put the resulting number in box one. Tick, check if the result is zero, and if it is, go to some other box and follow a new set of instructions. You, using a pen and paper, can do anything a computer can; you just can’t do those things billions of times per second.

Education reform for computer science With schools more eager to welcome coding in the classroom, some advocates now push to make it a public-education priority. In her 2014 book Connected Code: Why Children Need to Learn Programming, Yasmin Kafai, Ed.D. ’93, of the University of Pennsylvania, urges schools add on to the traditional “3 Rs” of reading, writing, and arithmetic: the aRts and pRogramming. That the public perceives computers as both essential, and essentially opaque, is a form of illiteracy. Jane Margolis, Ed.D. ’90, senior researcher at UCLA’s Graduate School of Education and Information Studies, argues that this “learned helplessness” has larger implications for equality. Margolis’s book Stuck in the Shallow End continues to be one of the few lengthy examinations of how an early section of the pipeline—public K-12 education—creates racial disparities in the field of computer science. Despite the free programming resources available online for learners who know where to look, cultural barriers remain.