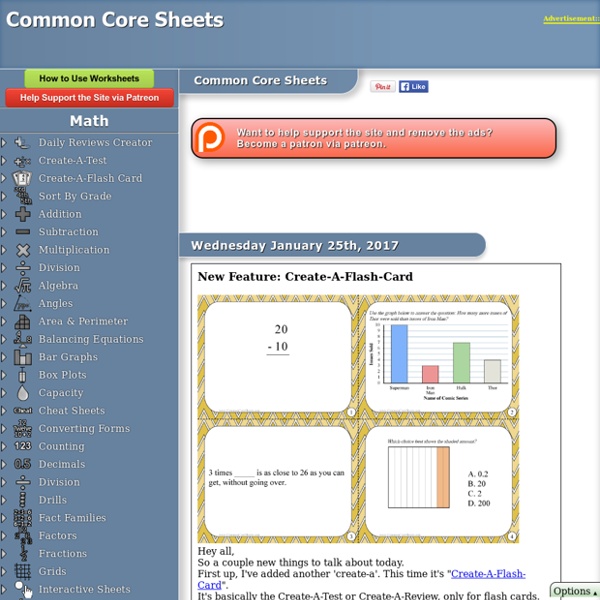 News and Updates Wednesday April 2nd, 2014 Create-A-Test So after 10 months, 12 completely different versions and several million lines of code, the 'Create-A-Test' is ready to go. Now comes the fun game I like to call, 'See how many bugs we can find'. Keep in mind this is like a super super super early version and things can and will change.

HTML5 Tutorial - Audio Let's have something fun to start with. We are now talking about web browser supporting audio file in native, just like how <img> tag is supported since 1994. HTML5 is likely to put an end to audio plug-in such as Microsoft Windows Media player, Microsoft Silverlight, Apple QuickTime and the infamous Adobe Flash. If you don't see a audio player control in the dotted box above, your web browser probably don't support the audio tag.

Designing Shifts-Aligned Interventions in the Math Classroom As teachers, we want to help all kids learn and when we’re faced with the realization that some students just aren’t “getting it,” we work to figure out how to catch kids up. It’s a prevalent struggle many educators grapple with and a frequent conversation in schools: How do we address unfinished learning in math and fill gaps in student understanding? Over the course of my career I have seen, all too often, students behind grade level denied access to grade-level mathematics, in an effort to catch them up or “fill the holes.” All students deserve access to content-rich instruction at their grade level, and when students have unfinished learning from previous grades, teachers need to take appropriate action—and that doesn’t mean reverting solely to materials and content from previous grades.

Matter: Definition and Overview What is matter? Matter is everything around you. Atoms and compounds are all made of very small parts of matter. Visual Math Improves Math Performance - YouCubed Mathematics educators have long known that engaging students in visual representations of mathematics is extremely helpful for their learning. When youcubed offered “How Close to 100” as an activity for learning math facts with visual representations, teachers across the world were thrilled and responded with thousands of tweets showing students learning by playing the game. Some of the world’s top mathematicians engage almost entirely with visual mathematics. For example, Maryam Mirzakhani, arguably the most important mathematician of our time, works almost entirely visually. In news articles she is shown sketching ideas on large pieces of paper on her kitchen table, Maryam joked to reporters that her 3 year old daughter probably thinks she is an artist.

Physics for Kids: Wave Behavior Science >> Physics for Kids When waves encounter new mediums, barriers, or other waves they can behave in different ways. In physics these behaviors are described using some of the terms below. Reflection The word "reflection" is used in everyday life to describe what we see in a mirror or on the surface of the water. In physics, a reflection is when a wave encounters a new medium that acts as a barrier, causing the wave to return to the original medium.

Matt Vaudrey For students to become self-directed learners and constructive members of society, they should direct their own behavior to impact their circumstance. Instead of teachers yelling and nagging, music cues can direct the student action. Instead of micro-managing (“Damien, take out your notebook.”), we’re helping students direct themselves and manage their own time. This develops a sense of confidence, especially among students with special needs, who will thrive under this structure.

CU Science Discovery Interested in teaching physics in your classroom? The Physics for Fun resources will introduce key topics in physics through the use of videos and activities developed for students in grades 4-8. Video Introduction to Physics for Fun Convection Connection Electricity 10 EdTech Tools for Encouraging Classroom Collaboration By Rachelle Dene Poth Today’s technology offers so many options for educators and students that deciding on where to begin can be overwhelming. To get started, think about one new approach that could be the catalyst for positive change in your classroom.