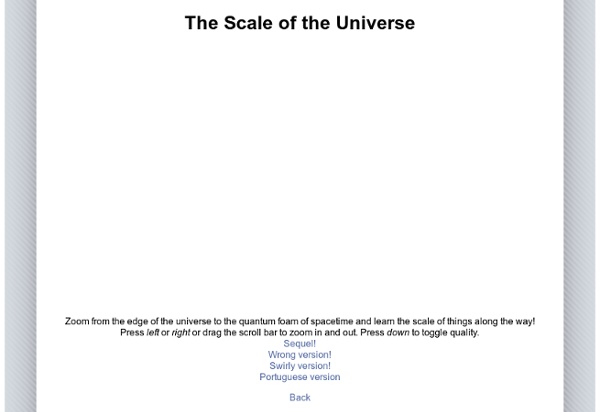 Konstantin Tsiolkovsky Intro BiographyTsiolkovsky, Konstantin Eduardovich (1857-1935). Konstantin E. Tsiolkovsky State Museum of the History of Cosmonautics Russian physicist and school teacher, regarded as the founder of modern rocket theory. 'The Cosmic Connection' "We are like the inhabitants of an isolated valley in New Guinea who communicate with societies in neighboring valleys (quite different societies, I might add) by runner and by drum. When asked how a very advanced society will communicate, they might guess by an extremely rapid runner or by an improbably large drum. They might not guess a technology beyond their ken. And yet, all the while, a vast international cable and radio traffic passes over them, around them, and through them...

Greek Mythology Resource Page Greek Mythology Resource Page Greek mythology refers to the entire corpus of fantastic and heroic stories used by ancient Greek people to make sense of the world in which they lived. Though they are studied now mainly from a literary and cultural perspective, for the people of the classical Greek world, they were the facts of religious life. Greek mythology was intricately bound up in notions of cosmology , the study of the origin and nature of the universe. Natural phenomena in the observable world were attributed to gods from the earliest times; this helped Greek people understand and cope with the natural world. As eras progressed, Greek thinkers developed an intricate, coherent view of the whole universe incorporating religious and philosophical elements.

Brane cosmology Brane cosmology refers to several theories in particle physics and cosmology related to string theory, superstring theory and M-theory. Brane and bulk[edit] The central idea is that the visible, four-dimensional universe is restricted to a brane inside a higher-dimensional space, called the "bulk" (also known as "hyperspace"). If the additional dimensions are compact, then the observed universe contains the extra dimensions, and then no reference to the bulk is appropriate.

The Elegant Universe: Series ... The Elegant Universe: Part 3 PBS Airdate: November 4, 2003 NARRATOR: Now, on NOVA, take a thrill ride into a world stranger than science fiction, where you play the game by breaking some rules, where a new view of the universe pushes you beyond the limits of your wildest imagination. This is the world of "string theory," a way of describing every force and all matter from an atom to earth, to the end of the galaxies—from the birth of time to its final tick, in a single theory, a "Theory of Everything." Our guide to this brave new world is Brian Greene, the bestselling author and physicist.

Greetings from the Children of Planet Earth : Universe  In 1977, NASA sent a pair of unmanned probes named Voyager 1 and Voyager 2 into space. Among the infrared spectrometers and radio receivers included on each probe were identical copies of the same non-scientific object: the Voyager Golden Record. Sheathed in a protective aluminum jacket, the Record is a 12-inch gold-plated copper disk containing sounds and images chosen to portray the diversity of life on Earth: bird calls, whale songs, the sounds of surf, wind, and thunder, music from human cultures, and some 55 greetings in a range of languages, alive and dead. Like lonely time capsules, the records, aboard their still-functioning hosts, have long since left our solar system.