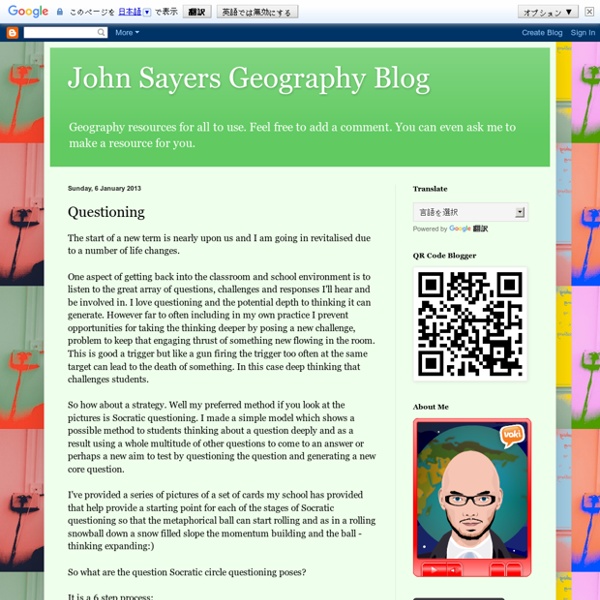 The start of a new term is nearly upon us and I am going in revitalised due to a number of life changes. One aspect of getting back into the classroom and school environment is to listen to the great array of questions, challenges and responses I'll hear and be involved in. I love questioning and the potential depth to thinking it can generate. However far to often including in my own practice I prevent opportunities for taking the thinking deeper by posing a new challenge, problem to keep that engaging thrust of something new flowing in the room. So how about a strategy. I've provided a series of pictures of a set of cards my school has provided that help provide a starting point for each of the stages of Socratic questioning so that the metaphorical ball can start rolling and as in a rolling snowball down a snow filled slope the momentum building and the ball - thinking expanding:) So what are the question Socratic circle questioning poses? It is a 6 step process: Related:  questions

My account Sign in to continue to Skype No account? Create one! Sign-in options Terms of use Privacy & cookies Twitter Great Lessons 1: Probing Introduction In all the talk of improving teaching and learning, sometimes – no often – there is too much talk about the model OfSTED lesson. Too often this leads teachers into thinking of idealised lessons than can only be turned out in special circumstances or that Outstanding lessons require us to devise an elaborate box of tricks to show off with. However, as I have said elsewhere,it is the 99% of lessons that are never observed that really matter. So, we need to focus on things that we do every day. Two related ideas: 1) It is the spirit of an idea that is important, not the letter. 2) In improving as teachers, we are not collecting tools, we seeking to change our habits… the things we do automatically every day. I am planning to create a series of short posts called Great Lessons that focus on aspects of routine practice – because lessons can be routinely outstanding. Probe probe probe…. Great Lessons 1: Probing Questions That’s interesting, what makes you say that? Please read them.

Questioning - Top Ten Strategies “Learn from yesterday, live for today, hope for tomorrow. The important thing is to not stop questioning.” – Albert Einstein Questioning is the very cornerstone of philosophy and education, ever since Socrates ( in our Western tradition) decided to annoy pretty much everyone by critiquing and harrying people with questions – it has been central to our development of thinking and our capacity to learn. Indeed, it is so integral to all that we do that it is often overlooked when developing pedagogy – but it as crucial to teaching as air is to breathing. Most research indicates that as much as 80% of classroom questioning is based on low order, factual recall questions. Effective questioning is key because it makes the thinking visible: it identifies prior knowledge; reasoning ability and the specific degree of student understanding – therefore it is the ultimate guide for formative progress. 1. 2. 3. 4. 5. Q1. 6. 7. 8. 9. 10. Added Extras: Like this: Like Loading...

Webtool A Week | But Does It Help Students Learn? You can find a Symbaloo webmix of all the tools featured on the blog here. Feel free to share… Week 39: Google Whilst the way Google operate is not to everyone’s liking their products have begun to change the way many schools operate. 20 million students worldwide are using Google Apps according to Jeff Dunn in his article about going Google. From the now commonplace Google Docs for collaboration in the classroom, Forms for surveys, Chat for quick discussions to the less well known tools such as searching by reading level, Google has an increasing range of tools to help the teacher and student alike. There are an increasing number of Chrome extensions (tools that live inside of your Chrome Browser and provide additional functionality by connecting to other web utilities), 12 of which are discussed in this Edudemic article. If Android apps become available through a browser (a Chrome coloured Android robot has been spotted at Google HQ) then the popularity of Chromebooks would rocket.

Using Questioning to Stimulate Mathematical Thinking Good questioning techniques have long being regarded as a fundamental tool of effective teachers. Unfortunately, research shows that 93% of teacher questions are "lower order" knowledge based questions focusing on recall of facts (Daines, 1986). Clearly this is not the right type of questioning to stimulate the mathematical thinking that can arise from engagement in open problems and investigations. Many Primary teachers have already developed considerable skill in good questioning in curriculum areas such as Literacy and History and social studies, but do not transfer these skills to Mathematics. Teachers' instincts often tell them that they should use investigational mathematics more often in their teaching, but are sometimes disappointed with the outcomes when they try it. There are two common reasons for this. Types of Questions Within the context of open-ended mathematical tasks, it is useful to group questions into four main categories (Badham, 1994). 1. 2. 3. 4. 1. References

The Myth of Progress Within Lessons « kevenbartle's Blog My heckles are risen so I need to post this and post it quick. Let me nail my colours to the mast here and make a bold, unequivocal statement: There is no such thing as progress within lessons. And let me make a second, equally bold and unequivocal statement to back it up: The main perpetuators of the myth of ‘progress within lessons’ are leadership teams within schools, not Ofsted. Right, now that we all know where we are let me explain further, and let me start with my evidence that it is NOT Ofsted asking for the mythical ‘progress within lessons’ by picking out some key quotes from the Inspection Handbook rewritten as recently as December 2012. “The most important role of teaching is to promote learning and to raise pupils’ achievement.” Nothing any of us wouldn’t agree with in that and no sign of the phrase ‘progress in lessons’ either. “The judgement on the quality of teaching must take account of evidence of pupils’ learning and progress over time. But here comes the confession.

Six Degrees of Kevin Bacon Six Degrees of Kevin Bacon is a parlor game based on the "six degrees of separation" concept, which posits that any two people on Earth are six or fewer acquaintance links apart. That idea eventually morphed into this parlor game, wherein movie buffs challenge each other to find the shortest path between an arbitrary actor and prolific Hollywood character actor Kevin Bacon. It rests on the assumption that any individual involved in the Hollywood, California, film industry can be linked through his or her film roles to Kevin Bacon within six steps. The game requires a group of players to try to connect any such individual to Kevin Bacon as quickly as possible and in as few links as possible. It can also be described as a trivia game based on the concept of the small world phenomenon. In 2007, Bacon started a charitable organization named SixDegrees.org. History[edit] The headline of The Onion, a satirical newspaper, on October 30, 2002, was "Kevin Bacon Linked To Al-Qaeda".[7] Kevin Bacon

Guide to Developing Good Questions | Steve Mouldey This question development guide was one first developed in a previous school which I have updated recently. The Word version of this is formatted nicely but this gives a good idea of how it works: Brainstorm of your early ideas Questions/topics/areas/issues related to theme that you may be interested in developing further Relevance of your topic What big ideas and/or concepts will I learn about from doing this topic? How do my ideas for an inquiry so far relate to what we have been doing in class? Developing good inquiry questions There are two main types of questions: Questions which require you to simply gather information.Questions which require you to make a reasoned judgement about information. Here are some examples of the two types of question: Now that you have brainstormed some ideas, what is your final choice of a topic? What is the inquiry question you will use to explore this topic? To ensure you have a powerful inquiry question, use the following criteria: Yes (continue) No (continue)

Some thoughts on questioning….. DHS drama teacher, Learning Leader and occasional blogger Lesley Graney has been thinking about questioning…… There is a lot of chat about the Big 4 in our school. It’s everywhere; if only the big 4 were sleep, cheese, red wine and Strictly Come Dancing, it would be easy for me. But no, the Big 4 are ‘Challenge’, ‘Independence’, ‘Feedback’ and ‘Questioning’. For me it would be: Challenge - surely the most difficult with a name like that.Independence - I know we are all capable of it; we learn to walk, ride a bike, work out a new phone or in my case we don’t. So my easiest would be questioning. We started with questioning this week. I have tried to give feedback to my husband for example this evening when he said the plughole needed ‘defuzzing’ as the water is draining slow. So, back to questioning. Then actually I thought about it. Consider my husband and I again, who you are getting to know a lot about through these blogs. Me: “How was work today?” Him: “Fine” Son: “Yes” Like this:

Why I think SOLO taxonomy will help my Year 13s | teach.it.better Now, readers, I am assuming you have heard of SOLO taxonomy. If you haven’t, I recommend you check out this website from Pam Hook, or this blog from David Didau, or this blog from Tait Coles. When you’ve done that come back again. I started to hear about SOLO taxonomy mid way through my second PGCE placement, when a bunch of people I follow on Twitter started talking about it. It wasn’t the time or the place to start trying it out, so I held fire, stewed on it, and kept thinking. I very much like the way that SOLO builds on itself to allow students to evaluate their own learning and points to where they need to get to, so I was looking out for an opportunity to try using the techniques in my own teaching. That opportunity came about with my A2 biology classes, two quite different classes with five students in one and 10 in the other, with a mixed bag of grades at AS level. SOLO linked to summary questions – students decided which levels of thinking the questions demanded. Like this: