Everything you ever wanted to know about anarchism 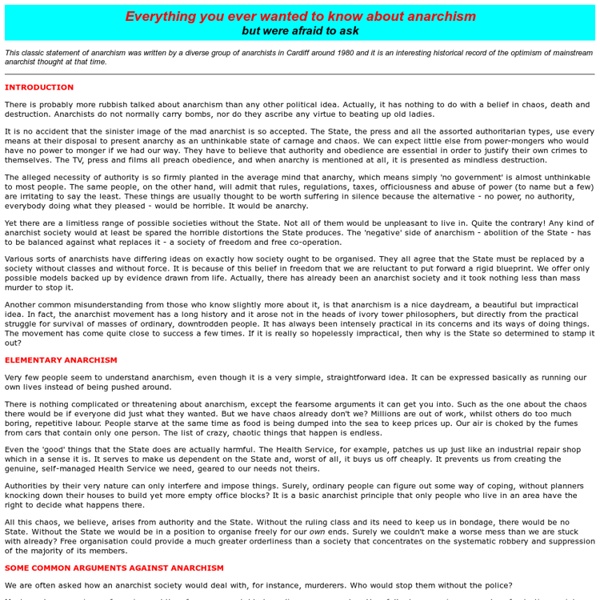 This classic statement of anarchism was written by a diverse group of anarchists in Cardiff around 1980 and it is an interesting historical record of the optimism of mainstream anarchist thought at that time. There is probably more rubbish talked about anarchism than any other political idea. Actually, it has nothing to do with a belief in chaos, death and destruction. Anarchists do not normally carry bombs, nor do they ascribe any virtue to beating up old ladies. It is no accident that the sinister image of the mad anarchist is so accepted. The State, the press and all the assorted authoritarian types, use every means at their disposal to present anarchy as an unthinkable state of carnage and chaos. The alleged necessity of authority is so firmly planted in the average mind that anarchy, which means simply 'no government' is almost unthinkable to most people. Yet there are a limitless range of possible societies without the State. Our rulers claim to be protecting us from each other.

TetraBox Light by Ed Chew Liquid to Light Designer Ed Chew takes a green step in the right direction with the TetraBox lamp, a light object made from discarded drink packets that would have otherwise ended up in landfills already packed to the brim. The design is achieved by unfolding the packets and refolding them into hexagonal and pentagonal sections that are then pieced together to form a geodesic sphere or any other desired shape. Here, the Epcot-like ball makes an attractive overhead light and casts an impressive web of shadows and shapes on the surrounding space. Designer: Ed Chew Faith of Our ForeFathers December 2006 The Founders are once again in vogue. More than 35 books have been published about them just since January according to Gordon Wood, the foremost authority on that era.

AI: Anonymous Introduces Anonymiss I am completely fascinated with the work/antics of the internet hactivists know as Anonymous. They have it seems, become at least in part, the Robin Hood of the intertubes. You may not agree with their motives or their actions but the undercover group has become downright legendary. They fearlessly stand up against organizations that terrify many such as, Scientology. They defend freedom of information by guaranteeing space for Wikileaks. They help oppressed, war ravaged people comunicate and *(as of the writing of this post) they do interesting little things like shutting down the hate-filled Westboro Baptist Church’s website, “godhatesfags.com” for 7 days (and counting.)

The Theory of Property, Chapter VIII Of the chapters from Proudhon's The Theory of Property which have not yet appeared in translation, the first is the Introduction compiled by Proudhon's friends, which surveyed his previous works; the third, fourth and fifth chapters amount to a summing up of Proudhon's scattered thoughts on the varieties of property, legal opinions on the subject, and the history of property. All of these contain interesting material, including the data on which the New Theory was constructed. But arguably the most interesting of the remaining chapters are the seventh, which explains in some detail the "equilibration" of property, and the eighth, "The Author's Critique Vindicated," in which Proudhon reflected on the development of his thought and responded to criticisms. I'm happy to be able to provide a working translation of Chapter VIII. Chapter VIII The Author’s Critique Vindicated.

Crystal River - The most beautiful river on earth [Pics] Cano Cristales - Crystal River. River of five colors, as the locals call it, originates in the south of the mountain chain Macarena, Colombia, and flows eastward to its confluence with the Guayabero river. In the Cano Cristales found five colors: yellow, blue, green, black and red. All of them are waste product of many algae and, depending on time of year, color saturation, or weakened or strengthened.

Zen Habits “We have more possibilities available in each moment than we realize.” - Thich Nhat Hanh By Leo Babauta I’m not a Zen monk, nor will I ever become one. However, I find great inspiration in the way they try to live their lives: the simplicity of their lives, the concentration and mindfulness of every activity, the calm and peace they find in their days. Neuroscience of Free Will Neuroscience of free will is the part of neurophilosophy that studies the interconnections between free will and neuroscience. As it has become possible to study the living brain, researchers have begun to watch decision making processes at work. Findings could carry implications for our sense of agency and for moral responsibility and the role of consciousness in general.[1][2][3] Relevant findings include the pioneering study by Benjamin Libet and its subsequent redesigns; these studies were able to detect activity related to a decision to move, and the activity appears to begin briefly before people become conscious of it.[4] Other studies try to predict activity before overt action occurs.[5] Taken together, these various findings show that at least some actions - like moving a finger - are initiated unconsciously at first, and enter consciousness afterward.[6]

Real examples of anarchism in history are problematic As near as I can tell, the united States of America is one of the best examples of an anarchist nation that has ever been, though it did not last terribly long before the public servants hired to govern subverted the peoples sovereignty and replaced the dejure united states with a corporation. From Bouviers Law Dictionary 6th edition: A chief ruler with supreme power; one possessing sovereignty. (q. v.) It is also applied to a king or other magistrate with limited powers.In the United States the sovereignty resides in the body of the people.

Related:  philosophy • the human mind • ideology - religion • Anarchism • Politics
Related:  Center for a Stateless Society   -  No Treason No. VI: The Constitution of No Authority   -  December 2013 | The Anarchist Library   -  Anarchosyndicalism by Rudolf Rocker - Chapter 1