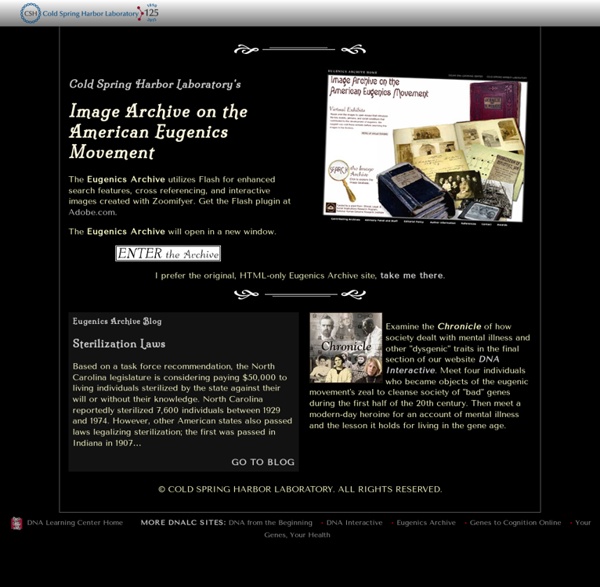 Cold Spring Harbor Laboratory's The Eugenics Archive utilizes Flash for enhanced search features, cross referencing, and interactive images created with Zoomifyer. Get the Flash plugin at Adobe.com. The Eugenics Archive will open in a new window. I prefer the original, HTML-only Eugenics Archive site, take me there. Eugenics Archive Blog Sterilization Laws Based on a task force recommendation, the North Carolina legislature is considering paying $50,000 to living individuals sterilized by the state against their will or without their knowledge. Examine the Chronicle of how society dealt with mental illness and other "dysgenic" traits in the final section of our website DNA Interactive.

The Georgia Guidestones - Another Gateway Into The New World Order/New Civilisation Enclosure For The Sheeple by Arthur Cristian "LET THESE BE GUIDESTONES TO AN AGE OF REASON" - TheGeorgiaGuideStones.com "A letter in stone to the editor of history, unsigned, and an inspiration to mischief" The message of the Georgia Guide Stones 1. Maintain humanity under 500,000,000 in perpetual balance with nature. Becoming Disabled Not long ago, a good friend of mine said something revealing to me: “I don’t think of you as disabled,” she confessed. I knew exactly what she meant; I didn’t think of myself as disabled until a few decades ago, either, even though my two arms have been pretty significantly asymmetrical and different from most everybody else’s my whole life. My friend’s comment was meant as a compliment, but followed a familiar logic — one that African-Americans have noted when their well-meaning white friends have tried to erase the complications of racial identity by saying, “I don’t think of you as black,” or when a man compliments a woman by saying that he thinks of her as “just one of the guys.” This impulse to rescue people with disabilities from a discredited identity, while usually well meaning, is decidedly at odds with the various pride movements we’ve come to know in recent decades. Slogans like “Black Is Beautiful” and “We’re Here, We’re Queer, Get Used to It!”

Agenda 21 For Your Own Good: Global Health Security Initiative Dr. Rima Laibow, Medical DirectorNatural Solutions Foundation The genocidal maniacs are at it again. The usual suspects (WHO, UN, IMF, World Bank, US, Rockefeller and Gates Foundations, etc.) have concocted a new scheme which is, quite literally, nothing short of Agenda 21 at the end of a gun, for your own good, of course. Rural Kids With Disabilities Hurt Most By Texas Cuts To Medicaid, Providers Say Intensive home-visits by physical, occupational and speech therapists have been "a lifesaver," for little Haylee Crouse, her mom Amanda (left) told Shots. Haylee, who is now 2, developed seizures and physical and intellectual disabilities after contracting meningitis when she was 8 days old. Wade Goodwyn/NPR hide caption toggle caption

THEY WANT US DEAD !! Eugenics Outlined !! While we are all focusing on the coming financial collapse, as bad as that is something much more sinister is in the works. It’s very subtle if you are not paying attention. But, to the aware, it’s blatant, insidious, and just as horrific as Hitler’s Germany. Thoughts of a tryborg The tryborg is always distanced by metaphor, guesswork and desire. When my leg suddenly beeps and buzzes and goes into “dead mode” — the knee stiffens; I walk like a penguin — the tryborg is alive without batteries. When I sound like a bomb in a liquor store, the tryborg hurries on, nonelectronic. Tryborgs want to be cyborgs. This is why they go to bed with Fitbit, brag about gigabit and buy kit with Bitcoin. They have an affinity for the it or the Id.

UN “Death Targets” Will Mean Reduced Healthcare for Elderly Elderly people in the United Kingdom and potentially worldwide are likely to be treated as “second-class citizens” and even denied life-saving medical treatment under proposed “highly unethical” United Nations “death targets,” healthcare and aging experts declared in an open letter last week. The radical UN “Sustainable Development Goals,” which would put virtually every realm of human activity in the crosshairs, include, among other controversial provisions, proposed global “targets” for reducing premature deaths from various causes. To meet those targets, the experts said, government-run healthcare systems such as the U.K. “National Health Service” (NHS) are likely to focus more resources on easier-to-save younger people — at the expense of the elderly whose deaths would not be counted as “premature.” Some critics are even saying the plan heralds the advent of “death panels.”

Point of view - How those who are differently abled want to be seen Photo One of my most memorable moments in high school came during my freshman year. A motivational speaker was addressing us in a huge assembly. I was seated with one of my best friends at the front of the auditorium, and the whole group was having an amazing time. The speaker was charismatic, exhibited a warm, jovial disposition and a wonderful sense of humor. I was smiling and laughing with the rest of the group. Eugenicists Finally Got Sterilants Added to the Drinking Water By Aaron and Melissa Dykes Compulsory abortion. Under-the-skin birth control implants.