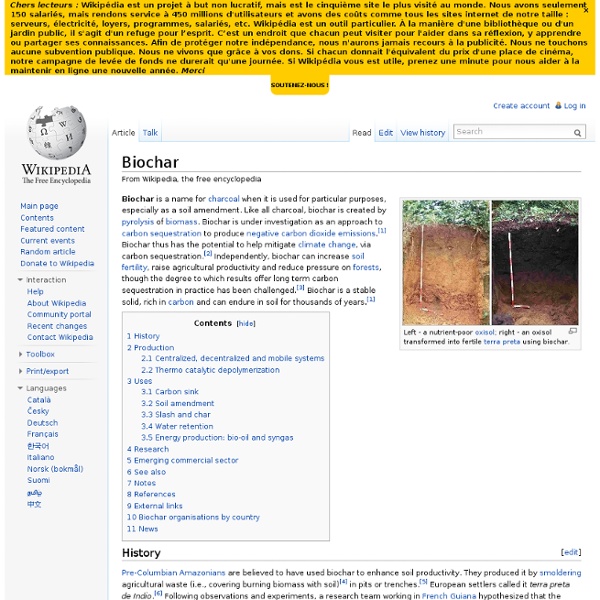 Biochar created through the pyrolysis process. History[edit] Left - a nutrient-poor oxisol; right - an oxisol transformed into fertile terra preta using biochar Pre-Columbian Amazonians are believed to have used biochar to enhance soil productivity. The term “biochar” was coined by Peter Read to describe charcoal used as a soil improvement.[9] Production[edit] Pyrolysis produces biochar, liquids, and gases from biomass by heating the biomass in a low/no oxygen environment. The Amazonian pit/trench method[6] harvests neither bio-oil nor syngas, and releases a large amount of CO2, black carbon, and other greenhouse gases (GHG)s (and potentially, toxins) into the air. Centralized, decentralized, and mobile systems[edit] In a centralized system, all biomass in a region is brought to a central plant for processing. Pyrolysis technologies for processing loose and leafy biomass produce both biochar and syngas.[15] Thermo-catalytic depolymerization[edit] Uses[edit] Carbon sink[edit] Soil amendment[edit] Related:  Permaculture

International Biochar Initiative | International Biochar Initiative Symphony of the Soil Tree Disease identification, symptoms, treatment options for tree diseases There are many different diseases that affect landscape trees and shrubs. Control of tree and shrub diseases cannot be properly accomplished until the disease pest is identified. Identification of tree and shrub diseases is crucial because, although most diseases can be controlled, there are some diseases that cannot be controlled. Disease control on landscape trees and shrubs can sometimes be accomplished by more than one method, depending on the particular disease that if infecting your landscape plants. Even if you are going to attempt to control a disease that is infecting your landscape trees or shrubs you should consider consulting a local arborist.

Carbon sink This diagram of the fast carbon cycle shows the movement of carbon between land, atmosphere, and oceans in billions of tons of carbon per year. Yellow numbers are natural fluxes, red are human contributions in billions of tons of carbon per year. White numbers indicate stored carbon. A carbon sink is a natural or artificial reservoir that accumulates and stores some carbon-containing chemical compound for an indefinite period. The process by which carbon sinks remove carbon dioxide (CO2) from the atmosphere is known as carbon sequestration. Public awareness of the significance of CO2 sinks has grown since passage of the Kyoto Protocol, which promotes their use as a form of carbon offset. General[edit] The natural sinks are: Absorption of carbon dioxide by the oceans via physicochemical and biological processesPhotosynthesis by terrestrial plants Natural sinks are typically much bigger than artificial sinks. Carbon sources include: Kyoto Protocol[edit] Soils[edit] Oceans[edit] Forests[edit]

Tree Encyclopedia Trees have three principle features that distinguish them from all other plants. First, they have a woody stem, roots and branches which do not die back in winter, but continue to grow year after year. From the moment of its germination, a tree remains visible; from the tallest Sequoia to the smallest garden fruit tree, this principle of growth remains constant. Trees live longer than any other organism on earth. Trees commonly live more than 1,000 years, and many grow considerably older. A bristlecone pine, Pinus longaeva, at Schulman Grove in California has been documented both by core drilling (a pencil-thin core is taken from the tree’s trunk, and the rings are counted) and by carbon-dating as being 4,700 years old. Pando (Latin for “I spread”), aka “the trembling giant,” is a clone colony of male quaking aspen, (Populus tremuloides) a single living organism identified by identical genetic markers. Family Aceraceae: Maples are some of our most familiar and beloved trees.

Carbon sink: General Regrarian Handbook *1. CLIMATE CHAPTER’ eHANDBOOK (77 pages) available NOW for only AUD$5!! *ON SALE as a FULL HARDCOPY late-2015!! The ‘Regrarians Handbook’ is a succinct & sequential outline of over 300 integrated methodologies and techniques that have been proven over many years of universal application to work towards regenerating human & livestock’s lives along with production landscapes. Darren has joined forces with ‘Permaculture: A Designers’ Manual‘ (1988) Designer, Illustrator & Editor Andrew Jeeves in what promises to be the production of an ‘instant classic’. “…The layout by Andrew Jeeves is informative, attractive and simple; his drawings express concisely points sometimes belaboured in the text. Mark Hankins, Right by Design, New Scientist, December 1989 (of ‘Permaculture: A Designers Manual’) The size, feel & format of this book is that of a handbook such that it is an easy and ready accompaniment to the emerging Regrarians kit. The secondary inspiration was that of the late P.A.

Carbon sink: Kyoto protocol Allan Savory’s TED talk is wrong, and the benefits of holistic grazing have been debunked. Photo by Vyacheslav Oseledko/AFP/Getty Images When Allan Savory finished his TED talk early last month, foodies worldwide collectively salivated. In roughly 22 minutes, Savory, a biologist and former member of the Rhodesian Parliament, challenged the conventional wisdom blaming livestock for the degradation of global grasslands into hardpan deserts. It has long been a basic tenet of environmentalism that 10,000 years of overgrazing has caused this desertification. Environmentalists insist that to restore degraded landscapes, we must reduce the presence of cattle, eat less meat, and allow ecosystems to repair themselves. Savory, who admits that he’s suggesting “the unthinkable,” wants humans to do the exact opposite: Add cattle to the deserts, manage them with obsessive precision, and eat more meat. Savory’s hypothesis hinges on what he calls “holistic management and planned grazing.” Savory’s speech quickly attracted praise. Well, not so fast.

Biosequestration: Biochar Perennial Vegetables to Plant Once and Enjoy For Years To Come!!! Perennial vegetables—crops that you plant just once and harvest year after year—are relatively rare in North American gardens. With the exception of asparagus, rhubarb and artichokes, most gardeners are probably unaware of the tasty, extremely low-maintenance bounty that can be harvested when many annual crops aren’t available. A Brief History of Perennial Crops According to Perennial Vegetables by Eric Toensmeier, most North American gardening and farming traditions come from Europe, where there are very few perennial crops except fruits and nuts. Cold and temperate Eurasian agriculture centered around livestock, annual grains and legumes, and early European settlers to North America simply brought their seeds and their cultivation methods with them, including draft animals for plowing up the soil every year. However, in more temperate and tropical areas of the world, including much of North America, perennial root, starch and fruit crops were actively bred, selected and cultivated.