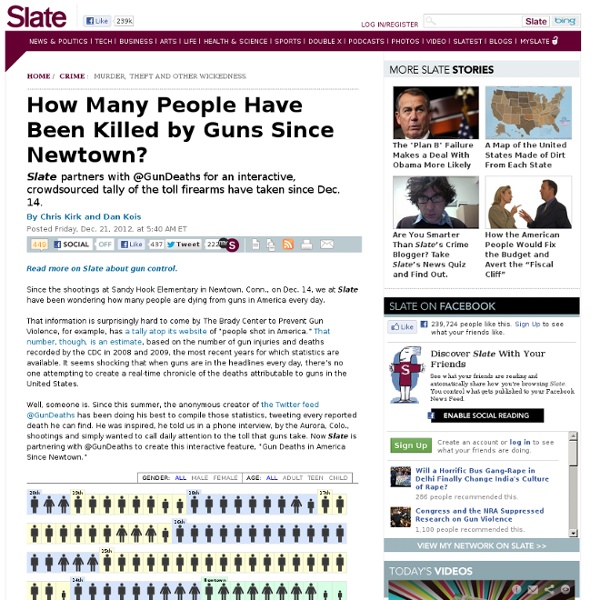 The answer to the simple question in that headline is surprisingly hard to come by. So Slate is collecting data for our crowdsourced interactive. This data is necessarily incomplete (click here to see why, and to learn more about @GunDeaths, the Twitter user who helped us create this interactive). But the more people who are paying attention, the better the data will be. You can help us draw a more complete picture of gun violence in America. If you know about a gun death in your community that isn’t represented here, please email a link to a news report to slatedata@gmail.com. Update, Dec. 31, 2013: After a year of gun deaths, Slate is retiring this project. Click a marker below to filter incidents by that location. © OpenStreetMap contributors Any Age Group Adult Teen Child Matched Deaths: 12,042 or more between Newtown and Dec. 31, 2013 Fetching latest data Show Methodology Each person under 13 years of age is designated "child"; from 13 to 17: "teen"; 18 and older: "adult." Related:  US of A and What You may Face

A tribute to Aaron Swartz, the young hero of freedom for information, driven to his death on Friday by the US Department for Justice | Neurobonkers Aaron Swartz was (amongst many, many other things) the co-author of RSS, the fantastic technology I described only in my last blog post as the technology that should be your New Year’s resolution to adopt: “If you make one New Year’s resolution this year, make it to throw out the papers and switch to sources you trust using RSS. I guarantee you, you won’t look back.” Swartz developed RSS at the age of 14, before going on to help create Creative Commons and drop out of Stanford to help build Reddit. While in school, Swartz developed a working free online encyclopaedia that anyone could access and edit, long before Wikipedia was created. Swartz was instrumental in the fight against SOPA that ended almost exactly a year ago. “It is hard to believe this story, hard to remember how close it all came to actually passing, hard to remember that it could have gone any other way. An excerpt from Aaron Swartz’s keynote speech in Washington DC on May 21st 2012, which you can view below.

Hacker Who Exposed Steubenville Rapists Raided By FBI, Faces Ten-Year Prison Sentence In April, the FBI quietly raided the home of the hacker known as KYAnonymous (whose real name is Deric Lostutter) in connection with his role in the Steubenville rape case. Today he spoke out for the first time about the raid and his motivations for pursuing the Steubenville rapists.Lostutter may deserve more credit than anyone for turning Steubenville into a national outrage. After a 16-year-old girl was raped by two members of the Steubenville High football team last year, he obtained and published tweets and Instagram photos in which other team members had joked about the incident and belittled the victim.Lostutter says he played no role in the hacking the Steubenville team’s fan page; he points out that another hacker, Batcat, has publicly taken the credit.

Verified Warnings From Former U.S. Presidents About the “Invisible Government” Running the U.S. With “No Allegiance To the People” “Those who do not learn from history are doomed to repeat it.”- George Santayana Past presidents of the United States and other high profile political leaders have repeatedly issued warnings over the last 214 years that the U.S. government is under the control of an “invisible government owing no allegiance and acknowledging no responsibility to the people.” According to six of our former presidents, one vice-president, and a myriad of other high profile political leaders, an invisible government that is “incredibly evil in intent” has been in control of the U.S. government “ever since the days of Andrew Jackson” (since at least 1836). As a result, “we have come to be one of the worst ruled, one of the most completely controlled and dominated, governments in the civilized world—no longer a government by free opinion, no longer a government by conviction and the vote of the majority, but a government by the opinion and the duress of small groups of dominant men.” “Mr. The Federal Reserve

Gun Play: An American Tragedy, in Three Acts Act I. Broadway and 103 rd Street. New York” (1955) Copyright William Klein, all rights reserved. A week after Jared Lee Loughner–accused multiple murderer and, in the words of The New York Times, “curious teenager and talented saxophonist”–went on one of those shooting sprees that Americans seem to regard as the price we pay for our god-given right to an armamentarium straight out of the NRA-wet-dream gun showroom in The Matrix, it was business as usual at the Crossroads of the West gun show at the Pima County Fairgrounds. The seat of Pima County, as irony would have it, is Tucson, where Loughner emptied 31 rounds from his Glock semiautomatic pistol into a crowd at a political event, wounding 14 and killing six, a nine-year-old girl among them. Because our founding myth of rugged individualism demands it. Point taken that the coat-hanger antennae on Loughner’s tinfoil helmet were not, in all likelihood, receiving transmissions from some ideological NORAD in Roger Ailes’s basement.

One Era's Traitor Is Another Era's Whistle-Blower - By J. Dana Stuster When the Guardian named Edward Snowden as the source behind a series of leaks last week on National Security Agency surveillance programs, the backlash was swift. In a rare show of bipartisanship, several members of Congress -- including House Speaker John Boehner, Sen. Dianne Feinstein, and former U.N. Ambassador John Bolton -- labeled the 29-year-old contractor a traitor. The Guardian's profile, meanwhile, characterized Snowden as "one of America's most consequential whistleblowers" and compared him to Daniel Ellsberg. The Guardian isn't alone in comparing Snowden to Ellsberg, who leaked a secret Pentagon-authored history of the Vietnam War, known as the Pentagon Papers, to reporters at the New York Times and Washington Post in 1971. But the reaction to Snowden's leaks is in many ways different than the response Ellsberg received when the Pentagon Papers were published four decades ago. When Ellsberg did face harsh criticism, it was often personal in nature.

Timelines: Watergate At a sentencing hearing, Judge Sirica reveals a letter sent to him by James McCord. The letter states that the defendants were all pressured by the administration to plead guilty and that the burglary had not been an independent operation – other people knew of the plan: “I will state the following to you at this time which I hope may be of help to you in meting out justice in this case: 1. There was political pressure applied to the defendants to plead guilty and remain silent. 2. Perjury occurred during the trial in matters highly material to the very structure, orientation, and impact of the government’s case, and to the motivation and intent of the defendants. 3. Happiness Is a Worn Gun In the 1943 noir thriller The Fallen Sparrow, John Garfield asks the police inspector whether his permit to carry a gun is still valid. “Good for a year,” the cop says wearily. “Why did you want to carry a gun?” “To shoot people with, sweetheart!” Garfield snarls, as the cop’s face falls comically. I think about the ambivalence of that line every time I strap on my .38—mixing the brutality of shooting people with that wise-guy sweetheart. Garfield’s were the days when people who wanted a concealed-weapon permit had to convince the police to issue one. Nowadays, most states let just about anybody who wants a concealed-handgun permit have one; in seventeen states, you don’t even have to be a resident. Good thing or bad? The gun-carrying revolution started in Florida, which in 1987 had a murder rate 40 percent higher than the national average. At the same time, though, I was a little jealous of those getting permits. I ended up taking two gun-carry courses.

Ashley Jessica, Student Activist, Says She Was Violated During TSA Pat-Down A 27-year-old Ph.D. student says a TSA agent touched her vaginal area during a pat-down at a California airport; however, a representative told The Huffington Post the agents followed procedure. Ashley Jessica , a psychology student from Toronto who has recently campaigned to raise awareness about invasive TSA practices , told HuffPost that she and her mother chose to opt out of a full-body scan at San Diego International Airport on May 23. Because they opted out, TSA agents said they had to give her an "extensive pat-down." Jessica and her mother filmed the whole thing, and video of the pat-down has gone viral since being posted online Sunday. About halfway into the procedure (at the 4:35 minute mark in the video above), a TSA agent feels the area between Jessica's breasts, and Jessica puts up her hands as if to protect herself from further touching. Less than two minutes later, the agent appears to run her hands all the way up the inside of Jessica's leg. "She just touched my vagina!"

An Open Letter to Ann Coulter | The World of Special Olympics John Franklin Stephens The following is a guest post in the form of an open letter from Special Olympics athlete and global messenger John Franklin Stephens to Ann Coulter after this tweet during last night’s Presidential debate. Dear Ann Coulter, Come on Ms. Coulter, you aren’t dumb and you aren’t shallow. I’m a 30 year old man with Down syndrome who has struggled with the public’s perception that an intellectual disability means that I am dumb and shallow. I thought first of asking whether you meant to describe the President as someone who was bullied as a child by people like you, but rose above it to find a way to succeed in life as many of my fellow Special Olympians have. Then I wondered if you meant to describe him as someone who has to struggle to be thoughtful about everything he says, as everyone else races from one snarkey sound bite to the next. Because, Ms. After I saw your tweet, I realized you just wanted to belittle the President by linking him to people like me. Well, Ms.

Related:
Related:  US of A and What You may Face