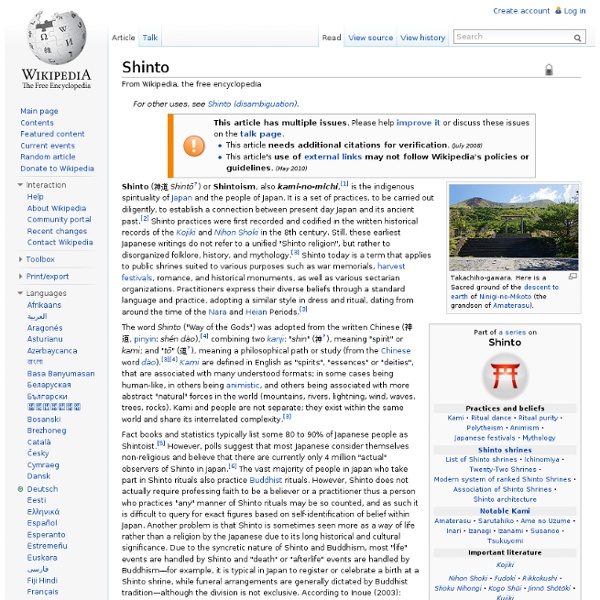 Shinto priest and priestess. Shinto (神道, Shintō?), also kami-no-michi,[note 1] is the indigenous religion of Japan and the people of Japan.[2] It is defined as an action-centered religion,[3] focused on ritual practices to be carried out diligently, to establish a connection between present-day Japan and its ancient past.[4] Founded in 660 BC according to Japanese mythology,[5] Shinto practices were first recorded and codified in the written historical records of the Kojiki and Nihon Shoki in the 8th century. Still, these earliest Japanese writings do not refer to a unified "Shinto religion", but rather to a collection of native beliefs and mythology.[6] Shinto today is a term that applies to the religion of public shrines devoted to the worship of a multitude of gods (kami),[7] suited to various purposes such as war memorials and harvest festivals, and applies as well to various sectarian organizations. According to Inoue (2003): Types of Shinto Shrine Shinto (神社神道, Jinja-Shintō?) Kami

Kojiki Kojiki (古事記?, "Record of Ancient Matters") is the oldest extant chronicle in Japan, dating from the early 8th century (711–712) and composed by Ō no Yasumaro at the request of Empress Gemmei.[1] The Kojiki is a collection of myths concerning the origin of the four home islands of Japan, and the Kami. Along with the Nihon Shoki, the myths contained in the Kojiki are part of the inspiration behind Shinto practices and myths, including the misogi purification ritual.[2][3][4][5] Structure[edit] The Kojiki contains various songs/poems. While the historical records and myths are written in a form of Chinese with a heavy mixture of Japanese elements, the songs are written with Chinese characters that are only used to convey sounds.

Japanese mythology Japanese myths, as generally recognized in the mainstream today, are based on the Kojiki, the Nihon Shoki, and some complementary books. The Kojiki, or "Record of Ancient Matters", is the oldest surviving account of Japan's myths, legends and history. The Shintōshū describes the origins of Japanese deities from a Buddhist perspective, while the Hotsuma Tsutae records a substantially different version of the mythology. Shintoshu The Shintōshū (神道集?) is a Japanese story book in ten volumes believed to date from the Nanboku-chō period (1336–1392).[1] It illustrates with tales about various shrines the Buddhist honji suijaku theory, according to which Japanese kami were simply local manifestations of the Indian gods of Buddhism. This theory, created and developed mostly by Tendai monks, was never systematized, but was nonetheless very pervasive and very influential.[2] The book had thereafter great influence over literature and the arts.[1] History[edit] The book is believed to have been written during the late Nanboku-chō period, either during the Bunna or the Enbun era.[3] It carries the note Agui-saku (安居院作?

Kami Amaterasu, one of the central kami in the Shinto faith Kami (Japanese: 神?) are the spirits or phenomena that are worshipped in the religion of Shinto. Graphene’s cousin silicene makes transistor debut Seven years ago, silicene was little more than a theorist’s dream. Buoyed by a frenzy of interest in graphene — the famous material composed of a honeycomb of carbon just one atom thick — researchers speculated that silicon atoms might form similar sheets. And if they could be used to build electronic devices, these slivers of silicene could enable the semiconductor industry to achieve the ultimate in miniaturization. This week, researchers took a significant step towards realizing that dream, by unveiling details of the first silicene transistor1. Although the device’s performance is modest, and its lifetime measured in mere minutes, this proof of concept has already been causing a stir at conferences, says Deji Akinwande, a nano­materials researcher at the University of Texas at Austin who helped to make the transistor.

In Praise of Shadows: Ancient Japanese Aesthetics and Why Every Technology Is a Technology of Thought – Brain Pickings By Maria Popova At least since Plato’s Allegory of the Cave, we’ve seen shadows as a metaphor for the illusory and wicked aspects of life, for that which we must eradicate in order to illuminate the truth and inherent goodness of existence. And yet we forget that the darkness they cast evidences the light — palpable proof without which we might not appreciate or even notice the radiance itself. The 1933 gem In Praise of Shadows (public library) by Japanese literary titan Junichiro Tanizaki (July 24, 1886–July 30, 1965) belongs to that special order of slim, enormously powerful books that enchant the lay reader with an esoteric subject, leaving a lifelong imprint on the imagination — rare masterpieces like Robin Wall Kimmerer’s love letter to moss and Glenn Kurtz’s paean to the pleasures of playing guitar. Tanizaki, translated here by Thomas J. Harper and Edward G.

15 Amazing Animated Short films We all love short animated films, but creating short film is very hard task. Putting whole story in 5 to 10 minutes is not easy. Can you imagine?