Guide to the Golden Ratio 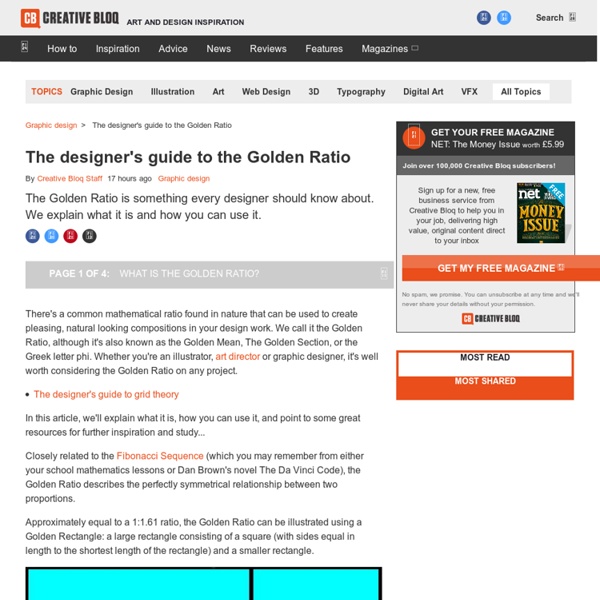 There's a common mathematical ratio found in nature that can be used to create pleasing, natural looking compositions in your design work. We call it the Golden Ratio, although it's also known as the Golden Mean, The Golden Section, or the Greek letter phi. Whether you're an illustrator, art director or graphic designer, it's well worth considering the Golden Ratio on any project. The designer's guide to grid theory In this article, we'll explain what it is, how you can use it, and point to some great resources for further inspiration and study... Closely related to the Fibonacci Sequence (which you may remember from either your school mathematics lessons or Dan Brown's novel The Da Vinci Code), the Golden Ratio describes the perfectly symmetrical relationship between two proportions. If you remove this square from the rectangle, you'll be left with another, smaller Golden Rectangle. Golden Ratio in use Greek architecture The final result is a building that feels entirely in proportion.

How to Use Golden Section Proportions In Your Designs “The power of the golden section to create harmony arises from its unique capacity to unite different parts of a whole so that each preserves its own identity and yet blends into the greater pattern of a single whole.” — György Dóczi, The Power of Limits Golden section proportions can be found in both nature and man-made structures. They exist in the proportions of human beings, the growth patterns of plants, animals, and insects, and structures like Stonehenge and the Parthenon. Golden section proportions are also present in Greek art, writing, and architecture, and in the spiral shape of shells. Whether we’ve been genetically programmed to like them or we find them pleasing due to all the examples around us, the golden section has clearly been a part of nature and human creation throughout history. We have a preference toward objects that use golden proportions.

Applying the Golden Ratio to Web Layouts and Objects by anthony on 10/21/10 at 5:36 pm 1.618 is a number all serious designers should know. It’s known as the golden ratio found throughout nature, art and architecture. Embracing the UX Spectrum As an industry, we have the tendency to think and talk about user experience design in either a Web or a software context, where the demand to humanize complex interactive systems has been the highest. But if we define a user as a person who uses a thing or a system, then the Web and software contexts represent just one space in which people have a “user experience.” Other equally important contexts abound, including products and services, advertising and marketing, gaming, and events and environments. In all contexts and throughout history, empathy, creativity, and systems thinking have played important roles in designing user experiences. But until the creation of complex software systems, the role and deeper practices of a UX designer weren’t necessary.

How To Design Using The Fibonacci Sequence Not too long ago I posted an article that outlined ten laws to design by. I was ecstatic when the post received ample attention and fan fare. I might be a bit jaded, but I have grown very sick of the “fast food” list style design articles that seem to get so much attention these days. While this type of post is entertaining, it will hardly do anything push the design community.

Bisection of Yin and Yang The flag of South Korea (and of Kingdom of Korea from 1883) contains the ancient yin-yang symbol (Taijitu in Chinese, Tomoye in Japanese and Taegeuk in Korean) that represents the struggle, merger and co-existence of two opposites (could be hot/cold, male/female, sky/earth, moon/sun, etc.) In the diagram Yin (the negative aspect) is rendered in black, with Yang (the positive aspect) rendered in white. The symbol is composed of two regions of a circle separated by two semicircles of half the radius of the big circle. The famous English puzzlist H.

Should You Build a Responsive Site or a Native Mobile App? You know your business needs a mobile presence, but how to best offer that experience — without breaking the bank — is something tons of companies, both big and small, continue to struggle with. Carl asks: Is it worth it for me to have a mobile app (or should I just have a responsive site)? How do I know whether I'm getting bang for my buck? If Carl had asked this question back in 2009 or 2010, it would have been phrased, "Do I need a native app or is a mobile-optimized website enough?" In 2011 and 2012, the question again would have shifted to "native app or mobile web app?"