Nadia schmidle. Hosted. With Galleries Closed, a Moment for Net Artists to Shine. LONDON — In early March, the artist Olia Lialina was installing a solo retrospective at the Arebyte gallery in East London, feeling anxious about whether anyone would be able to attend: Italy had already announced quarantine measures and other European countries looked likely to follow. 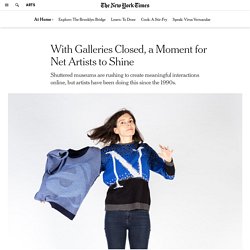 Sure enough, by the time of the opening a few weeks later, Britain was in lockdown. She had to make the event online-only. The story will be familiar to artists, musicians and performers whose work has been interrupted, or simply obliterated, by the pandemic. Best Effort Network. Gallery — Best Effort Network. Self-Portrait. Big Glitter, O.Lialina & M.Tyka.

Blingee Treasure Trove screencast. All You Need is Link. OpenX zone at Ars Electronica in 1999. 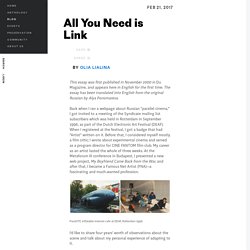 Photo: Sabine Starmayr. A Zoo is a more expensive type of event that requires at least bringing the FNA to the location of the exhibition and accommodating her there. In the exhibition space, beside the usual computer with an inscription on the wall and an open browser, a chair is put down, and on that chair—oh, isn’t that great—sits the FNA in person. Best Effort Network. War. Last Real Net Art Museum. My Boyfriend Came Back From The War. online since 1996. Russian artist Olia Lialina's "My Boyfriend Came Back From The War" (MBCBFTW) is a key work of 1990s artistic practice on the web, marking its 20th anniversary in 2016. 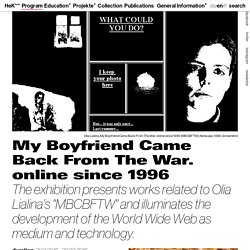 It has a pioneering character, as an interactive narrative and a work of net art. MBCBFTW presents two people who are trying to talk to each other about a war, after the fact. "My Boyfriend Came Back From the War" is a unique case and a fascinating example of a work that has inspired artists for 20 years; they cite it time and again, they focus on it or reinterpret it through remixing. Lialina has collected these works in her private archive under the title Last Real Net Art Museum. So far she has gathered 27 versions, 13 of which she has chosen for the HeK exhibition. A publication linked to the exhibition will present both the works themselves and key essays on the development of Internet culture. Artists: Twintig Jaar Op Het Web: My Boyfriend Came Back From The War. Mbcbftw mona ulrich component list 15 june 2016. ☼ Olia Lialina, 'Summer' (2013) Summer (2013). 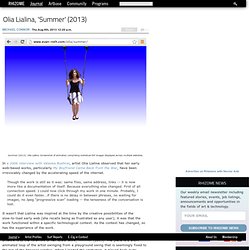 Olia Lialina. Screenshot of animation comprising individual GIF images displayed across multiple websites. In a 2006 interview with Valeska Buehrer, artist Olia Lialina observed that her early web-based works, particularly My Boyfriend Came Back from the War, have been irrevocably changed by the accelerating speed of the internet. Though the work is still as it was: same files, same address, links -- it is now more like a documentation of itself. Because everything else changed. Sometimes a GIF Is All You Need.

Today and yesterday were glorious days in New York: August had come, the sun was shining, the weather was just right. 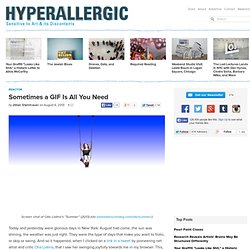 They were the type of days that make you want to frolic, or skip or swing. And so it happened, when I clicked on a link in a tweet by pioneering net artist and critic Olia Lialina, that I saw her swinging joyfully towards me in my browser. This, I thought, is the perfect expression of summer. Lialina’s piece “Summer” is a GIF, and at first glance, a fairly simple one: it features an image of the artist swinging to and fro against a blank background that bleeds from bright blue to white.

Her works are archived and available to view online at Art Teleportacia, Olia's web gallery. Her first seminal project, "My boyfriend came back from the war" is a cinematic, text and .gif-based choose-your-own adventure experience. She is also a prolific writer and theorist; her research focuses on the vernacular of the Internet and digital folklore. Recently, Olia's interrogation of this subject matter has been enriched by her and husband Dragan Espenschied's documentation of the Geocities archive. "Animated GIF Model", 2005 What kinds of experiences did you have with computers before the advent of the Internet? "Anna Karenina Goes to Paradise", 1996 What kinds of films did you show at the film club?

"My boyfriend came back from the war", 1996 "Summer", 2013 It's dependent on a whole community. "Online Newspapers: French Edition", 2013. Olialia - if you want to clean your screen. Rich User Experience, UX and Desktopization of War. This essay is based on my lecture given at Interface Critique, Berlin University of the Arts, November 7th 2014. 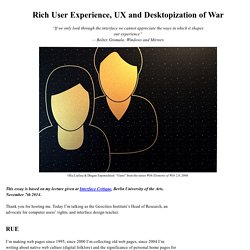 Thank you for hosting me. Today I’m talking as the Geocities Institute’s Head of Research, an advocate for computer users’ rights, and interface design teacher. I’m making web pages since 1995, since 2000 I’m collecting old web pages, since 2004 I’m writing about native web culture (digital folklore) and the significance of personal home pages for the web’s growth, personal growth and development of HCI. So I remember very well the moment when Tim O’Reilly promoted the term Web 2.0 and announced that the time of Rich User Experience has begun. This buzzword was based on Rich Internet Applications, coined by Macromedia, that literally meant their Flash product. Notes on Being Net Artist.

18 years of being net artist were 18 years of explaining difference in between net art and web art explaining difference in between net.art and net art removing the dot from net.artist being called media artist being mixed up with the austrian artist Lia being called cyberfeminist getting to know that i'm in a show from vanity search getting requests to send screenshots in 300 DPI refusing to show the work offline refusing to show the work without address bar rejecting Internet Explorer (and later Safari) being told that there is no fee for online works being interviewed about net art economic models praying that it works in the next browser version updating for the next browser version making no back ups editing files directly on server ignoring the rumors that net art is dead learning HTML teaching web design these are not the only things that happened to me,but the ones that were there from the very beginning and never went away. 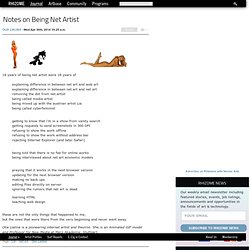 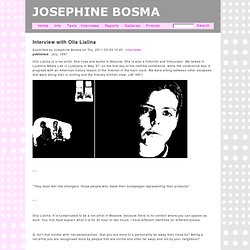 She lives and works in Moscow. She is also a filmcritic and filmcurator. We talked in Ljudmila Media Lab in Ljubljana in May '97, on the first day of the nettime conference, while the conference was in progress with an American history lesson of the Internet in the main room. We were sitting between other escapees that were doing mail or surfing and the friendly kitchen crew. Dragan Espenschied to Lead Rhizome's Digital Conservation Program. After an international search, leading digital preservation specialist, artist, and musician Dragan Espenschied has been appointed to lead Rhizome's growing and award-winning Digital Conservation program. 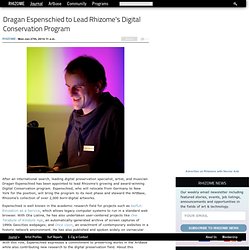 Espenschied, who will relocate from Germany to New York for the position, will bring the program to its next phase and steward the ArtBase, Rhizome’s collection of over 2,000 born-digital artworks. Espenschied is well known in the academic research field for projects such as bwFLA: Emulation as a Service, which allows legacy computer systems to run in a standard web browser. Hallo Surfer.

Contemporary Home Computing. "Once Upon" by Olia Lialina & Dragan Espenschied. Olia Lialina's Site - Front Page - Neocities. Olia lialina (GIFmodel) PAGES IN THE MIDDLE OF NOWHERE (former FIRST AND THE ONLY REAL NET ART GALLERY) Olia lialina cv. Olia Lialina. Olia Lialina (born in Moscow) is a pioneer Internet artist and theorist as well as an experimental film and video critic and curator. Lialina studied film criticism and journalism at Moscow State University, then followed with art residencies at C3 (Budapest,) and Villa Walderta (Munich,).[1] She founded Art Teleportacia, a web gallery of her work, which also features links to remakes of her most famous work "My boyfriend came back from the war" [2] and was one of the organizers and later, director of Cine Fantom, an experimental cinema club in Moscow co-founded in 1995 by Lialina with Gleb Aleinikov, Andrej Silvestrov, Boris Ukhananov, Inna Kolosova and others.

"[My boyfriend came back from the war" is a site where there are many frames consisting of sentences and pictures. The user has a choice of clicking what frame they want. This relates to the Borgesian view because the user is allowed to choose their own path. Works[edit] References[edit] Further reading[edit] External links[edit] Olia lialina is the shit, man. she has been making... - cheeeeeezzzzzz itsssss chriiiiiisssssttt. New Mindmap. A G A T H A   A P P E A R S. Olia Lialina - Agatha Appears, Net Art 1997. WYSOCKA, E. Agatha Re-Appears, net art resoration project, 2008. Restoration Project: Olia Lialina’s early net.art piece “Agatha Appears” from the Collection of C³ Center for Culture & Communication Foundation. Olialialina.