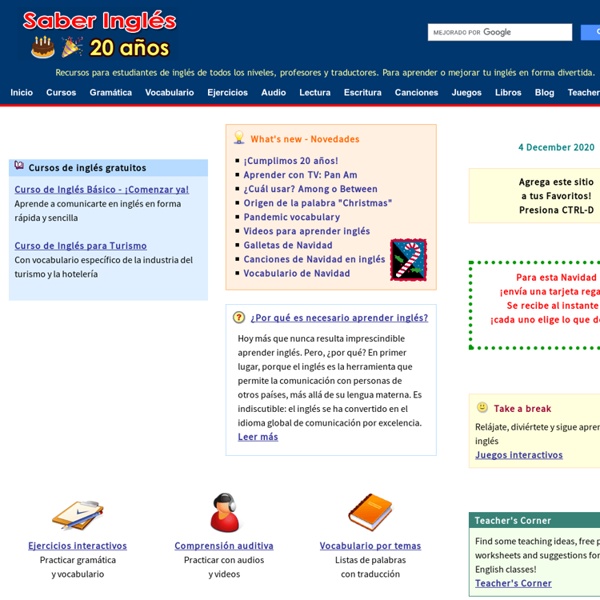 ESL Teacher Handouts, Grammar Worksheets and Printables Free English grammar and vocabulary worksheets and printable handouts, for English language and English as a Second Language (ESL) teachers and instructors to use in the classroom or other teaching environment. Get our ESL handouts newsfeed: Beginner English Handouts Late Bloomers - Late In Life Success Late bloomers are people who achieved proficiency in some skill later than they are normally expected to. The key word is “expected.” School Is a Machine, Learning Is Not English Listening Comprehension Exercises - Ejercicios de comprensi n auditiva de ingl s - Para aprender o practicar ingl s Eleanor Johnson is a professor in the English and Comparative literature department at Columbia University who attributes a growing of language to the explosion of electronic communication. Eleanor Johnson: "I think that text messaging has made students believe that it's far more acceptable than it actually is to just make screamingly

60 eBooks gratuitos sobre Traducción e Interpretación « infotra 60 eBooks gratuitos sobre Traducción e Interpretacióna Texto completoI nfo T rad 28 de septiembre de 2012 Mapping best multilingual business practices in the EU European Commission. The digital age and globalisation have together changed the European business environment for good. As companies and their employees deal with different languages and cultures on a daily basis, multilingualism can no longer be considered just as an asset or a competitive advantage, but rather as a fact of life.

A List of The Best Free Digital Storytelling Tools for Teachers 1- ZimmerTwins It is all about creative storytelling. ZimmerTwins is a web2.0 tool that allows students to give vent to their imaginative powers and exercise their storytelling skills from early stages to advances ones. Common Errors in English Usage Go to list of errors. What is an error in English? The concept of language errors is a fuzzy one. I’ll leave to linguists the technical definitions. English language teaching At Easter it’s our custom (more out of nostalgia than out of any sense of religiosity, it has to be said) to listen to the Lebanese singer Fayrouz singing traditional Easter songs from that region. Here’s a taster: What language is she singing in, though? Reading the comments thread on the YouTube site is revealing: In a new book, Suresh Canagarajah (2013) reminds us that this blending, mixing and meshing of languages, rather than being the exception, is the norm. Quoting Pattanayak (1984), he cites the example of south Asia, to the effect that, ‘if one draws a straight line between Kashmir and Kanyakumari and marks, say, every five or ten miles, then one will find that there is no break in communication between any two consecutive points.’