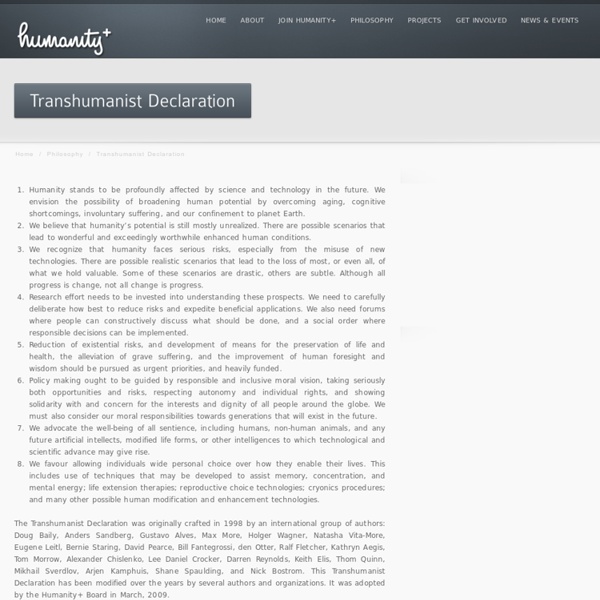 Humanity stands to be profoundly affected by science and technology in the future. We envision the possibility of broadening human potential by overcoming aging, cognitive shortcomings, involuntary suffering, and our confinement to planet Earth.We believe that humanity’s potential is still mostly unrealized. There are possible scenarios that lead to wonderful and exceedingly worthwhile enhanced human conditions.We recognize that humanity faces serious risks, especially from the misuse of new technologies. There are possible realistic scenarios that lead to the loss of most, or even all, of what we hold valuable. Some of these scenarios are drastic, others are subtle. Related:  Transhumanism

Transhumanist FAQ The Transhumanist FAQ was developed in 1998 and authored into a formal FAQ in 1999 through the inspirational work of transhumanists, including Alexander Chislenko, Max More, Anders Sandberg, Natasha Vita-More, James Hughes, and Nick Bostrom. Several people contributed to the definition of transhumanism, which was originated by Max More. Greg Burch, David Pearce, Kathryn Aegis, and Anders Sandberg kindly offered extensive editorial comments. Over the years, this FAQ has been updated to provide a substantial account of transhumanism. The Transhumanist FAQ 3.0, as revised by the continued efforts of many transhumanists, will continue to be updated and modified as we develop new knowledge and better ways of accounting for old knowledge which directly and indirectly relate to transhumanism. Thank you to all who have contributed in the past and to those who offer new insights to this FAQ! GeneralWhat is transhumanism? PracticalitiesWhat are the reasons to expect all these changes? References:

Transhumanist Values 1. What is Transhumanism?Transhumanism is a loosely defined movement that has developed gradually over the past two decades.[1] It promotes an interdisciplinary approach to understanding and evaluating the opportunities for enhancing the human condition and the human organism opened up by the advancement of technology. Attention is given to both present technologies, like genetic engineering and information technology, and anticipated future ones, such as molecular nanotechnology and artificial intelligence.The enhancement options being discussed include radical extension of human health-span, eradication of disease, elimination of unnecessary suffering, and augmentation of human intellectual, physical, and emotional capacities. Other transhumanist themes include space colonization and the possibility of creating superintelligent machines, along with other potential developments that could profoundly alter the human condition.

EDCMOOC: Utopias and Dystopias Film Festival I signed up some time ago to do the Coursera online course E-Learning and Digital Cultures (#edcmooc). I am going to blog some of my thoughts on the course over the next five weeks, starting with week one’s film festival about Utopias and Dystopias. Bendito Machine III Bendito Machine III shows quite a dystopian vision. Ecological Implications New technologies make older technologies obsolete leading to more throw away artifacts and creating landfill with all the flow on effects that carries with it. Social Implications Individuals are putting their obsession with technology ahead of relationships, allowing technology to set cultural expectations and agendas. I adore this tweet from Edel Horan: Bendito Machine reminiscent of public fervor over new Apple products! I feel the pressure to be an early adopter of technology but there are financial and time investments relating to new technology. Inbox Inbox looks at the limitations and advantages of online communications. Thursday Agency New Media

H-: Wrestling with Transhumanism Transhumanism for me is like a relationship with an obsessive and very neurotic lover. Knowing it is deeply flawed, I have tried several times to break off my engagement, but each time it manages to creep in through the back door of my mind. In How We Became Posthuman,1 I identified an undergirding assumption that makes possible such predictions as Hans Moravec’s transhumanist fantasy that we will soon be able to upload our consciousness into computers and leave our bodies behind. There are, of course, many versions of transhumanism, and they do not all depend on the assumption I critiqued. How can we extract the valuable questions transhumanism confronts without accepting all the implications of transhumanist claims? As a literary scholar, I consider the locus classicus for re-framing transhumanist questions to be science fiction and speculative fiction, jointly signified by SF. We seek to void all limits to life, intelligence, freedom, knowledge, and happiness.

Is Google Making Us Stupid? Illustration by Guy Billout "Dave, stop. Stop, will you? I can feel it, too. I think I know what’s going on. For me, as for others, the Net is becoming a universal medium, the conduit for most of the information that flows through my eyes and ears and into my mind. I’m not the only one. Bruce Friedman, who blogs regularly about the use of computers in medicine, also has described how the Internet has altered his mental habits. Anecdotes alone don’t prove much. It is clear that users are not reading online in the traditional sense; indeed there are signs that new forms of “reading” are emerging as users “power browse” horizontally through titles, contents pages and abstracts going for quick wins. Thanks to the ubiquity of text on the Internet, not to mention the popularity of text-messaging on cell phones, we may well be reading more today than we did in the 1970s or 1980s, when television was our medium of choice. Reading, explains Wolf, is not an instinctive skill for human beings.

JET 14(1) - April 2005 - Bostrom - Transhumanist Thought Nick Bostrom Faculty of Philosophy, Oxford University Journal of Evolution and Technology - Vol. 14 Issue 1 - April 2005 PDF Version Abstract This paper traces the cultural and philosophical roots of transhumanist thought and describes some of the influences and contributions that led to the development of contemporary transhumanism. 1. The human desire to acquire new capacities is as ancient as our species itself. Ceremonial burial and preserved fragments of religious writings show that prehistoric man and woman were deeply disturbed by the death of loved ones. The quest to transcend our natural confines, however, has long been viewed with ambivalence. Medieval Christianity had similarly conflicted views about the pursuits of the alchemists, who tried to transmute substances, create homunculi in test tubes, and invent a panacea. Benjamin Franklin longed wistfully for suspended animation, foreshadowing the cryonics movement: 2. 3.

EDC MOOC The Blog: Humanism & Posthumanism One's views about digital technology and "digital people"--even what one identifies as questions, problems, issues, advantages, worries, etc.--will depend upon one's other assumptions and values. Here, I want to talk about two different philosophical systems or stances: humanism and posthumanism. Humanism Humanism comes from the Enlightenment (The idea of the "human" changed significantly with the turn to secular science and the increased emphasis on "reason.") In addition to human exceptionalism, humanism entails other values and assumptions. Though most of our commonsense, everyday mainstream ideas, ideals, and values in the global North are fundamentally, if not largely informed by humanism, there are many, many problems with humanism. Humanism can be problematized on other grounds as well.

The Politics of Transhumanism The Politics of Transhumanism Version 2.0 (March 2002) James J. Hughes, Ph.D. Originally Presented at the 2001 Annual Meeting of the Society for Social Studies of Science Cambridge, MA November 1-4, 2001 For more information please contact: James Hughes Ph.D. Transhumanism is an emergent philosophical movement which says that humans can and should become more than human through technological enhancements. When it comes to political memes, transhumanism in its purest form doesn't have any fixed niche. Since the advent of the Enlightenment, the idea that the human condition can be improved through reason, science and technology has been mated with all varieties of political ideology. With the emergence of cyberculture, the technoutopian meme-plex has found a natural medium, and has been furiously mutating and crossbreeding with political ideologies. In early issues of Extropy magazine More began to publish successive versions and expositions of his “Extropian Principles.” 1. 2. 3. 4. 5. 5.

Our #EdcMooc paths to Information and knowledge | Eleni's First Steps The last three weeks have been extremely rich and creative although I haven’t come back to the blog to record my thoughts. One of the things that keeps coming back in my mind are the words of George Roberts few months ago when I started the first UK-based MOOC “First Steps in Learning and Teaching in Higher Education“. During the orientation, George encouraged us to dive into the #fslt12 curriculum (the hashtag of the aforementioned MOOC) and make it ours. At that time, his words didn’t make a lot of sense but my enthusiasm was enough to “dive” into the resources, engage with participants and spend a considerable amount of time on further exploration. George’s words make perfect sense to me while engaging with #edcmooc as a student and while trying to encourage, as an educator, my students to internalize their course content and experience it as a whole. This experience is going to help me immensely in a PhD program…so many research questions swirling through my head! What do you do?

Democratic Transhumanism James Hughes Ph.D. Public Policy Studies 71 Vernon St. Hartford, CT 06106 james.hughes@trincoll.edu An earlier, but substantially different, version of this essay was published in Transhumanity, April 28, 2002 version française Abstract Biopolitics is emerging as an axis of modern politics alongside economic politics and cultural politics. But biopolitics only complicates the preexisting political landscape, they doesn’t supplant it. Democratic transhumanism stems from the assertion that human beings will generally be happier when they take rational control of the natural and social forces that control their lives. Politics of the 21st Century Political movements in the industrialized world in the 20th century have been defined by two broad axes, economic politics and cultural politics. In Table One below, movements and parties can be parsed into one corner or another of the terrain, or the many points in between. Democratic Transhumanism Technoutopianism and the Left