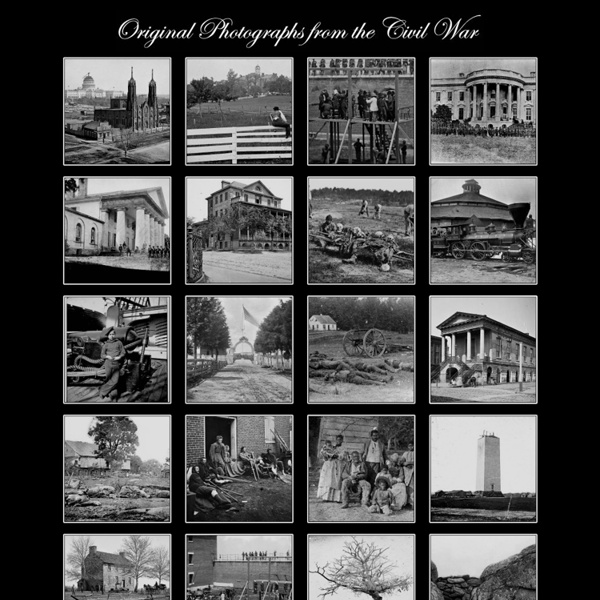 A List of Books | 623 of the Best Books ever Written - StumbleUpon - Nightly Découvrez le premier réseau social dédié au passé, qui va bouleverser votre vision de la généalogie et de l'Histoire. The Battle Over Reconstruction As the Civil War drew to a close, the social, political and economic conditions within the rebellious southern states fueled discussion about how to restore them to the Union. This series of lesson plans will examine the nature and extent of some of these social, political and economic conditions and how they worked to shape the debate about restoring southern states to the Union as well as their lasting impact in shaping the national debate in the years following Reconstruction. Beyond the obvious material destruction, there was more to reconstruct in the South than buildings, farms, manufacturing and railroads—there were social and political relationships to rebuild. Yet, it is impossible to understand Reconstruction fully without a grasp of the social and economic upheaval the war brought with it. For the people living through the times, this upheaval created a situation that demanded immediate attention. Many in Congress, however, had a different view. President Ulysses S.

The Emancipation Proclamation: three ... 11 Things You May Not Know About Ancient Egypt — HISTORY Lists Ancient Egypt stood as one of the world’s most advanced civilizations for nearly 3,000 years and created a culture so rich that it has spawned its own field of study. But while Egyptian art, architecture and burial methods have become enduring objects of fascination, there is still a lot you probably don’t know about these famed builders of the pyramids. From the earliest recorded peace treaty to ancient board games, find out 11 surprising facts about the Gift of the Nile. Along with King Tut, perhaps no figure is more famously associated with ancient Egypt than Cleopatra VII. For over two centuries the Egyptians fought against the Hittite Empire for control of lands in modern day Syria. After a long day’s work along the Nile River, Egyptians often relaxed by playing board games. While they may have been publicly and socially viewed as inferior to men, Egyptian women enjoyed a great deal of legal and financial independence.

Diogenes of Sinope - Wikipedia, the free encyclopedia - Nightly Diogenes of Sinope was a controversial figure. His father minted coins for a living, and when Diogenes took to debasement of currency, he was banished from Sinope.[1] After being exiled, he moved to Athens to debunk cultural conventions. Diogenes modelled himself on the example of Hercules. He believed that virtue was better revealed in action than in theory. He used his simple lifestyle and behaviour to criticise the social values and institutions of what he saw as a corrupt society. After being captured by pirates and sold into slavery, Diogenes eventually settled in Corinth. Life[edit] Diogenes was born in the Greek colony of Sinope on the south coast of the Black Sea, in either 412 BC or 404 BCE.[2] Nothing is known about his early life except that his father Hicesias was a banker.[6] It seems likely that Diogenes was also enrolled into the banking business aiding his father. In Athens[edit] Diogenes arrived in Athens with a slave named Manes who abandoned him shortly thereafter.

'Lost' Medieval City Discovered Beneath Cambodian Jungle A lost city known only from inscriptions that existed some 1,200 years ago near Angkor in what is now Cambodia has been uncovered using airborne laser scanning. The previously undocumented cityscape, called Mahendraparvata, is hidden beneath a dense forest on the holy mountain Phnom Kulen, which means "Mountain of the Lychees." The cityscape came into clear view, along with a vast expanse of ancient urban spaces that made up Greater Angkor, the large area where one of the largest religious monuments ever constructed — Angkor Wat, meaning "temple city" — was built between A.D. 1113 and 1150. [See Images of Angkor Wat, New Temple City] Aerial view of Angkor Wat, showing the moat and causeway and the central tower surrounded by four smaller towersCredit: Alexey Stiop | Shutterstock.com Traces of temples In a series of archaeological mapping projects, scientists had previously used remote sensing to map subtle traces of Angkor. Lost medieval city Weird landscape

1000 novels everyone must read: the definitive list | Books | theguardian.com - Nightly Selected by the Guardian's Review team and a panel of expert judges, this list includes only novels – no memoirs, no short stories, no long poems – from any decade and in any language. Originally published in thematic supplements – love, crime, comedy, family and self, state of the nation, science fiction and fantasy, war and travel – they appear here for the first time in a single list. Feel we've left off a crucial book? Comedy Crime Family and self Love

PARIS 1914 Into the Future: Social Media Info Elevates Big Data Predictions Your tweets do have meaning. To your family and friends, of course and maybe to some colleagues. But we are referring to a bigger meaning for your online musings, in the bundled and aggregated sense. Sophisticated investors and some government agencies are increasingly analyzing social media data to enhance their own statistical predictive capabilities. Tweets, Facebook likes and shared articles are among the clues. Downsides do exist. Skepticism about the worth of bundled tweets or likes is already abundant. Ariana Cha reports in the Washington Post: From a trading desk in London, Paul Hawtin monitors the fire hose of more than 340 million Twitter posts flying around the world each day to try to assess the collective mood of the populace.The computer program he uses generates a global sentiment score from 1 to 50 based on how pessimistic or optimistic people seem to be from their online conversations.