The art of the metaphor - Jane Hirshfield 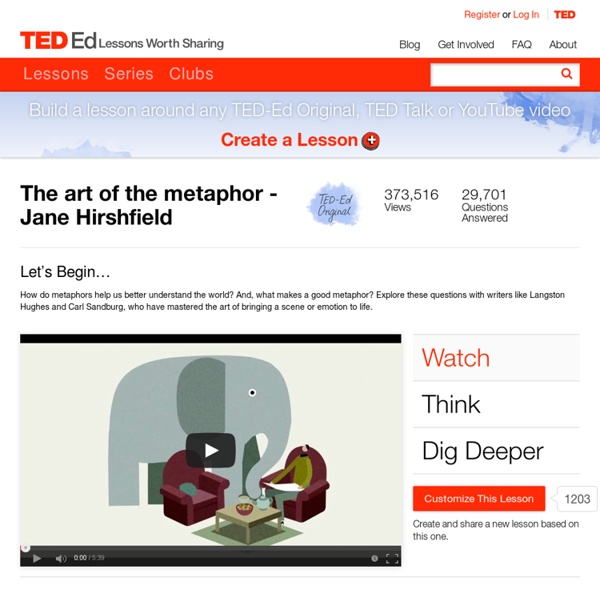 To explore metaphors more fully on your own, there are three directions you can go. The first is simply to start noticing whenever you meet one. Jane Hirshfield slipped metaphors into many of the things she said in this lesson. You might listen to it again and make a list of some of the metaphors she used along the way, without pointing out that they were metaphors. Then go to any random web blog or newspaper or magazine article and just start reading until you’ve found a half dozen metaphors. A second direction to explore metaphors further is to practice inventing metaphors yourself. A third way to learn more about metaphor is to read about it directly. A few specific resources: Almost every modern textbook or handbook about poetry has a chapter on metaphor. BBC Radio ran a terrific 45 minute program on metaphor (with a good “recommended books” list on the program’s web page). Metaphors We Live By, by George Lakoff and Mark Johnson (IL: University of Chicago Press, 1980) Related:  poetry work • Interesting • About Writing

Using poems, quotations and proverbs The activities below are ways for students to enjoy the music of English. Poems Choose short simple poems that are close to students' lives. These poems are not for heavy analysis. Give pairs a poem to read together. Learning things by heart is very much a part of school systems and it gives students a sense of achievement to know a poem in English. Recommended poems and poets to try are:; Michael Rosen, Roger McGough or John Hegley . Quotations from Literature Another popular form of learning by heart and reading aloud are the famous sayings from our own literature or the work of philosophers, historians and politicians. They can spark interest in a theme, a person or a writer They are a good basis for discussion They carry universal messages across cultural boundaries They can be learned and recited for their music and beauty They are a common feature of language studies Students feel a sense of achievement in learning them well and you can do a 'quote of the week' throughout the year

List of cognitive biases Cognitive biases are tendencies to think in certain ways that can lead to systematic deviations from a standard of rationality or good judgment, and are often studied in psychology and behavioral economics. There are also controversies as to whether some of these biases count as useless, irrational or whether they result in useful attitudes or behavior. For example, when getting to know others, people tend to ask leading questions which seem biased towards confirming their assumptions about the person. The research on these biases overwhelmingly involves human subjects. Decision-making, belief, and behavioral biases[edit] Many of these biases affect belief formation, business and economic decisions, and human behavior in general. Social biases[edit] Most of these biases are labeled as attributional biases. Memory errors and biases[edit] Common theoretical causes of some cognitive biases[edit] Individual differences in decision making biases[edit] Debiasing[edit] See also[edit] Notes[edit]

Plot (narrative) Plot and Story. Plot is the cause‐and‐effect sequence of events in a story.[1] Plot is a narrative (and, traditionally, literary) term defined as the events that make up a story, particularly: as they relate to one another in a pattern or in a sequence; as they relate to each other through cause and effect; how the reader views the story; or simply by coincidence. Authors are generally interested in how well this pattern of events accomplishes some artistic or emotional effect. An intricate, complicated plot is called an imbroglio, but even the simplest statements of plot may include multiple inferences, as in traditional ballads.[2] A plot is composed of causal events, which are a series of sentences linked by "and so." A plot was defined in 1927 by the English novelist E. A plot is causality. A tornado picks up a house and drops it on a witch, a little girl meets some interesting traveling companions, a wizard sends them on a mission, and they melt a witch with a bucket of water.

Using poems to develop productive skills This is a great motivator. Poems are often rich in cultural references, and they present a wide range of learning opportunities. For me, the aim is to teach English through poetry, not to teach the poetry itself, so you don't need to be a literature expert. Most of the tried and tested activities used regularly by language teachers can be adapted easily to bring poetry into the classroom. Communicative speaking activities Working on pronunciation Writing activities Some pros and cons Conclusion Communicative speaking activities Before doing any productive work, I like to give my students plenty of pre-reading activities so that they are adequately prepared. As a way in to a poem, I might play some background music to create the atmosphere, show some pictures to introduce the topic, and then get students to think about their personal knowledge or experience which relates to this topic. Working on pronunciation It can be fun to get students to rehearse and perform a poem.

Metaphor and metonymy In the unconscious: condensation and displacement[edit] In 1957, Jacques Lacan, inspired by an article by linguist Roman Jakobson, argued that the unconscious has the same structure of a language, and that condensation and displacement are equivalent to the poetic functions of metaphor and metonymy.[1][2][7] References[edit] ^ Jump up to: a b Roman Jakobson and Halle, Morris (1956) Two Aspects of Language and Two Types of Aphasic Disturbances in Fundamentals of Language. External links[edit] Learning Resources | Shel Silverstein “My beard grows to my toes, I never wear no clothes, I wraps my hair Around my bare, And down the road I goes.” – “My Beard” Where the Sidewalk Ends “Needles and pins, Needles and pins, Sew me a sail To catch me the wind.” – from “Needles and Pins” Falling Up “Millie McDeevit screamed a scream So loud it made her eyebrows steam.” – from “Screamin’ Millie” Falling Up “I will not play at tug o’ war. I’d rather play at hug o’ war” – from “Hug O’ War” Where the Sidewalk Ends “If you are a dreamer, come in.” – from “Invitation” Where the Sidewalk Ends “Anything can happen, child, ANYTHING can be.” – from “Listen to the Mustn’ts" Where the Sidewalk Ends “Balancing my ABCs Takes from noon to half past three. I don’t have time to grab a T Or even stop to take a P.” – “Alphabalance” Falling Up “Last night I had a crazy dream That I was teachin’ school.

Budget of NASA As a federal agency, the National Aeronautics and Space Administration (NASA) receives its funding from the annual federal budget passed by the United States Congress. The following charts detail the amount of federal funding allotted to NASA each year over its past sixty-year history (1958–2018) to operate aeronautics research, unmanned and manned space exploration programs. Annual budget[edit] NASA's budget as percentage of federal total, from 1958 to 2017 Seen in the year-by-year breakdown listed below, the total amounts (in nominal dollars) that NASA has been budgeted from 1958 to 2018 amounts to $601.31 billion. By way of comparison, total spending over the 50-year period 1958–2008 by the National Science Foundation was roughly one-fifth of NASA's expenditures: $101.5 billion. Notes for table: Sources for a part of these data: U.S. NASA employment[edit] Reference: 1. 2. 3. 4. 5. 6. 7. 8. Cost of Apollo program[edit] NASA's budget peaked in 1966, during the Apollo program See also[edit]