The Human Genome Is Far More Complex Than Scientists Thought 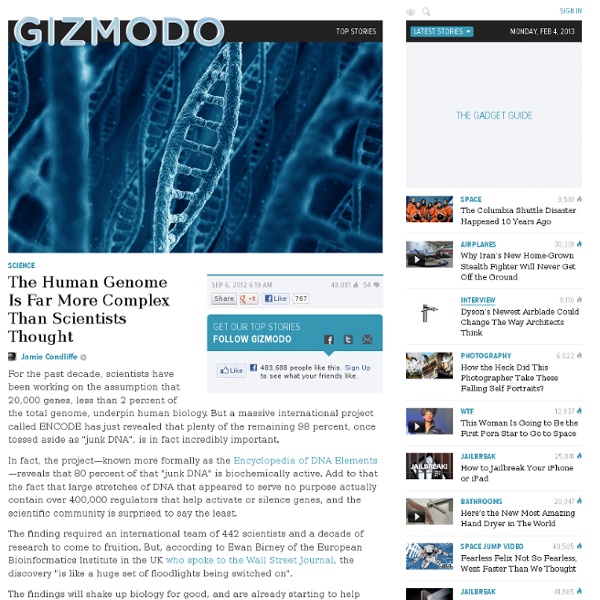 100 Very Cool Facts About The Human Body The Brain The human brain is the most complex and least understood part of the human anatomy. There may be a lot we don’t know, but here are a few interesting facts that we’ve got covered. Nerve impulses to and from the brain travel as fast as 170 miles per hour. Ever wonder how you can react so fast to things around you or why that stubbed toe hurts right away? Hair and Nails While they’re not a living part of your body, most people spend a good amount of time caring for their hair and nails. Facial hair grows faster than any other hair on the body. Internal Organs Though we may not give them much thought unless they’re bothering us, our internal organs are what allow us to go on eating, breathing and walking around. The largest internal organ is the small intestine. Bodily Functions We may not always like to talk about them, but everyone has to deal with bodily functions on a daily basis. Sneezes regularly exceed 100 mph. Sex and Reproduction Senses Aging and Death

How To See An Aura: Learn To See The Hunan Aura Auras are an energy field that is present around every living creature and some inanimate objects. The aura is generated by the 7 major chakras and the 114 minor chakras in the human body. What Color Is Your Aura And What Does It Mean? Find Out Here! Your thoughts, emotions, actions, and even dietary choices can impact the aura. The aura is something like a shield. Truly, the ability to see an aura isn't a novelty, but a very practical thing to be able to do. Complexity: It’s Not That Simple Complexity theory has been around for a generation now, but most people don’t understand it. I often read or listen to consultants, ‘experts’ and media people who proffer ludicrously simplistic ‘solutions’ to complex predicaments. Since it seems most people would prefer things to be simple, these ‘experts’ always seem to have an uncritical audience. Complexity theory argues that simple, complicated, complex and chaotic systems have fundamentally different properties, and therefore different approaches and processes are needed when dealing with issues and challenges in each of these types of systems. As the diagram above illustrates, natural systems (both social and ecological) are inherently complex. Human invention, for the most part, uses biomimicry, i.e. we attempt to manufacture, to replicate mechanically, things that appear to work in nature. Natural systems are highly effective but inefficient due to their massive redundancy (picture a tree dropping thousands of seeds).

Anatomical terms of location Standard anatomical terms of location deal unambiguously with the anatomy of animals, including humans. Furthermore, the terms are not language-specific, so with little or no translation, they can be understood by all zoologists. While these terms are standardized within specific fields of biology, there are unavoidable, sometimes dramatic, differences between some disciplines. For example, differences in terminology remain a problem that, to some extent, still separates the terminology of human anatomy from that used in the study of various other zoological categories. Introduction[edit] Unique anatomical terminology is used to describe humans and other animals. The vertebrates and Craniata share a substantial heritage and common structure, so many of the same terms are used to describe location. For humans, one type of vertebrate, anatomical terms may differ from other forms of vertebrates. Standard anatomical position[edit] A jellyfish of the Chrysaora species. Combined terms[edit] Bone

Anatomical terms of motion In general, motion is classified according to the anatomical plane it occurs in. Flexion and extension are examples of angular motions, in which two axes of a joint are brought closer together or moved further apart. Rotational motion may occur at other joints, for example the shoulder, and are described as internal or external. Other terms, such as elevation and depression, refer to movement above or below the horizontal plane. Many anatomical terms derive from Latin terms with the same meaning. Classification[edit] Motions are classified after the anatomical planes they occur in, although movement is more often than not a combination of different motions occurring simultaneously in several planes. Apart from this motions can also be divided into: Linear motions (or translatory motions), which move in a line between two points. The study of movement is known as kinesiology. Abnormal motion[edit] General motion[edit] Flexion and extension[edit] Abduction and adduction[edit] Rotation[edit]

3000 Years Of Women’s Beauty Standards In A 3 Minute Video Beauty is indeed in the eye of the beholder, but our idea of beauty over the past few decades has most definitely been programmed into us. Our youth are growing up with mass amounts of marketing around them, as they watch television and participate in life, they are constantly bombarded with a picture of “what is beautiful.” It’s a shame how our children grow up striving to achieve that particular look, and how they can be made to feel “ugly” if they do not fit the accepted model of what our corporations have defined as beautiful. As a result, our youth are not addressing their feelings and emotions, always being taught to look outside of themselves instead of within themselves for the answer. “If tomorrow, women woke up and decided they really liked their bodies, just think about how many industries would go out of business.” – Unknown It’s quite ridiculous when you think about it, because the programmed idea of beauty isn’t even real. Related CE Articles: Click Here!

Updated map of the human brain hailed as a scientific tour de force | Science When the German neurologist Korbinian Brodmann first sliced and mapped the human brain more than a century ago he identified 50 distinct regions in the crinkly surface called the cerebral cortex that governs much of what makes us human. Now researchers have updated the 100-year-old map in a scientific tour de force which reveals that the human brain has at least 180 different regions that are important for language, perception, consciousness, thought, attention and sensation. The landmark achievement hands neuroscientists their most comprehensive map of the cortex so far, one that is expected to supersede Brodmann’s as the standard researchers use to talk about the various areas of the brain. Scientists at Washington University in St Louis created the map by combining highly-detailed MRI scans from 210 healthy young adults who had agreed to take part in the Human Connectome Project, a massive effort that aims to understand how neurons in the brain are connected.