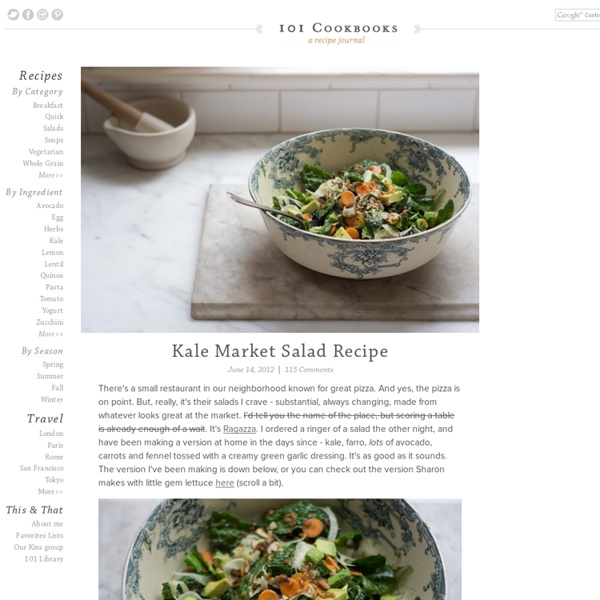 There's a small restaurant in our neighborhood known for great pizza. And yes, the pizza is on point. But, really, it's their salads I crave - substantial, always changing, made from whatever looks great at the market. I'd tell you the name of the place, but scoring a table is already enough of a wait. To prep the fennel and carrots, it's worth using a mandolin if you have one. It has been a bit wild around here and this sort of thing is nice to be able to throw together on somewhat of a whim. Thank you to everyone who stopped by QUITOKEETO yesterday. Lacinato kale is my variety of choice here. Make the dressing by using a hand blender or food processor to puree the green garlic, salt, lemon juice, olive oil, avocado, honey, and pepper until smooth. Before you're ready to serve, combine the kale with about half of the dressing in a large bowl use your hands to work the dressing into the kale, softening up the kale a bit in the process. Serves 2-4. Print Recipe Related:  I tried it, I liked it! • Salads • kale salads

black bean pumpkin soup I know this sounds like the tiniest of triumphs in a world of people who have respectable accomplishments to be proud of, but nonetheless, it brings me great pleasure to announce that I have found a pumpkin soup that meets my approval. Yes, I know, who talks about pumpkin soup in November? It seems like strictly an October affair. Pumpkins crowd the markets, and the people gather round with an evil glint in their eyes, eager to carve them up and roast their innards, mwa-ha-ha. You can barely turn your head without finding another half dozen pumpkin recipes, and oh, I know, I’ve spread my share around. Alex and I bought three smallish pumpkins to carve this year, but the weeks leading up to Halloween were chaotic and we never got to them. Nonetheless, I have cups and cups of puree, and I decided it time to find a pumpkin soup I can actually get along with. But this is about to change. Accompaniment: Elise’s brined and baked pumpkin seeds, which will be my new go-to recipe Yield: 9 cups

chopped kale salad with chickpeas, toasted almonds, sesame seeds + a honey ginger dressing — whats cooking good looking Boy, do I need a salad every day for the next few weeks. As you may have noticed, I've been away for the past couple of weeks. Shortly after the New Year, Michael and I took off and traveled half way around the world to Thailand for a friend's wedding. Thailand has been top on my list of places to go for as long as I can remember, and now I can happily cross that off the list. The moment I put my feet in the sand and was handed a freshly cracked open Thai coconut with ice cold coconut water inside, the two days of travel it took to get there melted away. Whenever I travel, especially very very long distances, there is not much choice but to eat pick at whatever is being served in-flight, so as soon as I get home I crave big bowls of homemade goodness. I landed back in NY yesterday, so I am in a bit of a jet lagged haze.

A Simple Tomato Soup Recipe Every couple of months a small group of us choose a cookbook author (or cookbook) to focus on. It's a casual affair, and people leave notes and insights related to the recipes they try. We've cooked from Moro East and The Many Little Meals of Rose Bakery, as well as The Zuni Cafe Cookbook. We've cooked along with Yotam Ottolenghi, Deborah Madison, and for the next two months, Melissa Clark. I know many of you have Melissa's books - just know you're more than welcome to join in. I tend to make a big pot of this soup. HS: A number of you are concerned about the BPA liners in a canned tomatoes. In a large pot over medium heat melt the butter. Stir in the curry powder, coriander, cumin, and chile flakes, and cook just until the spices are fragrant and toasty - stirring constantly at this point. This soup is great served simply with a dollop of cream from the top of a can of coconut milk (a little goes a long way) and a toasted wedge of good bread. Prep time: 5 min - Cook time: 25 min

the everyday superfood salad Superfoods! These things are being pimped out everywhere I go lately. I’ve been frequenting a certain home furnishings discount chain, just to see what I can pick up for our new place and you know something? They have a superfoods section in their little food aisle with the fancy oils, vinegars, salts and preserves. We went on a short little getaway to the Finger Lakes-ish area of New York State this past weekend. There are so many new things coming up for us and all of the usual big ideas. So there’s been some purchase-less trips to Ikea (not counting the cinnamon bun that I wolfed down and got all over my face while we examined cabinet options in the showroom–Mark just looked at me and laughed), some antique store hops (fuelling my enamelware love) and a visit to my new favourite place: a clearance/auction house out in the sticks. In the meantime, there’s the everyday surprises. So yeah, lots of things on the unfold. Arrange the massaged kale and broccoli on your serving plate.

Cilantro Salad Recipe I went to a lunch in Oakland a few weeks back. It was one of those special lunches that passes all too quickly - a warm April afternoon, a stretch of tables pushed together under a booming canopy of white flowers, good company, Lillet blanc, and some of my favorite cooks arriving with something to share, family-style. It was a celebration of Deborah Madison's new book, and after all these years, I was finally able to thank her for inspiring body of work in person. All in all, a pretty great afternoon. I would have been more than happy to stay right where I was, long after the plates were cleared, as I imagine dinner under the blossoming trees would be magic. The Xinjiang salad was made by Carolyn Phillips from a Chinese cookbook specializing in the Northwest (you can see the write-up on her site here). The key here is absolutely using the brightest, best cilantro you can get your hands on. HS: You're going to make far more shallot oil (and shallots) than you need here. Serves 6.

Moroccan Mint Roasted Vegetables Recipe I was on the first flight of the day from Paris to Marrakesh. A full airplane heading south-west, three hours from tarmac to tarmac. Now, I'm not sure if it's just this time of year, but when you look out the window on final approach to Aéroport Marrakech Ménara, you're smacked with pink. The boxy buildings, the desert, the soft winter sunlight filtering through the dusty landscape - it all takes it's cue from a salmon shades of earthy pink. And you're greeted with thousand subtle variations of it. I'm sure some of you are curious about why I was in Morocco. So, these shots here are just off my little digital camera, I'll scan some of the instant film shots to share soon. I suspect some of the quiet moments will be the ones that will stay with me. A couple notes about the roasted vegetables. As I mention in the main post, I used a mix of what looked good and seasonal at my local market here, but feel free to mix it up a bit. Preheat your oven to 425F / 220C. Serves 4. Print Recipe

grilled peach salad & mint pesto This one has moved to the top of my list for favorite summertime dishes. Sweet grilled peaches, spicy arugula, creamy fresh mozzarella, crunchy pine nuts, and herb-y pesto… It’s simple enough to put together for a light weeknight meal, but fancy enough to serve as a starter at your next dinner party. grilled peach salad & mint pesto Ingredients forthesalad: 2 firm, yet ripe peaches 2 teaspoons olive oil 1 teaspoon balsamic vinegar 2 cups baby arugula fresh mozzarella, sliced a few dollops of pesto sprinkle of toasted pine nuts salt & pepper mint & basil pesto: 1 packed cup of a mix of mint & basil 1/4 cup pine nuts, toasted (you could also use walnuts instead) 1/2 garlic clove, roughly chopped juice and zest from 1/2 a lemon 1/4 cup olive oil (or more) a few pinches of red pepper flakes salt & pepper Instructions Slice the peaches into 6 segments per peach. Notes A few notes about grilling peaches: They will pick up the flavors of what you previously grilled on your grill.

Vegan Recipes Vegan Recipes The recipes listed here are vegan, or easily made vegan (with a minor tweak or two). I only list them here if I've actually mentioned how to make the recipe vegan in the recipe or in the head notes of the recipe. Olive Oil Braised Spring Vegetables- April 7, 2014 Back in the late 90's Vogue Entertaining + Travel was the Australia-based magazine I splurged for any time I came across it on the news stand. Giant Lemon Fennel Beans- March 18, 2014 Baby fennel, big white beans, sliced lemon, a honey-kissed in-pan white wine sauce, all finished with a shower of chopped dill. Sake Mushrooms- February 6, 2014 Going through a stack of papers in my kitchen I found a note to myself, a recipe to try. Guacamole- January 30, 2014 To make great guacamole you have to go off-recipe. Immunity Soup- January 16, 2014 A soup built on a monster white pepper broth. Detoxifying Mint Tea- December 29, 2013 A homemade blend of detoxifying mint tea - green tasting from mint and coriander, and fennel-sweet.

Better Than Trader Joe’s Kale and Edamame Bistro Salad Print This Post This is the tale of the teenager who became besotted with Trader Joe’s prepared, packaged Kale and Edamame Bistro Salad, and the mom who was going broke buying them for her, at $4 a pop. It’s a simple story, involving a woman fully aware that of all the addictions in the world, a love of kale salad was, shall we admit, the best possible one to have. In fact, rather than calling it an addiction, the mom might better term it a good eating habit, and leave it at that. But the wallet doesn’t lie, and $12 a week in packaged kale salads was just not, uh, cutting it (pause for a polite laugh). Not to mention the plastics involved in the individual packaging, and the special trip to TJ’s, etc. So the mom, a kale lover herself and handy with a knife, set out to not only duplicate the TJ’s salad, but while she was at it, better it. Voila, my darling teenager. Ingredients Dressing Salad Instructions Quick notes Nuts: The TJ’s salad has slivered almonds in it, as well.