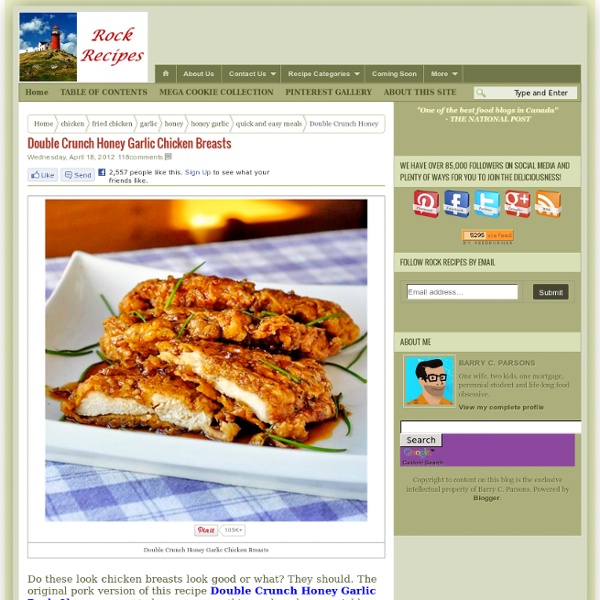 Double Crunch Honey Garlic Chicken Breasts Do these look chicken breasts look good or what? They should. The original pork version of this recipe Double Crunch Honey Garlic Pork Chops was posted one year ago this week and very quickly grew to being the most popular recipe ever on Rock Recipes with just over 117,000 views to date. It has been among the most commented upon and possibly the most raved about recipe I have ever posted too and for very good reason. It seems everyone who tried them loved them and made them over and over again. Many readers also shared that they had tried this recipe with chicken breasts as well, as we often do in my family and on the occasion of the one year anniversary of the recipe's publication, we decided to prepare the chicken version and snap a new photo for the blog. Double Crunch Honey Garlic Chicken Recipe by Barry C. With almost 2 MILLION hits, this is Rock Recipes most popular recipe ever.

Lighter Sesame Chicken Lighter Sesame Chicken satisfies my craving for Chinese take-out, without all the calories that usually come along with it. Well hello there, how was your weekend? :) Besides meeting some friends for an impromptu wild Friday night out (oy,) finally watching The Vow on Saturday afternoon (omg what a horribly sad movie, right?!)

Warm and Nutty Cinnamon Quinoa Recipe This stunning berry-studded breakfast quinoa is from Dr. John La Puma's recent release - Chef MD's Big Book of Culinary Medicine. I've written about just a handful of books this year (more to come, I promise!) Monterey Chicken My Mother's Day was perfect. It's not often I can say I have a perfect day! Ella gave me these beautiful flowers. She was so excited to surprise me. I love Gerbera daisies. She chose the bouquet because it had pink roses.Lynn and Ella took me to lunch at P.F. 100 Things to Do with a Banana How many times has someone spotted excess, overripe or just unused bananas in your kitchen and said, “uh-oh, looks like it’s time to make banana bread!” — as if the only things possible to do with a banana are eat it or turn it into bread? Well we say “no more.” With no particular offense meant to anyone’s banana bread recipe, we believe the humble banana is in fact as versatile as bacon or eggs, and we’ve got the internets to prove it. Here’s our carefully curated list of 100 Things to Do with a Banana (not including banana bread). Yes, we’ve got plenty of banana breakfasts and banana desserts, but how about some banana curry, banana soup or a banana martini?

Tuscan Garlic Chicken I would order this Tuscan Garlic Chicken every time I went to Olive Garden. It was my favorite! And then one sad day I went to order it and they didn’t have it anymore. I felt so lost. What would I order now? 100 Things to Do With Peanut Butter You most likely learned long ago that peanut butter ain’t only good for PB&J sandwiches. George Washington Carver’s greatest invention can in fact spruce up everything from drinks to desserts. Actually, we’d be hard-pressed to come up with a dish that wouldn’t be better with a little Skippy. Peanut butter chili, peanut butter broccoli, peanut butter ice cream and peanut butter cocktails — it all works. Slow Cooker Garlic & Brown Sugar Chicken I'm back! One thing my grandma truly loved was food, and she would not want me to stop sharing recipes. I may not have adopted her Southern ways of cooking, (no fat-back or collard greens for me, thank you) but I do share her love of all things food. I even taught her a thing or two...for example, she thought she hated pumpkin until my pumpkin breads and muffins :-)

8 Fabulously Flavoured Veggie Burger Recipes … Veggie burgers aren´t just for vegetarians. Even meat eaters can try them for a change! There are so many delicious veggie burger recipes that you don´t need to buy the ready-made version. Plus you can make more than you need, and freeze the rest for another time. Here are some of the tastiest veggie burger recipes I could find … Chicken Spaghetti This really is a fabulous casserole, and the only one in existence that Marlboro Man, our cowboys, and my children will eat. It’s officially called Chicken Spaghetti, but because of my addition of Cayenne Pepper, Marlboro Man took to calling it "Mexican Chicken," which isn’t its proper name at all, but what’s a woman to do? There is a lot of "stuff" in this casserole, but the way I ensure widespread acceptance and bliss by those I serve it to is to keep everything diced very small and to season it adequately. And I’ll show you how to do just that. So let’s jump into Chicken SpaghettiLand, shall we? The water’s just fine.

My Vegan Pantry One of the requests I receive often is to write a post on building a vegan pantry, providing a list of the ingredients that I use the most. I’m a bit embarrassed by how long this post has taken me to put together, but as they say, better late than never. Or is it better never than late…heh. This post is by no means exhaustive (nor do I think you need all or even most in your own pantry), but it does highlight many of my favourite foods that I have relied on for about 3 years now. Feel free to use it as inspiration for your own pantry. I also haven’t included vegetables or fruit because my favourites tend to change based on the seasons.