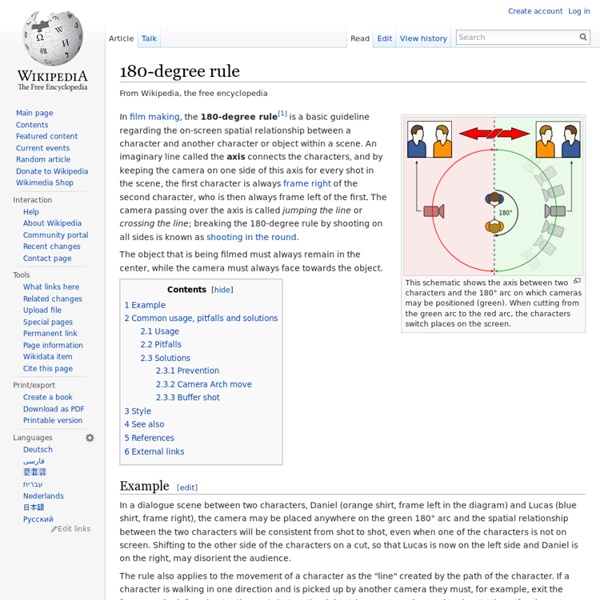 This schematic shows the axis between two characters and the 180° arc on which cameras may be positioned (green). When cutting from the green arc to the red arc, the characters switch places on the screen. In film making, the 180-degree rule[1] is a basic guideline regarding the on-screen spatial relationship between a character and another character or object within a scene. An imaginary line called the axis connects the characters, and by keeping the camera on one side of this axis for every shot in the scene, the first character is always frame right of the second character, who is then always frame left of the first. The object that is being filmed must always remain in the center, while the camera must always face towards the object. Example[edit] The rule also applies to the movement of a character as the "line" created by the path of the character. Common usage, pitfalls and solutions[edit] Usage[edit] Pitfalls[edit] Solutions[edit] Prevention[edit] Camera Arch move[edit] Style[edit] Related:  Cinema

Pixar's Motto In a world that is obsessed with preventing errors and perfection, perhaps it's ironic that despite 11 straight blockbuster movies, Pixar cofounder and President Ed Catmull describes Pixar's creative process as "going from suck to nonsuck." That's because Catmull and Pixar's directors think it's better to fix problems than to prevent errors. "My strategy has always been: be wrong as fast as we can," says Andrew Stanton, Director of Finding Nemo and WALL-E, "Which basically means, we're gonna screw up, let's just admit that. Let's not be afraid of that." We can all work this way more often. So, for instance, Pixar does not begin new movies with a script. People at Pixar describe storyboards as the "hand-drawn comic book version" of a movie, a blueprint for the characters and actions. They must persist. "Every time we show a film for the first time, it sucks," Catmull will say. What we see is not effortless genius. Pixar's culture is defined by a pursuit of excellence and quality.

Screenplay Main article: Pre-production Sample from a screenplay, showing dialogue and action descriptions A screenplay or script is a written work by screenwriters for a film, video game, or television program. These screenplays can be original works or adaptations from existing pieces of writing. In them, the movement, actions, expression, and dialogues of the characters are also narrated. A play for television is also known as a teleplay. Format and style[edit] The format consists of three aspects: The style consists of a grammar that is specific to screenplays. A prose that is manifestation-oriented, i.e. focuses largely on what is audible and what is visible on screen. Physical format[edit] American screenplays are printed single-sided on three-hole-punched paper using the standard American letter size (8.5 x 11 inch). In the United Kingdom, double-hole-punched A4 paper is normally used, which is slightly taller and narrower than US letter size. Screenplay formats[edit] Feature film[edit]

Cinematography Cinematography (from Greek: κίνημα, kinema "movements" and γράφειν, graphein "to record") is the science or art of motion picture photography by recording light or other electromagnetic radiation, either electronically by means of an image sensor, or chemically by means of a light-sensitive material such as film stock.[1] Cinematography is employed in many fields of science and business as well as its more direct uses for recreational purposes and mass communication. §Etymology[edit] The word "cinematography" was created from the Greek roots κίνημα (kinema) i.e "motion" and γραφή (graphé) "representation by means of lines" or "drawing", together meaning drawing motion. §History[edit] §Precursors[edit] Muybridge sequence of a horse galloping In the 1830s, moving images were produced on revolving drums and disks, with independent invention by Simon von Stampfer (Stroboscope) in Austria, Joseph Plateau (Phenakistoscope) in Belgium and William Horner (zoetrope) in Britain. §Black-and-white[edit]

Reel Bad Arabs Reel Bad Arabs: How Hollywood Vilifies a People is a documentary film directed by Sut Jhally and produced by Media Education Foundation in 2006. This film is an extension of the book of that name by Jack Shaheen which also analyzes how Hollywood corrupts or manipulates the image of Arabs. This documentary argues that the slander of Arabs in American filmmaking has existed since the early days of the silent cinema and is present in the biggest Hollywood blockbusters today. Jack Shaheen analyzes a long series of "demeaning" images of Arabs through his presentation of various scenes from different American movies which he has studied. He argues that this image is characterized by showing Arabs either as bandits or as a savage, nomadic race, or shows Arab women as shallow belly dancers serving evil, naïve, and greedy Arab sheiks. The film showed for the first time in Washington in 8 June 2007 and then in Los Angeles in the 20 June 2007. §Synopsis[edit] §Cast[edit] Filmmaker Info Reel Injun

Commedia all'italiana I soliti ignoti (1958), the first film in the ranked as the first of the Commedia all'italiana Commedia all'italiana (i.e. «Comedy in the Italian way») or Italian-style comedy is an Italian film genre. It is widely considered to have started with Mario Monicelli's I soliti ignoti (Big Deal on Madonna Street) in 1958 and derives its name from the title of Pietro Germi's Divorzio all'italiana (Divorce Italian Style, 1961). Rather than a specific genre, the term indicates a period in which the Italian film industry was producing mainly brilliant comedies, with some common traits like satire of manners and a prevailing middle-class setting, often characterized by a substantial background of sadness that would dilute the comic contents. What is the Commedia all'Italiana[edit] As he said in an interview with the director Mario Monicelli, the Italian comedy (Commedia all'italiana) is something very simple, which is closely tied to popular culture of Italy. Stars[edit] Directors[edit]

Visual effects In filmmaking, visual effects (abbreviated VFX) are the processes by which imagery is created and/or manipulated outside the context of a live action shot. Visual effects involve the integration of live-action footage and generated imagery to create environments which look realistic, but would be dangerous, expensive, impractical, or simply impossible to capture on film. Visual effects using computer generated imagery has recently become accessible to the independent filmmaker with the introduction of affordable and easy-to-use animation and compositing software. §Timing[edit] Visual effects are often are often integral to a movie's story and appeal. §Categories[edit] Visual effects may be divided into at least four categories: §Types[edit] VFX can be categorized into: §See also[edit] §Further reading[edit] The VES Handbook of Visual Effects: Industry Standard VFX Practices and Procedures, Jeffrey A. §External links[edit]

Cinematic techniques Basic definitions of terms[edit] Aerial shot: A shot taken from a plane, helicopter or a person on top of a building. Not necessarily a moving shot. Backlighting: The main source of light is behind the subject, silhouetting it, and directed toward the camera. Bridging shot: A shot used to cover a jump in time or place or other discontinuity. Camera angle: The angle at which the camera is pointed at the subject: Low High Tilt. Cut: The splicing of two shots together. Cross-cutting: Cutting between different sets of action that can be occurring simultaneously or at different times, (this term is used synonymously but somewhat incorrectly with parallel editing.) Continuity cuts: These are cuts that take us seamlessly and logically from one sequence or scene to another. Deep focus: A technique in which objects very near the camera as well as those far away are in focus at the same time. Dolly: A set of wheels and a platform upon which the camera can be mounted to give it mobility. Sound[edit]

Studio system The studio system is a method of film production and distribution dominated by a small number of "major" studios in Hollywood. Although the term is still used today as a reference to the systems and output of the major studios, historically the term refers to the practice of large motion picture studios between the 1920s and 1960s of (a) producing movies primarily on their own filmmaking lots with creative personnel under often long-term contract, and (b) dominating exhibition through vertical integration, i.e., the ownership or effective control of distributors and exhibition, guaranteeing additional sales of films through manipulative booking techniques. The studio system was challenged under the anti-trust laws in a 1948 Supreme Court ruling which sought to separate production from the distribution and exhibition and ended such practices, thereby hastening the end of the studio system. §Sound and the Big Five[edit] §Reign of the majors[edit] §The studio system in Europe and Asia[edit]