Kurt Vonnegut - The Shapes of Stories 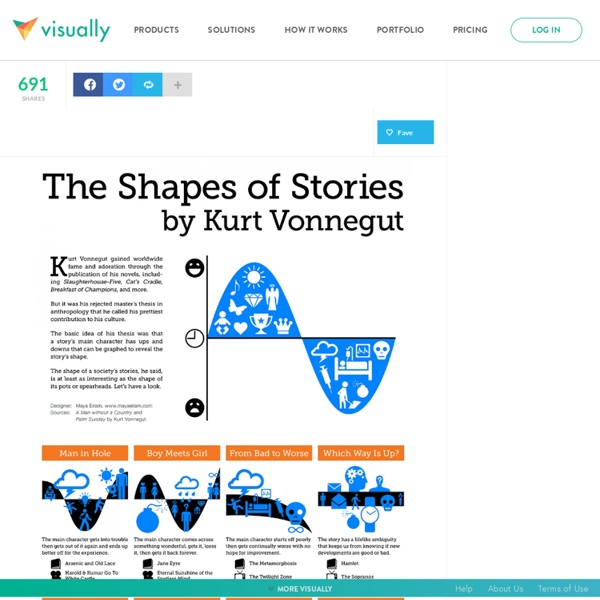 The Shapes of Stories by Kurt Vonnegut Kurt Vonnegut grained worldwide fame and adoration through the publication of his novels, including Slaughterhouse-Five, Cat's Cradle, Breakfast of Champions, and more. But is was his rejected master's thesis in anthropology that he called his prettiest contribution to his culture. The basic idea of his thesis was that a story's main character has ups and downs that can be graphed to reveal the story's shape. The shape of a society's stories, he said, is the least as interesting as the shape of its pots or spearheads. Man in Hole The main character gets into trouble then gets out of it again and ends up better off for the experience. Boy Meets Girl The main character comes across something wonderful, gets it, loses it, then gets it back forever. From Bad to Worse The main character stats off poorly then gets continually worse with no hope for improvement. Which Way Is Up? Related:  bbailey416

Is the Universe a Simulation? Photo Gray Matter By EDWARD FRENKEL IN Mikhail Bulgakov’s novel “The Master and Margarita,” the protagonist, a writer, burns a manuscript in a moment of despair, only to find out later from the Devil that “manuscripts don’t burn.” While you might appreciate this romantic sentiment, there is of course no reason to think that it is true. Nikolai Gogol apparently burned the second volume of “Dead Souls,” and it has been lost forever. But there is one area of human endeavor that comes close to exemplifying the maxim “manuscripts don’t burn.” What kinds of things are mathematical entities and theorems, that they are knowable in this way? This question has divided thinkers for centuries. Many mathematicians, when pressed, admit to being Platonists. We don’t know. This may strike you as very unlikely. Very clever. Indeed, there may be. But these computer simulations, Professor Beane and his colleagues observe, generate slight but distinctive anomalies — certain kinds of asymmetries.

Ten Tips to Indie Filmmaking : Indie Film & Documentary John Steinbeck once wrote that a lie is often more believable than the truth, and that telling the truth sometimes gets you into trouble. A well-crafted lie, he says, will make you seem more liked, more respected, and require less explanation than the truth. That is the reason I'm often tempted to lie and say that we shot our film, Cement Suitcase, on the Red, or perhaps the Alexa, or some other sexy camera. But in truth, the technology of making movies is coming down so quickly in price that it will soon be comparable to purchasing paper and a pencil. When I tell people that we actually shot the film on the Canon 7D, I often see a flinch of disdain. What I should really tell people when they ask, is that we shot on the Jeffrey Waldron. But that is just a preface. We are craftsmen, and we love the hammers and chisels of our trade. ONE: KNOW EVERYTHING It is not necessary for a director to know every single facet of filmmaking, but I believe it is truly beneficial. What does this mean?

building.pdf Dark Arts 17inShare Jump To Close We’re in a weird time for the way the future looks; somehow House of Cards can slyly introduce a floating text-message interface to their present-day political drama without so much as blinking, but most of our iconic near- and far-future worlds run on tracks laid down well before the ’90s. And it’s not just the recycling of every franchise from Star Trek to RoboCop: Avatar’s and Prometheus’ huge budgets couldn’t hide their indebtedness to the grandiose sci-fi storyboards of the ’70s. Which isn’t even to mention Oblivion. It’s an odd misalignment, considering that cyberpunk outran these operatic, alien worlds more than three decades ago. Save for a few exceptions — Neill Blomkamp’s biotech-heavy District 9, the straight-up horrifying Black Mirror — technophilic dystopias kind of fell off around the time of the last Matrix. Cyberpunk was assimilated, yes, but these days potent ideas go through a different process. He also happens to mention Otaku Gangsta.

Screenwriting and Screenplay reviews: Top 100 Loglines for the Scriptshadow Logline/Screenplay Contest It’s finally here. The Top 100 loglines for the Scriptshadow Logline/Screenplay Contest. If you see your logline below, that means you were selected from nearly 1000 loglines and have until Monday, November 30th, 11:59pm, to send me either the first ten pages of your screenplay, a one-page synopsis (a general rundown of the first, second and third acts), or both. If you want to send me the entire screenplay, that’s fine also, and I’ll only read to page 10. If you’re wondering why your logline wasn’t selected (or screaming because you know yours is better than the ones below), here’s a quick list of the possible reasons why I didn’t select you. 1) Spelling and grammar – My experience has been that if someone can’t submit a single sentence without making a spelling or grammar mistake, their script is going to be a chore to get through. All that said, I made at least one exception to every one of those points. Anyway, blah blah blah. Title: Oh Never, Spectre Leaf! Title: Got Heart?

Learning Opportunity: Private Schools with Public Purpose | The Puzzle It is a truth universally acknowledged among our client schools that strong relationships and thoughtful collaboration enhance learning. Schools from all corners of the country that serve various student types in various settings embrace this idea, and they strive to cultivate learners who work well together, who are open to and accepting of the perspectives and ideas of others, and who are committed to giving back to their respective communities. The importance of relationships transcends school models and student types, transcends location, and even transcends school type: private, public, or charter. When constituents from these various school types (that can sometimes feel, in the national dialogue, that they are at odds with one another) work together and learn from one another, all students can benefit. At CS&A, we have the privilege of working with over 1,500 private, independent, charter, and international schools across the country and worldwide.

The Sugar Daddy Scholarship Elliot is 45, gainfully employed, lonesome, and looking for a pretty young college girl to spend money on. Ideally he would serve as her benefactor and mentor; she would express gratitude through sexual favors. At the very least she’d accompany him to dinner on a Saturday night and, if she understood the arrangement, give him a peek of those lace knickers he bought her. If all went well between the sheets, he’d even offer to pay her college tuition. Elliot is fictional, but there are more than two million men like him registered as “sugar daddies” on the dating website SeekingArrangement, many of whom are seeking out cash-strapped college students. "Women hold 60 percent of bachelor degrees and drop out at a lower rate because they are less discouraged by financial burden compared to men," according to promotional material from SeekingArrangement. But Wade is trying to upend what he sees as the myths of sugar daddydom.