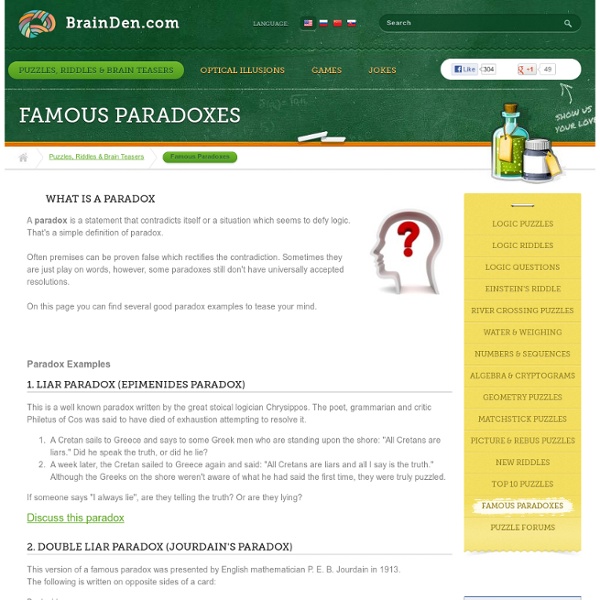 What is a Paradox A paradox is a statement that contradicts itself or a situation which seems to defy logic. That's a simple definition of paradox. Often premises can be proven false which rectifies the contradiction. Sometimes they are just play on words, however, some paradoxes still don't have universally accepted resolutions. On this page you can find several good paradox examples to tease your mind. Paradox Examples 1. This is a well known paradox written by the great stoical logician Chrysippos. A Cretan sails to Greece and says to some Greek men who are standing upon the shore: "All Cretans are liars." If someone says "I always lie", are they telling the truth? 2. This version of a famous paradox was presented by English mathematician P. Back side: THE SENTENCE ON THE OTHER SIDE OF THIS CARD IS TRUE. Face side: THE SENTENCE ON THE OTHER SIDE OF THIS CARD IS FALSE. 3. Analogue paradox to the 'liar paradox' formulated by English logician, philosopher and mathematician Bertrand Russell. Related:  Critical Thinking

Logic Puzzles Bulbs This is one of my favorite free printable logic puzzles with a real life solution. There are three switches downstairs. Each corresponds to one of the three light bulbs in the attic. You can turn the switches on and off and leave them in any position. How would you identify which switch corresponds to which light bulb, if you are only allowed one trip upstairs? Keep the first bulb switched on for a few minutes. A Ping-Pong Ball in a Hole Your last good ping-pong ball fell down into a narrow metal pipe imbedded in concrete one foot deep. All the tools are random things that are not going to help you. A Man in an Elevator A man who lives on the tenth floor takes the elevator down to the first floor every morning and goes to work. The man is of short stature. The Ball How can you throw a ball as hard as you can and have it come back to you, even if it doesn't bounce off anything? Throw the ball straight up in the air. The Magnet Virile Microbes The dish will be full at 12:44. Try this.

Lateral Thinking Problems - Semantics Lateral thinking problems that require you to pay close attention to the exact wording of the problem. 1. A woman gave natural birth to two sons who were born on the same hour of the same day of the same month of the same year. But they were not twins and she had no access to a time machine. Solution: They were two of a set of triplets (or quadruplets, etc.) 2. Solution: The water in the river only came up to the man's chest. 3. Hint: The truck driver was not in reverse, nor was he in any particular emergency. Solution: The truck driver was walking. 4. Hint: This really could happen, and probably does in some form or other. Solution: The man is a philanthropist who bought great quantities of rice to sell to poor people at prices they could afford. 5. Solution: Because he would earn three times as much money!

LEAKED NORTH KOREAN DOCUMENTARY ‘EXPOSES WESTERN PROPAGANDA’ (AND IT’S SCARY HOW TRUE IT IS) Sabine is a YouTube user who, during a visit to family living in South Korea in April of this year, was given a DVD by a man and a woman claiming to be North Korean “defectors”, and was asked to translate the film so it could be posted on the internet and reach a wider audience. What the DVD turned out to be was something much more than Sabine, or anyone else, probably would’ve imagined, and something that certainly has found a widespread audience on the internet over the last month or so – it was a film called “PROPAGANDA”, a documentary about capitalism, imperialism, mass manipulation of western culture for the purpose of commodification, and how it permeates every aspect of the lives of blissfully ignorant, borderline zombie masses. And jesus, is it on the fucking money. From the video’s description - North Korea in the 1980s The movie opens: “This is a film about psychological warfare. And in the real world, in case you haven’t realized, everything is propaganda. Table of Contents:

Critical Thinking On The Web Top Ten Argument Mapping Tutorials. Six online tutorials in argument mapping, a core requirement for advanced critical thinking.The Skeptic's Dictionary - over 400 definitions and essays. What is critical thinking? Nobody said it better than Francis Bacon, back in 1605: For myself, I found that I was fitted for nothing so well as for the study of Truth; as having a mind nimble and versatile enough to catch the resemblances of things … and at the same time steady enough to fix and distinguish their subtler differences; as being gifted by nature with desire to seek, patience to doubt, fondness to meditate, slowness to assert, readiness to consider, carefulness to dispose and set in order; and as being a man that neither affects what is new nor admires what is old, and that hates every kind of imposture. A shorter version is the art of being right. More definitions... Program for Critical Thinking Program for better decision making Our umbrella site. Latest additions 6 Dec The Idea Emporium Zany.

thinking tools resources Weak versus Strong Critical Thinking Critical thinking involves basic intellectual skills, but these skills can be used to serve two incompatible ends: self-centeredness or fair-mindedness. As we develop the basic intellectual skills that critical thinking entails, we can begin to use those skills in a selfish or in a fair-minded way. In other words, we can develop in such a way that we learn to see mistakes in our own thinking, as well as the thinking of others. Or we can merely develop some proficiency in making our opponent's thinking look bad. Typically, people see mistakes in other's thinking without being able to credit the strengths in those opposing views. We call these thinkers weak-sense critical thinkers. Another traditional name for the weak-sense thinker is found in the word sophist. Sophistic thinkers succeed only if they do not come up against what we call strong-sense critical thinkers. Perhaps even more important, strong-sense critical thinkers strive to be fair-minded.

critical thinking model and mods How PowerPoint is killing critical thought | Andrew Smith I still remember the best lecture I ever attended. It was part of a joint series offered by the English and philosophy departments in my first term at university and, given that the subject was Sartre’s Being and Nothingness, should have been the dullest event in Christendom that night. But it wasn’t. The lecturer, Thomas Baldwin, had a deceptively simple style: he would write a proposition on the blackboard facing us and gaze at it for a moment, like a medium beckoning a spirit. Then he would turn and smile, and start to explain. Baldwin paced the room – but slowly. Baldwin’s talk came to mind recently when I listened to a debate, on Radio 4’s Today show, about lecturing standards at British universities. “Did the lecturer use PowerPoint?” “Hm. PowerPoint is so ubiquitous that Lotte hadn’t made the connection. Let’s stay with teaching a moment. So, a few bored students: how serious is this? And bored is the least of it.