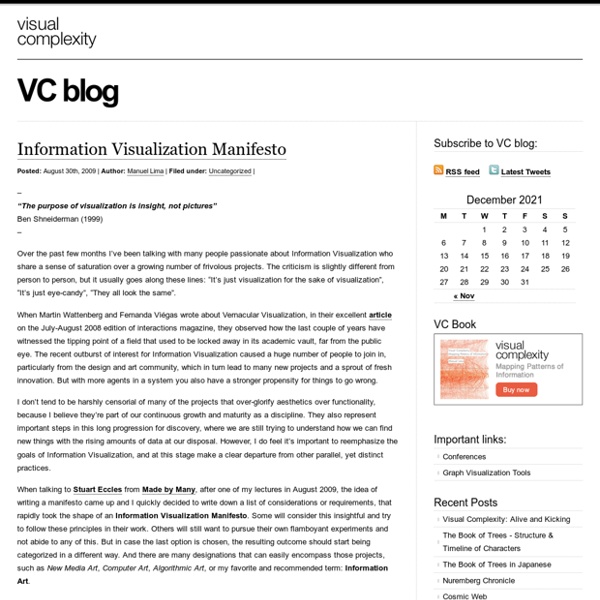 Posted: August 30th, 2009 | Author: Manuel Lima | Filed under: Uncategorized | – “The purpose of visualization is insight, not pictures” Ben Shneiderman (1999) – Over the past few months I’ve been talking with many people passionate about Information Visualization who share a sense of saturation over a growing number of frivolous projects. The criticism is slightly different from person to person, but it usually goes along these lines: “It’s just visualization for the sake of visualization”, “It’s just eye-candy”, “They all look the same”. When Martin Wattenberg and Fernanda Viégas wrote about Vernacular Visualization, in their excellent article on the July-August 2008 edition of interactions magazine, they observed how the last couple of years have witnessed the tipping point of a field that used to be locked away in its academic vault, far from the public eye. Even though a clear divide is necessary, it doesn’t mean that Information Visualization and Information Art cannot coexist.

50 Viral Images Part Two My original 50 viral images (and how they spread) post turned out to be extremely successful and was read quite a few times to say the least. I was surprised so many people were interested as the images in there had already been passed around social media to death. With that said, I failed to consider most people don’t spend nearly as much time on the web as I do. Edward Tufte Edward Tufte is a statistician and artist, and Professor Emeritus of Political Science, Statistics, and Computer Science at Yale University. He wrote, designed, and self-published 4 classic books on data visualization. The New York Times described ET as the "Leonardo da Vinci of data," and Business Week as the "Galileo of graphics." Language Comparison It's important when choosing a programming language to choose the right language for the job. While there are many factors involved, one of the most important is certainly the fit of the tool to the project at hand. Tcl and Tk aren't the perfect tool for everything, but they do work well for a surprisingly large number of projects. Here are some things to consider when trying to decide if Tcl and Tk might be a good fit as one of the languages for your next project. Dynamic Languages vs. System Programming Languages

Simon Staffans: What's next for crossmedia? March 6, 2014 Brand storytelling, deep knowledge of audiences and real-life interaction will all be key moving forwards By Simon Staffans Photo: PAN Studio’s Hello Project brought everyday objects to life in Bristol last year. Entertainment IRL! A couple of weeks ago in a post here on MIPBlog I talked with four people who were each looking forward to 2014 for different reasons; everything from how gaming will come to influence television, to a new rise in ad-funded crossmedia and transmedia content. 50 Viral Images (and how they spread) Viral videos are ubiquitous – they have spread into both mainstream pop culture and corporate America. Everyone talks about developing viral videos, and there are plenty of techniques you can use to give your video the best chance of success. But, something not talked about as frequently are viral images. Viral images predate viral videos, and have been around since the AOL and Prodigy days when there wasn’t enough bandwidth available for the everyday user to access video.

Mathematics Applications - www.mathvisuals.com Your current web browser must be updated to version 7 of Internet Explorer (IE7) to take advantage of all of template's capabilities. Why should I upgrade to Internet Explorer 7? Microsoft has redesigned Internet Explorer from the ground up, with better security, new capabilities, and a whole new interface. Many changes resulted from the feedback of millions of users who tested prerelease versions of the new browser. A Collection of Printable Sketch Templates and Sketch Books for Wireframing At the beginning of a web (or application) development project I always create the sketches first. While sketching can be done on a blank paper, it’s much better to use a sketch template. For me that is the best and most productive way to work on and improve my ideas before application development begins (and things get more complicated :-)). This way I won’t pay too much attention to some details that should be taken care of later, but stay focused on general layout and functionality. Below you will find more than 20 resources that you can use in sketching phase of application development. If you have some additional resources to share, please leave a comment so I can add them to the list.

15 examples Data Visualization is a method of presenting information in a graphical form. Good data visualization should appear as if it is a work of art. This intrigues the viewer and draws them in so that they can further investigate the data and info that the graphic represents. In this post there are 15 stunning examples of Data Visualization that are true works of art. Click on the title or image for a larger view of each visualization.

Amazing Mathematical Object Factory AMOF, the Amazing Mathematical Object Factory, shown on the left, produces lists of mathematical objects in response to customer orders. Today you are a customer and you must tell AMOF what you want produced. This factory is totally non-polluting and the objects produced are absolutely free! (There is a vicious rumour however, that the workers are underpaid and overworked.) Pictogram rock posters This is my most ambitious, and maybe also the best, personal work I’ve done so far. I decided to pick a few bands and artists from the rock genre and make pictogram posters for them. Instead of just putting one single pictogram in each poster, like in my previous ‘Pictogram music posters’, I made as many as I could possibly come up with for each artist, and jammed them into one single poster. There is a total of 234 song pictograms in these posters. I started this project Jan 15th 2012, so I’ve been working on this for about five months. I am really happy and proud to be able to present them now.

The Made Shop TWENTY TEN // Linear Calendar Fullscreen TWENTY TEN // Linear Month Calendar Poster. Web 2.0 Tools for Math Educators By Laura Turner This is a continuing series on Web2.0 and other web-based tools for educators. This information is specific to math educators, but there is some crossover into science. Math educators will find a large number of useable interactive companion web sites for the teaching of math concepts and skills. 3Dvinci 3D design is a great motivational and instructional tool. It exercises both left-brain and right-brain skills, and appeals to students of all abilities. David Byrne’s Hand-Drawn Pencil Diagrams of the Human Condition by Maria Popova “Science’s job is to map our ignorance.” David Byrne may have authored both one of last year’s best albums and best music books, but he is also one of the sharpest thinkers of our time and a kind of visual philosopher. About a decade ago, Byrne began making “mental maps of imaginary territory” in a little notebook based on self-directed instructions to draw anything from a Venn diagram about relationships to an evolutionary tree of pleasure — part Wendy MacNaughton, part Julian Hibbard, yet wholly unlike anything else. In 2006, Byrne released Arboretum (UK; public library), a collection of these thoughtful, funny, cynical, poetic, and altogether brilliant pencil sketches — some very abstract, some very concrete — drawn in the style of evolutionary diagrams and mapping everything from the roots of philosophy to the tangles of romantic destiny to the ecosystem of the performing arts. Möbius Structure of Relationships