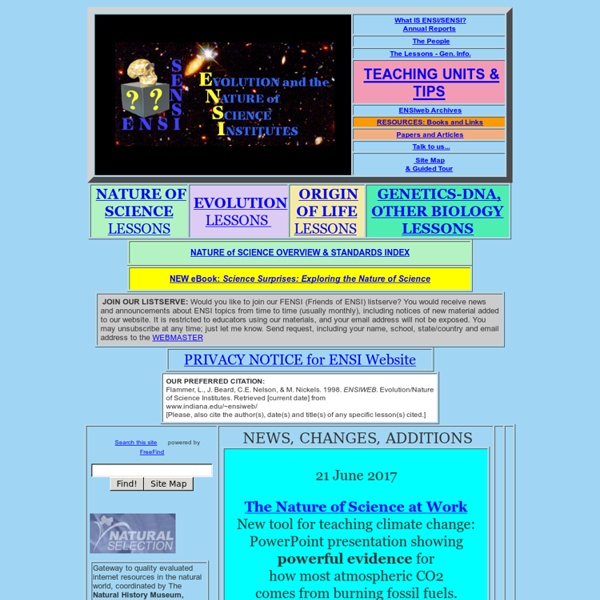 19 February 2017 ATTENTION, FILMMAKERS! A chance to make a film about evolution and win a prize! Scientists and science educators of all stripes -- students, postdocs, faculty, and full- or part-time science communicators -- are invited to enter the Seventh Annual Evolution Video Competition, sponsored by the Duke Initiative for Science & Society, the Howard Hughes Medical Institute, the Society for the Study of Evolution, and the BEACON Center for the Study of Evolution in Action. To enter, please submit a video that explains a fun fact, key concept, compelling question, or exciting area of evolution research in three minutes or less. Entries may be related or unrelated to your own research, and should be suitable for use in a classroom. The finalists will be screened at the Evolution 2017 meeting in Portland, Oregon. For information about the contest, visit: Related:  Natural Selection and Adaptation • UNIT 2 - Biological Unity & Diversity

Caught in the act Most animals, plants and other organisms possess a broad range of traits, or features. For instance, within a species, some individuals might be bigger. Some might be faster or better camouflaged. Others might have genes that allow them to resist disease, better digest some foods or even learn new tasks more quickly. Many traits help an organism survive and reproduce. Once-useful traits, however, can become worthless. Until recently, scientists thought such evolution required hundreds of years, if not thousands. These major transformations to our planet still happen. People also change Earth’s air, water and land. Such environmental changes pressure species to adapt ever faster. Shape-shifters When it comes to survival, animals have two immediate concerns. Van Rijssel is an evolutionary ecologist at Leiden University in the Netherlands. One of Jacco van Rijssel’s study subjects, Haplochromis (Yssichromis) pyrrhocephalus is now the most common zooplankton-eating cichlid in Lake Victoria.

Evolution in Paradise We are pleased to bring you three exciting lessons inspired by the birds-of-paradise! These lessons explore the topics of science process, natural and sexual selection, behavior and heritability through hands-on activities and lively discussions… all with the help of the Birds-of Paradise Project videos. This free download is perfect for middle and high school classrooms. The Adaptation Assessment Probe I'm taking a MOOC on evolution that's designed for educators [Evolution: A Course for Educators]. One of the things that was covered in the first lecture was a test on "adpatation" taken from a book called "Uncovering Student Ideas in Science, Volume 4: 25 New Formative Assessment Probes. The book is published by the National Science Teachers Association (NSTA). Let's take the test ... Adaptation Three friends were arguing about what would happen if a population of rabbits from a warm, southern climate were moved to a cold, northern climate.1 This is what they said:Bernie: "I think all of the rabbits will try to adapt to the change." I agree with Bernie. Let's see how I did. Oops! The best answer is Phoebe's: "I think few or none of the rabbits will try to adapt to the change." I didn't read the question carefully. We turned our clocks back one hour last weekend and I'm still adapting adjusting to the change. 1.

More Minds-on Activities for Teaching Biology The resources listed below include: minds-on, hands-on activities and minds-on analysis and discussion activities for teaching biology to high school and middle school students and students in non-major college biology coursesoverviews of important biological topicsgames for learning and review. Many of these activities are explicitly aligned with the Next Generation Science Standards, as indicated by (NGSS) in the descriptions below and as described in Summary Tables and in the Teacher Notes for individual activities. These activities foster student understanding of Disciplinary Core Ideas, engage students in Scientific Practices, provide the opportunity to discuss Crosscutting Concepts, and prepare students to meet the Performance Expectations of the Next Generation Science Standards. We encourage you to subscribe to our listserv to receive notices when we post new activities or significantly improved versions of current activities. Intro and Biological Molecules Is Yeast Alive?

BetterLesson - Adaptation and Evolution of Populations: The Case of the Peppered Moth In this section of lesson students elaborate on what they have learned through the Peppered Moth simulation by reading a passage from Readworks. The passage, titled Naturally Selected to Survive, can be found for free by going onto that site, and searching for the title. The lexile level is 1090L, and there are a number of online resources that can be used to modify printed material to different reading levels. (Google app tldr (too long didn't read), Rewordify) The passage discusses in detail the environmental changes caused in England by the Industrial Revolution, and changes to the moth population as observed by scientists over the next 100 years. In having your students read this article, consider their academic language level which is different than their social language level. Once students have read the passage, they answer a series of Text Dependent questions that assesses their comprehension of text.

Scientists Watch As Wasps Diverge To Become Separate Species We often think of evolution as something which occurs slowly over millions of years, only being recorded in the fossils that are left behind. But evolution is gradual, with species constantly changing in response to a host of different pressures, from alterations in their environment to changes in other species they reply on. This last point, of species evolving and splitting in response to other species evolving and splitting, is a central concept in biodiversity, but is also a difficult one to prove. A new study has, however, apparently done just this. The friut fly Rhagoletis pomonella is diverging into two seperate species, one which lives on apples and another on hawthorn fruit. “Our study addresses one of the central questions in biology: How do new forms of life originate?” The original species of fruit fly in question, Rhagoletis pomonella, is native to the U.S. and normally lays its eggs on the fruit of the North American hawthorn.

BetterLesson - Natural Selection - Survival of the Fittest In this section of lesson students read an article on Natural Selection from cK-12. 1. Inherited vs Acquired Traits 2. To check for understanding, students answer the following questions at end of video: What's the difference between an acquired and inherited trait? In addition to reading, I show students Evolution in 1 Minute video that does a good job at visually summarizing the process of natural selection. Link It's important to point out to student that genetic variation, along with environment conditions, produces the conditions for natural selection. In addition, it's crucial to communicate the fact that natural selection is not an active process, meaning nature is not intentionally selecting one set of individuals over others.

Rare Dinosaur-Era Bird Wings Found Trapped in Amber Two tiny wings entombed in amber reveal that plumage (the layering, patterning, coloring, and arrangement of feathers) seen in birds today already existed in at least some of their predecessors nearly a hundred million years ago. A study of the mummified wings, published in the June 28 issue of Nature Communications and funded in part by the National Geographic Society's Expeditions Council, indicated they most likely belonged to enantiornithes , a group of avian dinosaurs that became extinct at the end of the Cretaceous period. (Read more about the evolution from dinosaurs to modern birds.) 'Mind-Blowingly Cool' While the fact that many, if not nearly all, dinosaurs were feathered has been generally accepted since the 1990s, our knowledge of prehistoric plumage until now has come from feather imprints in carbonized compression fossils and individual feathers fossilized in amber. (See dinosaurs in their feathered glory.) Familiar Feathers A Bountiful Fossil Source in a Troubled Area

The Perfect Beak NGSS To begin the lesson, have students complete the anticipation guide about natural selection, in order to gauge the students’ prior knowledge. Review the guide together as a class, making note of misconceptions that students hold; you will want to tweak this lesson in order to address the specific needs of your students. Let students know that we will be exploring these concepts in a few simulation activities. Ask students if we all have the same color hair? Do we all have attached earlobes? Discuss with students whether the trait to roll our tongue or the trait for our attached or detached earlobes affects our survival. Photo taken from Preparation for Activity Part 1: Activity Part 1: Introduction & Preparation: Tell students that they will participate in a simulation that will help answer the question: How might a genetic trait affect an organism’s chance of survival? Activity & Recording Data: Interpreting & Analyzing Data:

Genes and Geography Photo Credit: NASA Our early human ancestors began migrating across the globe tens of thousands of years ago. Some left behind archaeological evidence of their travels. But as you'll hear in this Science Update, another record of where we come from and where we've been might be found right in our DNA. Transcript Genes and geography. People around the world might look different from one another, but inside, we're pretty similar—and that's true even of our genes. Noah Rosenberg is a research associate at the University of Southern California. Rosenberg: One thing we found was that the amount of variation across populations was smaller than we had originally expected and smaller than had been found previously. Nevertheless, those sites could be used to predict that person's ancestry solely based on their DNA. Rosenberg: This is helpful towards trying to figure out the relationships between different populations and the patterns of human migration. Making Sense of the Research