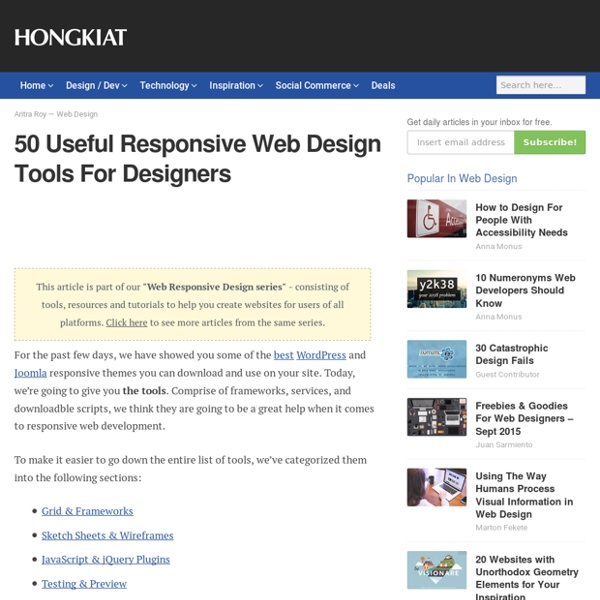 For the past few days, we have showed you some of the best WordPress and Joomla responsive themes you can download and use on your site. Today, we’re going to give you the tools. Comprise of frameworks, services, and downloadble scripts, we think they are going to be a great help when it comes to responsive web development. To make it easier to go down the entire list of tools, we’ve categorized them into the following sections: Grid & Frameworks [Back to top] Columnal Columnal is a Pulp+Pixels project, which has been borrowed from cssgrid.net while some code inspirations has been taken from 960.gs. Skeleton Skeleton is a simple and powerful CSS framework, which is mainly liked by developers and designers because of its simplicity and efficiency. LessFramework 4 Less Framework is more or less a framework, in the name of its creator. Semantic Grid System Semantic Grid System is used to design responsive grid layouts. Golden Grid System 320 and Up Inuit.css Gridless 1140 CSS Grid 1KBCSSGrid Bootstrap

» CSS Media Query for Mobile is Fool’s Gold Cloud Four Blog Read the follow up article written August 21, 2013 Ethan Marcotte’s article Responsive Web Design has caught the imagination of web developers. Several subsequent articles have touted the CSS media query feature as a way to build mobile-optimized web sites. Even I’m guilty of contributing to this meme with my article on CSS orientation. The top 25 responsive web design tools Over the past few years we've seen an explosion of web-enabled devices with varying resolutions, capabilities, form factors, pixel densities, interaction methods and more. This onslaught of connected devices is just the beginning, and we're bound to see people accessing the web from a greater number of devices in the coming years. It's futile to create a dedicated web experience for every single device class out there, and the need to create a smart, flexible, adaptable web experiences is becoming more apparent every day. Responsive/adaptive/multi-device web design (whatever you want to call it) is here to stay. Just because responsive design is becoming necessary doesn't mean it's easy. We're tasked with creating experiences that are simultaneously aware and agnostic of device context.

A better Photoshop grid for responsive web design Posted on 20 January 2012 • 90 comments In making the move to responsive web design, one of the potential hurdles is the rather awkward maths for calculating the percentage-based widths necessary for fluid layouts. If, for example, you’re designing with a 960px grid in Photoshop and you have six columns, each 140px wide, you divide 140 by 960 to get your percentage-based width: 14.583333%. Now, I don’t know about you, but numbers like that look a little scary. It doesn’t matter that there are great calculation tools built into TextMate to do the maths for you; the point is that the final figure looks like an arbitrary number with no immediate relation to either the container’s pixel width (960) or the element’s pixel width (140).

12 Essential Responsive Design Tools Translating client requirements to a full fledged, live website is no easy task. At the best of times, it requires multiple rounds of discussions between clients, designers, and developers, resulting in multiple iterations of the design, and the website itself. Throw in the whole responsive concept – having your design adapt to all kinds of mobile devices – and it can get a bit much to handle.

Using Media Queries in the Real World Warning This article was written over six months ago, and may contain outdated information. Recently I’ve been working on the new website for my employers, Poke London, which launched last week. One of the things of which I’m proudest is the use of media queries to create a site which is sympathetic to small-screen devices. I learned a lot from developing with media queries, not least of which was the limit of what’s possible with them, so I thought it would be useful to present some of the key lessons learned in this post. By the way, throughout this post I will refer to the ‘mobile version/site/theme’; I’m aware that’s a loaded term as the site won’t work on many mobile devices, but I’m using it purely as a convenient shorthand for ‘handheld device that supports media queries’. Basic first, enhanced second

HTML element reference - HTML (HyperText Markup Language) This page lists all the HTML elements. They are grouped by function to help you find what you need to achieve what you have in mind. Although this guide is written for those who are new or newer to coding, we intend it to be a useful reference for anyone. HTML5 - Web developer guide HTML5 is the latest evolution of the standard that defines HTML. The term represents two different concepts: It is a new version of the language HTML, with new elements, attributes, and behaviors, and a larger set of technologies that allows more diverse and powerful Web sites and applications.

Responsive Tables Demo A quick and dirty look at some techniques for designing responsive table layouts. This was put together in haste (and with the aid of Twitter Bootstrap) for What Do You Know Brisbane hosted by Web Directions. I work for a really great little web design agency in Brisbane, and you should say hello. The Unseen Column This technique, first described by Stuart Curry (@irishstu) involves simply hiding less important columns on smaller screen sizes. Example Responsive Data Table Roundup There has been a bunch of takes on responsive data tables since I first published about it. The idea of the original was to abandon the grid layout of the table and make each cell its own line. Each of those lines is labeled with a pseudo element. This creates a much taller table, requiring more vertical scrolling, but does not require horizontal scrolling. It's easier to browse the data without losing context of what's what. The downside is that you might lose the context of data comparison, since you no longer see see cells of data right next to other cells of that type.

Convert a Menu to a Dropdown for Small Screens The Five Simple Steps website has a responsive design with a neat feature. When the browser window is narrow, the menu in the upper right converts from a regular row of links into a dropdown menu. When you're on a small screen (iPhone shown here) and click the dropdown, you get an interface to select an option where each option is nice and big and easy to choose. That sure makes it easier to pick a place to go than a tiny link. Yeah, it's two taps instead of one, but that's arguable since you'd probably have to zoom in to tap the right link otherwise. The HTML 5 Best Free Tools To Lock Or Password-Protect Apps On Android The security of a smartphone is something that should be taken very seriously. Android OS does allow users to add a passcode lock to the lock screen, but many users find it very inconvenient and would rather risk their data getting into the wrong hands than enter the PIN or pattern lock every time. Majority of us use email and other messaging apps on our mobile devices, which contain sensitive data that we wouldn’t want others to access.

A Comparison of Five Free MOOC Platforms for Educators By the end of 2013, most top universities had started to offer some sort of MOOC (massive open online course). Now, we are starting to see the MOOC product move into both the corporate and the private realm. Companies like Google and Tenaris are using MOOCs for training their employees, MongoDB is educating developers through the MOOC medium and thousands of private instructors are teaching classes on sites like Udemy.