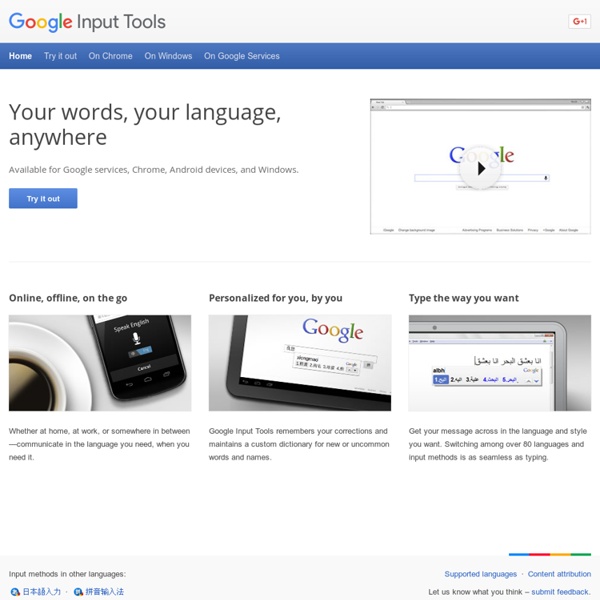 Book Recommendations and Reviews We here at the good ship Book Riot are looking for a few new contributors. Sound cool? Here’s how to know if this might be a good fit: If you like to write about books almost as much as you love books, then we’re looking for you. Japanese Phrases and Common Sentences Japanese Phrases *1 This may be a kind of literary/writing expression… and it’s seldom used in conversation. But never is unnatural. *2 Arigato and Arigato gozaimasu. There’s no big difference between them, “Arigato gozaimasu” is more polite. *3 (Anata ga inakute) Samishi katta desu : Abbreviated Anata ga inakute. *4 Usually we just say “Excuse me/ Sumimasen”, and “Can you help me” is included in this “Sumimasen”. *5 ...san is a very normal way.

Google Wave As we announced in August 2010, we are not continuing active development of Google Wave as a stand-alone product. Google Wave will be shut down in April 2012. This page details the implication of the turn down process for Google Wave. Stage 1: Google Wave is read-only -- January 31, 2012 Google URL Shortener Posted by Michael Hermanto, Software Engineer, Firebase We launched the Google URL Shortener back in 2009 as a way to help people more easily share links and measure traffic online. Since then, many popular URL shortening services have emerged and the ways people find content on the Internet have also changed dramatically, from primarily desktop webpages to apps, mobile devices, home assistants, and more. To refocus our efforts, we're turning down support for goo.gl over the coming weeks and replacing it with Firebase Dynamic Links (FDL). FDLs are smart URLs that allow you to send existing and potential users to any location within an iOS, Android or web app. We're excited to grow and improve the product going forward.

5 Ways To Develop a Company Culture for Remote Teams The Digital Careers Series is supported by Elance, the world’s leading site for online work. Check out Startup Cloud for tips on how to build a remote team. Developing a company culture can be a challenge for any business, but especially for ones that employ remote workers. However, it's crucial for long-term success to have a strong set of values and principles to give your company a unique character that your staff can believe in. Despite the difficulty of distance, it is possible to grow a company culture when your staff are dotted around the world. Inbound Marketing for #Authors I've been applying for jobs recently and as most of my marketing knowledge comes from experience rather than an academic degree, I've had to do some research on industry jargon. One such topic is Inbound Marketing. It is what I do for clients, yet I didn't know the term. I found the above graphic to be quite useful in my interviews. When I first saw it, I automatically thought of authors.

Learn Japanese Easy! - Lesson 2: Word Order & Simple Vocab Lesson 2: Word Order & Simple Vocab.....Word Order:In English, word order is Subject-Verb-Object,But in Japanese, it's Subject-Object-Verb.Take this for example...The dog will eat the cat - Inu wa neko o tabemasu...Inu (Subject)waNeko (Object)oTabemasu (Verb)..inu - dogneko - cattabemasu - will eat..wa is used to mark the subject. In every sentence, the particle wa should come directly after the subject.same goes with o. O is the object marker and should always come right after the object....Easy right?Let's try one a little bit different...The Sky is Blue - Sora wa aoi desu.Not much of an object, but to say something is, use the same structer.Sora (Subject)wa (Subject Marker)aoi (Adjective)desu (Verb)..*Because there's no object, the particle o is not needed...Sora - Skywa - Subj.

HOW TO: Manage Your Online Reputation Using SEO The Future of Search Series is supported by SES San Francisco Conference & Expo, the leading search, social and display conference. From August 15-19, get five days of education, inspiration and conversations with marketing experts across the digital space. Save 20% with the code MASH20. It's a fair bet that your boss, dates and anyone you give your business card to will type your name into a search engine. If something negative appears in the results, your online reputation can quickly damage your offline reputation — and affect your life. Of the almost 80% of U.S. hiring managers who had searched for candidates online, 70% of them said they had rejected a candidate based on what they found in his or her search results, according to a 2009 study commissioned by Microsoft.

Why Puppies are sad, and always will be  Let me state from the outset that I have zero interest in awards. While they are an honor when fairly awarded—and it would be fun to have that merit badge in my collection—the reality is that in the big game, Hugos, Nebulae and other awards really mean nothing to the life of a working writer. Aside from having an editor decide to include your winning story in an awards anthology, the economic impact is pretty much zero. As Jerry Pournelle once commented, “Money will see you through times of no awards better than awards will see you through times of no money.” That said, it would have been easy for me to blissfully ignore the rabid puppy hijacking of the Hugo awards.