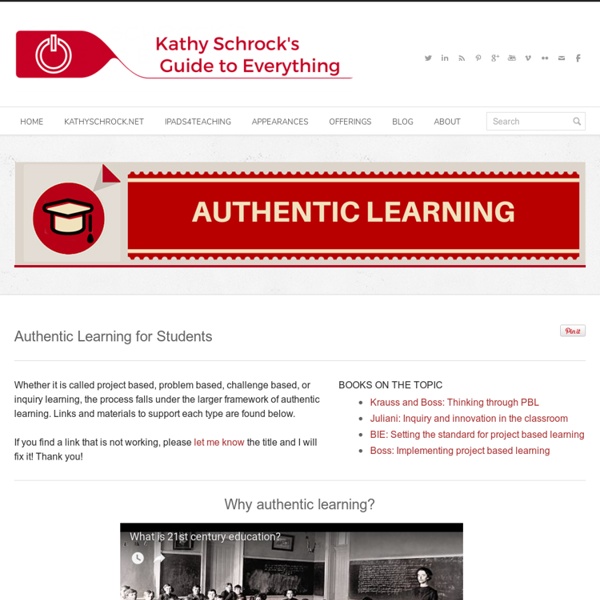 Helping Shy Students All teachers have had shy students in their classroom. These children are the ones who keep to themselves and quietly complete their work, often hiding from the attention of the teacher or their classmates. However, some of these children are not just shy or quiet but may have social anxiety disorder.

Anderson and Krathwohl - Bloom's Taxonomy Revised - The Second Principle Understanding the New Version of Bloom’s Taxonomy ©Leslie Owen Wilson (2016, 2013, 2005, 2001) Contact Leslie A succinct discussion of the revisions to Bloom’s classic cognitive taxonomy by Anderson and Krathwohl and how to use them effectively Background: Johns Hopkins University: New Horizons for Learning Welcome to New Horizons for Learning - a leading web resource for identifying and communicating successful strategies for educational practice. The Johns Hopkins School of Education does not vet or endorse any information contained on the New Horizons website. Information posted on New Horizons prior to January 1, 2014 can be repurposed as long as the repurposing party provides attribution to the original author of the material being used. Information posted on New Horizons after January 1, 2014 is considered open access information and can be repurposed without attribution to the original author.

Why did the Templars mark this mysterious spot on the map? - BBC Reel Delve into the myths and legends that surround the mysterious Knights Templar. The Templars' mystical 'place of power'The hermitage of San Bartolomé was built by the Templars in a very specific spot.Now Playing A Templar town's underground twinUnder the hill town of Osimo lies a network of tunnels and chambers mysteriously connecting the city's palaces.Watch now HistoryThe secret 'Vatican' of the TemplarsSome of the most powerful members of the Knights Templar were buried at The Church of Santa Maria do Olival.Watch now HistorySintra's mysterious 'inverted tower'BEST OF 2019: Quinta da Regaleira's 'inverted tower' celebrates Portugal's Templar past.Watch now

Differentiating Instruction Within the four ways for differentiating instruction there are embedded several other learning strategies which are used in conjunction with each other. The Strategies: Readiness / Ability Developing Quality in Mathematics Education Complying with EU data privacy laws: The DQME3 Project Personal Data Protection Policy From May 25th, 2018 new EU laws have been in force to protect personal data privacy. These laws require us to provide a Data Privacy Policy for our Project, especially with regard to data collection for our newly restored DQME Webpage. It also requires us to ask you to confirm that you have read and agree to our Personal Data Protection Policy details below. (1) The DQME3 Project is, and always has been, a philanthropic, educational, non-commercial and non-profit association and will never pass on private/personal data to any other person.

Cognitive Constructivism Cognitivist teaching methods aim to assist students in assimilating new information to existing knowledge, and enabling them to make the appropriate modifications to their existing intellectual framework to accommodate that information. BackgroundView of KnowledgeView of LearningView of MotivationImplications for TeachingJean PiagetWilliam G. PerryReferences Background Confirmation bias in science: how to avoid it One of the most common arguments against a scientific finding is confirmation bias: the scientist or scientists only look for data that confirms a desired conclusion. Confirmation bias is remarkably common—it is used by psychics, mediums, mentalists, and homeopaths, just to name a few. As you may guess from such a list, deliberate use of confirmation bias is held in low esteem by scientists, and allowing confirmation bias to get the better of your results is regarded as a particularly sad form of incompetence.

Constructivism (common misunderstandings) Summary: Constructivism as a paradigm or worldview posits that learning is an active, constructive process. The learner is an information constructor. People actively construct or create their own subjective representations of objective reality. New information is linked to to prior knowledge, thus mental representations are subjective. Originators and important contributors: Vygotsky, Piaget, Dewey, Vico, Rorty, Bruner is not a pedagogy An article by Sarah Bergsen, Erik Meester, Paul Kirschner and Anna Bosman So-called ‘educational innovations’ in which the teacher assumes the role of ‘facilitator, mentor or coach’ do not appear to be very successful. Nevertheless, ‘constructivist’ ideas are still popular in education, as evidenced by the everlasting large number of minimally guided instructional practices. Sarah Bergsen, Erik Meester, Paul A. Kirschner and Anna Bosman say: “We could and should know better by now.”

Trends Modern Trends In Education: 50 Different Approaches To Learning by Lisa Chesser, opencolleges.edu.au Education sprouts in many forms depending on how you look at it.