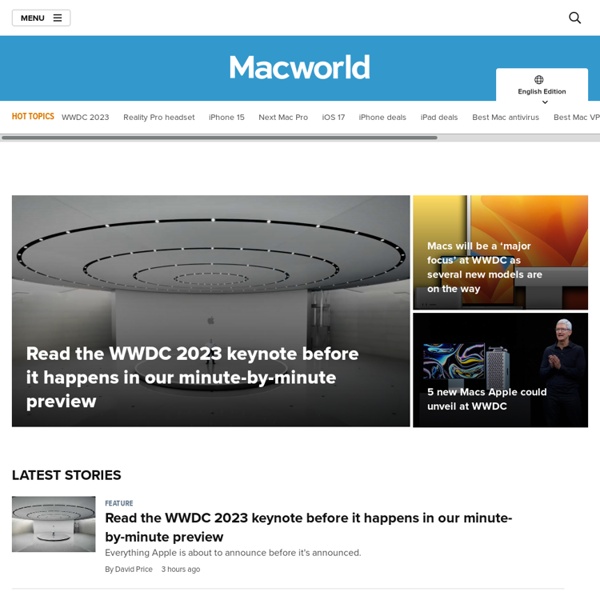 NEW! Topic Zones News headlines Will Apple release an iPhone Air? Here's what it could look likeSince the iPad Air was unveiled, designers have been coming up with convincing concepts for an 'iPhone Air' iPhone 6 release date, rumours and leaked images: new iPhone 6 concept designs hit the web as...When is the new iPhone 6 coming out? Will it be curved, or come with a bigger screen?

Design Striking Layouts for Your Own Cookery Book Using InDesign In this tutorial we’ll create a variety of layouts for a Cookery Book intended for self-publishing, either in print or as an eBook, using Adobe InDesign. I’ll show you how you can showcase simple, striking photos to create minimal, colourful designs for your pages. Let’s get cooking! Many thanks to Cameron Knight for the beautiful photos used in this tutorial. You can read Cameron’s tutorial for putting these together here. 15 Free Photoshop Plugins and Extensions for Web Designers Web designers should always be aware of the current news. In order to help them in their work brilliant designers from all over the world always try to invent new tools and find bright decisions. We want to bring to your attention a selection of useful photoshop plugins and extensions. You will definitely find something to your taste and interest among them. Advertisement CSS3Ps

Adobe Illustrator tutorial: Create Art Deco type art This tutorial’s featured artwork began life when Adam Pointer was commissioned by design agency Zip (zipdesign.co.uk) to produce a piece promoting the Sunday night event at the now-defunct London West End club, The End. Adam recently reworked the original, and here he takes us through how he created and assembled the different elements to bring an art deco feel to type illustration. The ‘C’ detailed here appears on the first in a set of 11 flyers that together spell out the name of the event: Clandestino. The night was billed as ‘a sultry gathering for the cosmopolitan house crowd’, and the keywords for the original brief were: colourful, seductive, European, fiesta, glamorous and secretive. Adam decided that a fun interpretation would be to put his own spin on pinup-girl imagery and have female figures interacting with giant letterforms.

Watch the Online Video Course InDesign Secrets If you've been using InDesign for any appreciable amount of time, then you have probably created some custom settings for yourself. Settings that you would like to, say, transfer to a second computer that you're using, like a laptop. Or maybe you want to share with other people in your workgroup, put it on the server for other people to use.

How to Easily Colorize a Black-and-White Photograph in Photoshop Jordan Roland is a staff designer/illustrator for the Shutterstock blog. This post was originally published on the Shutterstock blog and has been adapted with permission. Coloring a photo isn’t nearly as hard as you might think. In fact, it can be achieved in three simple steps using Photoshop. Read on for a basic method of colorizing a black-and-white picture, followed by some tips for building on this technique to create more stylized and dramatic results.

Create a Realistic 3D Old Western Badge in Illustrator and Photoshop CS6 The 3D features within Photoshop are becoming more and more useful with every release, and you would be wise to start learning the basics now. Gone are the days where you needed $10,000 software to create a decent looking 3D render, and I can prove it. This tutorial will teach you how to create a realistic 3D old western badge using Illustrator and Photoshop CS6. Let's get started. Inspire No one likes to fail. No one enjoys the feelings of embarrassment, the deflated ego, or the idea that your future is slowly swirling to financial ruin. I choose to own my failures. The Ultimate Guide To The Frequency Separation Technique The Ultimate Guide To The Frequency Separation Technique Chances are you have already learned what Frequency Separation (FS) technique is, as it became mainstream in the past few years. However, many FS technique users actually know very little theory behind it, thus have little control over its implementation. I’ve set out to research and collect all the important and useful information about it, so we can together learn how to become better at it.

12 Expert Tips For Photographing Cityscapes At Night Jimmy Mcintyre is a travel photographer and educator. His photos have been published in local and national magazines, including the BBC. His online courses on digital blending and post-processing can be found in his official website. design.tutsplus Adobe InDesign is a diverse software programme for creating beautiful designs for print and digital. Most designers will have a tried-and-trusted set of InDesign tools they consistently use in their daily workflow (guilty!), but aside from the ever-faithful features there are also some exciting tools and tips you may not know about. Whether you’re a newbie to the programme or a seasoned InDesign professional, there may be something in the following list that you haven’t yet discovered or used. Click the links to access detailed tutorials on some of InDesign's features.

Photoshop Experiment: 1 Photograph, 27 Countries, 27 Definitions of 'Beautiful' Philippines They say beauty is in the eye of the beholder, and if journalist Esther Honig has proven anything with her fascinating Photoshop project Before & After, it’s that whoever ‘they’ are (it turns out, Margaret Wolfe Hungerford) is right. The idea behind the project was simple: the 24-year-old radio journalist took to freelance website Fiverr to find Photoshop professionals from around the globe. 27 artists from 27 different countries have replied to her ad so far, and each of them got one photograph and the same instructions: make me look beautiful. The results are, if you’ll allow us a paradox, both expected and surprising. Expected because most of the artists, regardless of culture, performed certain alterations to the size of her nose, the bags under her eyes, the color of her skin etc. Surprising because of the vast differences and shocking transformations some of the images portray.

design.tutsplus In this tutorial we will demonstrate how to customize a typeface in Illustrator and then use Photoshop to create a stunning vintage detailed typographic design. Let's get started! Tutorial Assets The following assets were used during the production of this tutorial: