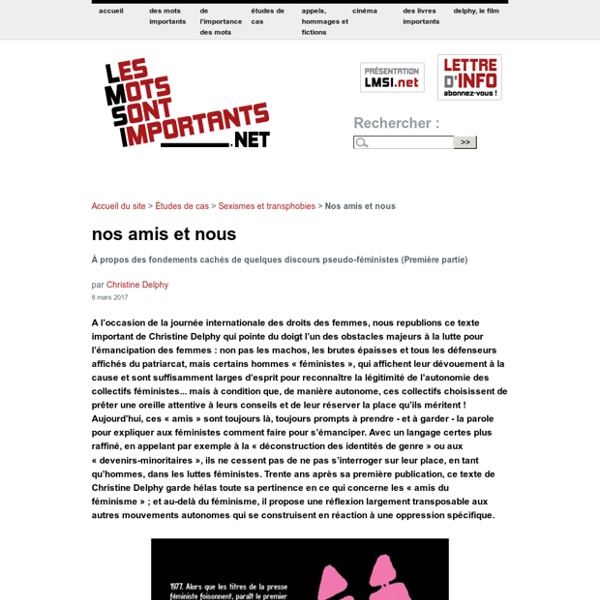 101 Everyday Ways for Men to Be Allies to Women I’ve considered myself a feminist and male ally to women for quite some time. When I took my first Women’s Studies class two years ago with Professor Denise Witzig, little did I know that it would take me down an unsuspecting, beautiful, and transformative path towards feminism. Below, I’ve complied a list of 101 everyday ways for men to be allies to women. I must acknowledge that this post was written with cisgender, heterosexual men as a possible, target audience due to the lack of support from this group. However, I feel that many of these points are applicable on a broader scale.

9 Ways to Be Accountable When You've Been Abusive As I sit in my bed and begin to type (beds are my favorite typing places), there is a part of me that says, Don’t write this article. There is a part of me that still resonates deeply with the fear and shame that surround the topics of abuse and intimate partner violence – the taboo that most communities have around talking not just about the fact that people experience rape and abuse, but that people we know and care about might be rapists and abusers. Perhaps most secret and shameful of all is the fear that we, ourselves, are or have been abusive – the fear that we could be those villains, those monsters in the night. Nobody wants to be “an abuser.” No one wants to admit that they have hurt someone, especially when so many of us have been hurt ourselves.

A Call to Arms for Decent Men – by Ernest Adams « The Feminine Miss Geek Hullo, readers. Bex here. This article comes from the amazing Ernest Adams of the Designer’s Notebook series on Gamasutra. Because of the content, Gamasutra declined to publish the article. So Adams sent out the call to spread his message across the internet.

awkwardfeministmoments.tumblr [Image description: Background is 6 piece pie style color split with pink and blue alternating. Foreground is a picture of a grey tabby cat wearing a yellow wig. Top text reads “That awkward moment when someone says something super shitty and you go blank” Bottom text reads “because you can’t decide whether to educate them gently or tear them apart” End description.]

What Men Can Do: Responding to Worthwhile Comments Toy Soldier recently left a comment on a post of mine that dealt with encouraging men to better recognize connections between violence by men in general and violence by men against women--my suggestion being that a strategy one might employ to get more men to better understand the role that traditional masculinity plays in men's violence against women is to better understand the role that traditional masculinity plays regarding men's violence in general. Toy Soldier thinks that the fact that I didn't talk about women's violence against men is not only worth noting, but also implies that I don't think that such violence and its victims are unimportant: It is unfortunate that in your description of the violence committed against males you fail to mention women as aggressors. Most child abuse is committed by women. Nearly 40% of the people who rape and sexual abuse males are women.

What You Can Do to Support Women’s Rights, Part III: Men in the Women’s Movement As both a male peer ed­u­ca­tor and a rad­i­cal fem­i­nist ac­tivist, one of the most com­mon ques­tions I hear from men about fem­i­nism is, What can I do? It is true that many men are open­ly hos­tile to­wards women and to­wards fem­i­nism, and most men (in my ex­pe­ri­ence) are at best am­biva­lent and some­what sus­pi­cious of fem­i­nism and fem­i­nist groups. But most men that I talk to at least pay lip ser­vice to the fun­da­men­tal doc­trine of fem­i­nism, that women de­serve the same rights as men and that any just so­ci­ety must in­clude an end to gen­der op­pres­sion. Flogging Babel: Is The Left Hand of Darkness Sexist? Twelve years ago, give or take a few, Gregory Frost and I guest taught one of Judith Moffett's science fiction classes. This was back when she was at the U of P. It was a good class. The experience was satisfying to everyone involved. Then, after the class, two of the female students approached Greg and me with a question that was obviously burning in them: "What do you think of The Left Hand of Darkness?"

Why I Am a Black Male Feminist When I was a little boy, my mother and father used to argue a lot. Some mornings, I would wake up to the alarming sound of my parents arguing loudly. The disagreement would continue until my father would yell with finality, "That is it! I'm not talking about this anymore!" The dispute would end right there. I F-ing Love Science Facebook Run By A Girl, Stupid People Respond With Their Outside Voice Last week, Elise Andrew, who runs the I F*cking Love Science Facebook page that has 4.3 million fans, posted a link to her newly created Twitter account, which included a photo of her. Cut to a bajillion people using their keyboards before their smarts, going berserk over the fact that the page was run by a girl. Let’s take a look at some of the super fun comments this post got! …How much time DO you spend picturing the people behind Facebook pages? Bro, can you put this info into a meme so I can understand it gooder?