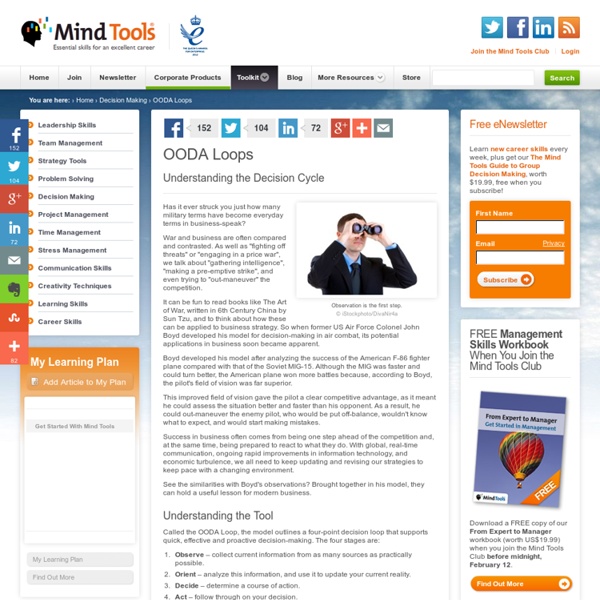 Understanding the Decision Cycle Observation is the first step. © iStockphoto/DivaNir4a Has it ever struck you just how many military terms have become everyday terms in business-speak? War and business are often compared and contrasted. As well as "fighting off threats" or "engaging in a price war", we talk about "gathering intelligence", "making a pre-emptive strike", and even trying to "out-maneuver" the competition. It can be fun to read books like The Art of War, written in 6th Century China by Sun Tzu, and to think about how these can be applied to business strategy. Boyd developed his model after analyzing the success of the American F-86 fighter plane compared with that of the Soviet MIG-15. This improved field of vision gave the pilot a clear competitive advantage, as it meant he could assess the situation better and faster than his opponent. Success in business often comes from being one step ahead of the competition and, at the same time, being prepared to react to what they do.

Are You Ready to Manage? - People Development Network All businesses face continuous changes in the business environment. Long term business sustainability is directly linked to the ability to continuously improve and Adapt To Change. Along with globalization came increased competitiveness and in today’s economic circumstances one of the biggest pressures most businesses face, is financial pressure –the pressure to maintain or improve business results in the midst of increasing competitive forces. The downfall of many businesses lies in their attempt to address these pressures with strategies that proved successful in the past…in an environment that today no longer exists.

This Is How To Be Productive: 5 New Secrets Proven By Research Want to know how to be productive? Create goals, make a plan and execute. We all know this is a good idea… and it never, ever seems to work. It’s like simplifying boxing down to “Just go into the ring and punch the other guy until he’s knocked out.” 3 Ways To Energise The Team Using Different Language I help leaders develop self- mastery, helping them to become confident in their own inner guidance. I collaborate with leadership experts, managers and HR professionals to help them get their own message and unique services and products to a wide audience. Using different expressions can energise the team My son had a bit of an “Aha moment” at the weekend.

How to Think When I applied for my faculty job at the MIT Media Lab, I had to write a teaching statement. One of the things I proposed was to teach a class called “How to Think,” which would focus on how to be creative, thoughtful, and powerful in a world where problems are extremely complex, targets are continuously moving, and our brains often seem like nodes of enormous networks that constantly reconfigure. In the process of thinking about this, I composed 10 rules, which I sometimes share with students. I’ve listed them here, followed by some practical advice on implementation. 1. Synthesize new ideas constantly. Design Thinking Comes of Age There’s a shift under way in large organizations, one that puts design much closer to the center of the enterprise. But the shift isn’t about aesthetics. It’s about applying the principles of design to the way people work.

10 requirements of the perfect manager If you could hire your next boss, what selection criteria would you use? Alan Norton shares a make-believe want ad aimed at finding the ideal manager. Haven't you wished at least once that you could hire your next boss? You might win the lottery, buy the company, and do just that. The gaze that hinders expression Autism: Altered connections between eye contact and facial mimicry - It is not enough to observe what abilities are altered in those with autism, we also need to understand how each function interacts with the others. In fact, whereas in typical subjects, joint attention appears to facilitate facial mimicry (both are skills relevant for human social interaction), the opposite holds true for those with autism. That is what a new study, just published in Autism Research, suggests.

25 Google Drive Tips You’ve Probably Never Heard Before Recently I moved over from Dropbox to Google Drive and found a few unexpected benefits. At first I had a little trouble managing the space since the 1TB on my Google Drive was bigger than my HDD, but after I got that sorted I started to learn some of the deeper features of Google Drive, some of which are pretty cool. Below is a list of the top tips and tricks I have learned from playing with Google Drive over the last few months. Work Well with Others 50% female cabinet appointments lead to 5000% increase in guys who suddenly care about merit in cabinet OTTAWA - With Prime Minister designate Justin Trudeau preparing to announce a cabinet that is 50% women, researchers have discovered a sharp 5000% increase in the number of men who suddenly have strong opinions about how cabinet appointments should be a “meritocracy.” Across the nation statisticians are at a loss to explain a recent and drastic jump in the number of men who have spontaneously developed hard opinions about the qualifications of Federal Cabinet Ministers. “This is affirmative action, and even though it has been statistically shown to improve working conditions over time, I don’t like it,” said longtime man Thomas Fielding. “Someone’s genitals don’t make them qualified for a job. Now if you’ll excuse me, I have to get back to my job as the manager of a pro sports team.” Several noted political scientists agree that Trudeau’s female quota is a controversial move.

6 Things Every Manager Wants from Employees Each job comes with its own set of requirements, but there are a few universal things every manager looks for in an employee. To impress your manager and earn a reputation for excellence, make sure you're delivering these six items. 1. Future - The best (and worst) ways to spot a liar Thomas Ormerod’s team of security officers faced a seemingly impossible task. At airports across Europe, they were asked to interview passengers on their history and travel plans. Ormerod had planted a handful of people arriving at security with a false history, and a made-up future – and his team had to guess who they were. In fact, just one in 1000 of the people they interviewed would be deceiving them. Identifying the liar should have been about as easy as finding a needle in a haystack. Using previous methods of lie detection, you might as well just flip a coin

The 12 Most Important Things I've Learned About Leadership “I am not afraid of an army of lions led by a sheep; I am afraid of an army of sheep led by a lion.” –Alexander the Great The quote provides insight as to why leadership is so crucial to entrepreneurship; the person at the top usually is the difference between success and failure. Most of us have encountered natural leaders -- people who instinctively do the right thing and effortlessly make average people into exceptional performers. But for the majority of us, leadership is something we have to work on. The million-dollar question is this: can leadership really be learned? Re-Recruit From the Leaky Pipeline by Seonaid Lee Pop quiz: Who is going to be the fastest to learn new technical skills, and get them up and running to a production level? A mid-level manager with no coding experienceA 17-year-old “tech wizard” with two years of hacking experienceAn elementary student who loves MinecraftA 40-year-old mother of three with a graduate degree in a technical discipline who has been home with the kids for a decade I’ve been watching two sets of articles go past my news feed for years. The first calls to get more people into STEM. The second reports on the attrition of women from those very same disciplines.

How to use search like a pro: 10 tips and tricks for Google and beyond Search engines are pretty good at finding what you’re looking for these days, but sometimes they still come up short. For those occasions there are a few little known tricks which come in handy. So here are some tips for better googling (as it’s the most popular search engine) but many will work on other search engines too. 1. Exact phrase The simplest and most effective way to search for something specific is to use quote marks around a phrase or name to search for those exact words in that exact order.