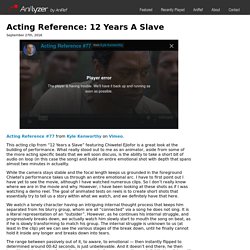 This acting clip from “12 Years a Slave” featuring Chiwetel Ejiofor is a great look at the building of performance. What really stood out to me as an animator, aside from some of the more acting specific beats that we will soon discuss, is the ability to take a short bit of audio on loop (in this case the song) and build an entire emotional shot with depth that spans almost two minutes in actuality. While the camera stays stable and the focal length keeps us grounded in the foreground Chiwtel’s performance takes us through an entire emotional arc. 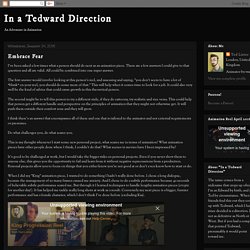 There are a few answers I could give to that question and all are valid. All could be combined into one super answer. The first answer would involve looking at this person's reel, and assessing and saying, "you don't seem to have a lot of *blank* on your reel, you should do some more of that. " This will help when it comes time to look for a job.

It could also very well be the kind of advice that could cause growth in this theoretical person. The second might be to tell this person to try a different style, if they do cartoony, try realistic and vice versa. I think there's an answer that encompasses all of these and one that is tailored to the animator and not external requirements or pressures. Art Fight - About. About Video Click here to see the about video! 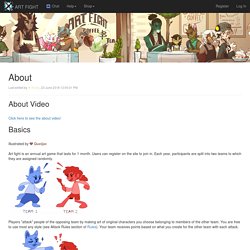 Basics Illustrated by Queijac Art fight is an annual art game that lasts for 1 month. Users can register on the site to join in. Project 1324. NeonMob - A Game & Marketplace of Digital Art Trading Cards. The AWN Career Connections. How To Come Up With Great Story Ideas In Animation & Short FilmsSkwigly Animation Magazine. At some point we have all come up against it. 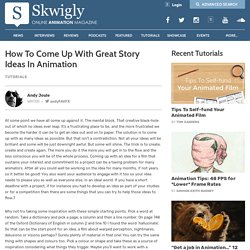 The mental block. That creative black-hole out of which no ideas ever leap. It’s a frustrating place to be, and the more frustrated we become the harder it can be to get an idea out and on to paper. The solution is to come up with as many ideas as possible. But that isn’t a contradiction. Why not try taking some inspiration with these simple starting points. Animation Tips: 48 FPS for *Lower* Frame Rates - Skwigly Animation MagazineSkwigly Animation Magazine. For many working in animation, we generally limit our choice of frame rate to 1s or 2s depending on what time and budget allow. 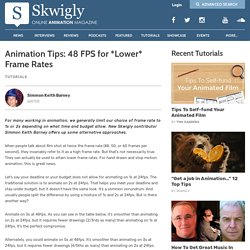 New Skwigly contributor Simmon Keith Barney offers up some alternative approaches. When people talk about film shot at twice the frame rate (48, 50, or 60 frames per second), they invariably refer to it as a high frame rate. But that’s not necessarily true. They can actually be used to attain lower frame rates. For hand drawn and stop motion animation, this is great news. 13 tips for creating the best animation showreel - Features. Bluegfx sur Twitter : "Our friends @AnimDojo have published some superb intro to #Maya tutorials, for people wanting to learn 3d animation. They're super coherent and come with a free rig and marking menu - perfect for beginners! @Autodesk_ME. Caitlin Elise Willis Shares Her Journey As A Nick Artist Program Finalist. InterviewsAnimationNickelodeonDisclosure: This post may contain affiliate links. 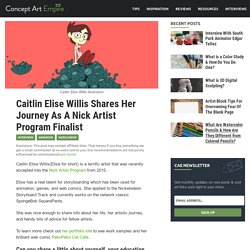 That means if you buy something we get a small commission at no extra cost to you. Our recommendations are not purely influenced by commissions(learn more) Caitlin Elise Willis(Elise for short) is a terrific artist that was recently accepted into the Nick Artist Program from 2015. Elise has a real talent for storyboarding which has been used for animation, games, and web comics. She applied to the Nickelodeon Storyboard Track and currently works on the network classic SpongeBob SquarePants. She was nice enough to share info about her life, her artistic journey, and handy bits of advice for fellow artists. My Life as a Cartoon Network Intern (and how I... - The Artwork of Sean Williams. Creative Access. Animation 2018. Following on from the success of Listen to Britain 2017 which offered a unique platform to emerging documentary makers, BBC Four in partnership with BFI are now searching for a suite of short films to showcase the creativity and diversity of the next generation of animation talent working in the UK today. 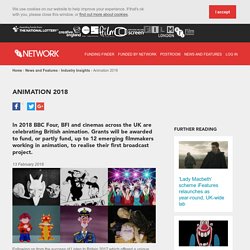 We will be giving up to 12 individuals or teams the opportunity to have their film selected by a panel of representatives from BBC, BFI and the world of British animation. If successful, you will be awarded a grant of between £2,000 and £10,000 towards the creation or completion of your original film, the opportunity to have your film screened at BFI Southbank and the chance for it to be broadcast on BBC Four in late 2018. What are we looking for? Watch a selection of great British animations which might inspire you. What makes British animation British? Explore the BFI’s Animated Britain collection on BFI Player (BFI National Archive). 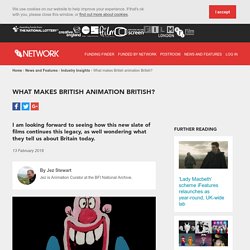 In 2018 the BFI is offering a look back through eleven decades of history since the first documented uses of stop-motion animation in the UK. And now, in partnership with BBC Four, we are funding up to 12 new animated shorts to look forwards to a new generation of emerging talent. But putting aside some basic geography, can we identify any defining characteristics of animation produced in Britain? Should you join a society? The importance of having a studio space. 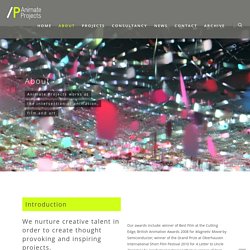 Abigail co-produced Chris Shepherd’s Johnno’s Dead, a hybrid animation/live action short that premiered at the London International Animation Festival. She produced the multi-media installation Altered Landscapes for artist Juan delGado that has been touring the UK since March 2016. Animation Tutorials Collection. "I Moved to LA to Work in Animation" new 70-page comic. I moved to LA in 2015 to storyboard for animation studios. 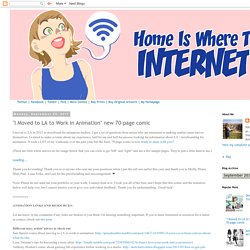 I get a lot of questions from artists who are interested in making similar career moves themselves. I wanted to make a comic about my experience, half for me and half for anyone looking for information about LA / storyboarding for animation. It took a LOT of my weekends over the past year, but the final, 70-page comic is now ready to share with you!!

Vancouver. Paris. London. Job board for the video game industry. Video Game Jobs, Animation Jobs, VFX Jobs, TV & Film Jobs, Software Jobs » CreativeHeads.net. Entertainment Jobs and Internships. Pocket Gems – Careers. Ecole de l'image Les Gobelins. Sick of the Radio -Online magazine for Art, Design, Music, Culture. 10 good reasons for turning down work. When you're starting out as a freelancer and haven't quite found your feet, it's tempting to say yes to any work that comes your way. You'll soon discover, though, that it pays to discriminate a little. 25 tips for staying sane as a freelancer Disqualifying clients who don't seem like a good fit for you should be one of your first priorities when you meet a potential client. You save the time and energy that you would spend learning about the client and their business. As a result, that time and energy can be spent finding better clients and bigger pay cheques.

Art, Animation & Film Analysis by James Chiang. The first 3 shots of this 16 scene sequence where Baloo and Mowgli meet for the first time in Walt Disney’s 1967 classic, The Jungle Book. Let’s begin our 5 Part analysis of Frank Thomas’ and Ollie Johnston’s marvelous work in this portion of The Jungle Book: Scene 1: A Lesson in broken rhythm and natural action. I love the unplanned feeling of this shot even though it’s clearly well-designed in terms of layout, camera move and action choreography. Notice how he comes into screen with a beautiful line of action that helps “open up” the layout and action: Throughout this shot Baloo moves from screen right to left, but does so in an uninhibited fashion — moving forward, then back and changing his gait and gestures as he flows with the musical tempo inside his head.

Improve your drawing speed with these tips - StoryboardArt - Creating Storyboards In A Flash So there you are at your desk. You have your script, check. Your monitor and tablet, check. Art program set up with the shortcut keys you like, check. Your pen calibrated to the proper settings, check. You start pumping away at boards and feel like you can finish the whole thing in one night. Set up your own workspace. If you're working from home and find yourself constantly being distracted, setting up a dedicated workspace could be just the solution. Whether you're learning how to draw, working on your design portfolio or creating a new logo design, a dedicated space to do so can work wonders for your creativity.

Preparation of a workspace is particularly important where artists are concerned. In this article, I'll give you a few tips based on my own experience to make your workspace and, by extension, your work, comfortable and rewarding. 01. Make it comfortable. 30 Types of Navigation Equipment and Resources Use Onboard Modern Ships. Doing Hand-Drawn Animation Using Photoshop & After Effects CS6 (PART 1) This Tutorial is part of a series. Please read my Introduction to Hand-Drawn and Organic Looks Tutorials before proceeding. Character Design References. What is a typical day for you, and who are the people you work, collaborate or share your creative time with? Themes by rhaegara. Davidbordwell.net : home. How to Create Character Animation Poses. Animation Mentor Co-Founder and Creatures Workshop Mentor, Shawn Kelly writes about animation and what he’s learned in his animation career.

Shawn currently serves as a Lead Animator at Industrial Light & Magic, where he has worked on numerous films including The Avengers, Battleship, the Transformers film franchise, Rango, Indiana Jones and the Kingdom of the Crystal Skull, War of the Worlds, the Star Wars: Episode I – III film franchise, The Day After Tomorrow, Pirates of the Caribbean: The Curse of the Black Pearl, Hulk, A.I. Artificial Intelligence, and The Adventure of Rocky & Bullwinkle. The Definitive Guide to Hand Lettering Tutorials Online - Skillshare Blog. Otte's workshop. Download Stopwatch - Stay On Top Stopwatch. Character Design References. International Women’s Day. Here at BioWare, we’re proud of the team we’ve built. 51 Great Animation Exercises to Master. Do you have any advice or tips for solo animators... Livet sprillar av hopp och pop, gingercatsneeze: Contour vs Structural... Livet sprillar av hopp och pop, gingercatsneeze: wehaveplenty: Click to...

Livet sprillar av hopp och pop, gingercatsneeze: 1. Ah Fai was a chief animator... 7 ways to overcome your insecurities as an animator. Character Animation. The Increasing Role of Character Animation in Video Games. The Key to Memorable Animation. The Ultimate Guide to Animation Schools. How to hold a pencil correctly. You can have the best pencils in the world, but unless you know how to draw with them, they're pretty useless. Stock Photography, Royalty-Free Photos &amp; The Latest News Pictures. Blow up your work: How to enlarge, expand and make giant graphics - FESPA. In Sunday Sketching, Christoph Niemann Tells the Brutal Truth About the Creative Process.

Temple of the Seven Golden Camels: What Makes A Good Story Portfolio/Story Artist? What I've learned about combining 2D and 3D.

The Animator Letters Project. Teacher blogs. Useful programmes. Writing resources. Traditional. Animator Health and Wellness. Digital art resources. Artists portfolios/inspiration. Animation resources. Studios/companies. To Anyone Who Thinks They're Falling Behind In Life. Why you must make time for personal projects.