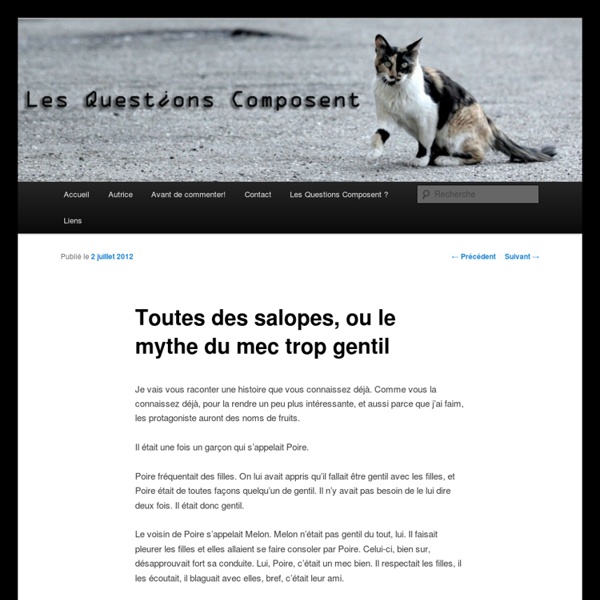 Stereotypes can be damaging, so how can we stop children picking them up? How can modern parents raise the next generation to be free from corrosive gender and racial stereotypes? By the time children start elementary school, gender and race shape their lives in many ways that parents might want to prevent. As early as first grade, girls are less likely than boys to think members of their own gender are “really, really smart.” And by just age three, white children in the United States implicitly endorse stereotypes that African-American faces are angrier than white faces. The logic of the friendzone. We all broke the Batman. Babies are the worst roommates. Found some inspiration outside of my lab. The bottom is the best part. My dog is just learning romance.

Lamenting The Friend Zone, Or: The “Nice Guy” Approach To Perpetrating Sexist Bullshit Everyone’s heard of friendzoning – even if they don’t know the word, they sure as hell know the concept. It’s what happens time and again to unfortunate Nice Guys who, despite being nothing but sugar and spice to the girls they love, are nonetheless denied the sexual relationships they so obviously deserve and are instead treated like platonic equals – a terrible, unfair fate spawned by the dark side of feminism. And if you thought even part of that statement was correct, Imma stop you right there.

Raising a Moral Child Genetic twin studies suggest that anywhere from a quarter to more than half of our propensity to be giving and caring is inherited. That leaves a lot of room for nurture, and the evidence on how parents raise kind and compassionate children flies in the face of what many of even the most well-intentioned parents do in praising good behavior, responding to bad behavior, and communicating their values. By age 2, children experience some moral emotions — feelings triggered by right and wrong. To reinforce caring as the right behavior, research indicates, praise is more effective than rewards. Rewards run the risk of leading children to be kind only when a carrot is offered, whereas praise communicates that sharing is intrinsically worthwhile for its own sake. But what kind of praise should we give when our children show early signs of generosity?

The 5 Most Ridiculously Sexist Superhero Costumes Female superhero costumes are the comic industry's "No Cooties" signs: They prove that the people who designed them think about girls (a lot) but don't really know how they work and are making sure it stays that way. I am not an enlightened man. I consider the wipe-clean cheerleader costume a greater advance in clothing technology than the spacesuit. “Private Parts” – Katja Tetzlaff: Illustrator. Educator. Activist. 25 different anatomical variations of the vulva “Shhhhh! They are called “private” parts for a reason!” Every plant, animal, and, needless to say, human has genitals so we shouldn’t be ashamed to talk about them, especially with youth who are often under- or misinformed about endless variations of sex anatomy and functioning. Despite the two “standard” versions of a penis and a vagina you see in textbooks, penises and vaginae (pl. of vagina) come in all shapes, sizes, and colors.

She didn’t fight back because you told her not to. « Fugitivus By the by, I consistently use that title because I mean for it to operate as a trigger warning. I write a lot about rape, but sometimes I write about other things, and I don’t want anybody taken off-guard transitioning from “help computer” into wtf rape-talk. Case you were wondering. I was re-reading my five billion goddamn posts about rape and force, and I realized (surprise!) there is a more succinct way for me to express what I was thinking. I tend to go on and on, circling a subject, trying to get out everything in my head that possibly relates to it, and then sometimes find I didn’t really address the subject at all. The Myth of Misandry The term ‘misandry’ often strikes me as a kind of urban myth in the world of gender politics. Its origins are real, and the lessons it can teach us are certainly relevant – but it has been so distorted by time and hysteria that it’s become monstrous, to the point where we often don’t understand what it is or where it came from. A bit like a vampire, or Cory Bernardi. Let’s start with the bare bones. Misandry is defined as the hatred or dislike of men or boys, characterised by discrimination, denigration, sexual objectification, and/or violence against males.

What is “sexism”? Short definition: Sexism is both discrimination based on gender and the attitudes, stereotypes, and the cultural elements that promote this discrimination. Given the historical and continued imbalance of power, where men as a class are privileged over women as a class (see male privilege), an important, but often overlooked, part of the term is that sexism is prejudice plus power. Thus feminists reject the notion that women can be sexist towards men because women lack the institutional power that men have. Sexism versus gender-based prejudice