The History of Terezin — Terezin - Children of the Holocaust. Many educated Jews were inmates of Terezin. 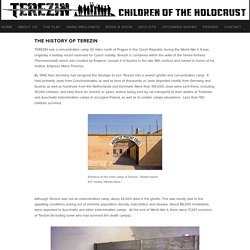 Unlike other camps, Terezin’s detainees included scholars, philosophers, scientists, visual artists, and musicians of all types, some of whom had achieved international renown, and many of these contributed to the camp's cultural life. The Nazis kept a tight rein on the world’s perception of activities within Terezin. In a propaganda effort designed to fool the Western allies, the Nazis publicized the camp for its rich cultural life. The Czech composer Rafael Schächter was among those held at the Terezin camp. In 1943, he conducted an adult chorus of 150 Jews which engaged in 16 performances of the massive and complex Requiem by Giuseppe Verdi — learned by rote from a single vocal score and accompanied by a legless upright piano —before audiences of other prisoners, SS officers, and German army staff members.

Guidelines educators. Childhood Before and During the Holocaust. With the outbreak of the Second World War, Yurik’s father was drafted into the Polish army. 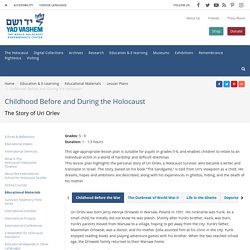 At the end of 1940, the nine-year-old was forced into the ghetto along with his family. The Warsaw Ghetto was a cordoned-off area that housed some 450,000 Jews in extremely cramped conditions. The situation in the ghetto was extremely harsh: Many Jews succumbed to disease and illness, and children were particularly at risk. In an effort to cope with this difficult new reality, Yurik and his brother made up stories. Student/Teacher Reading: Holocaust survivor shares story with young cast of 'Terezin' play - The Boston Globe. NEWBURYPORT - The actors of “Terezin, Children of the Holocaust’’ are mostly teenagers, a few even younger. 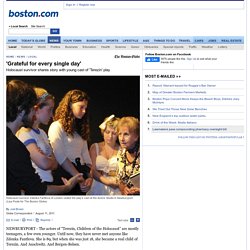 Until now, they have never met anyone like Zdenka Fantlova. She is 89, but when she was just 18, she became a real child of Terezin. And Auschwitz. And Bergen-Belsen. “I am a happy person . . . grateful for every single day,’’ she says. Fantlova told her story in a 2010 book, “The Tin Ring: How I Cheated Death.’’ Playwright Anna Smulowitz is herself the child of Auschwitz survivors, born in a displaced persons camp just after World War II.

She wrote “Terezin’’ some 40 years ago to honor her parents and many family members who did not survive the camps. Hidden Children: A Pledge for Action. Nesse Godin addresses group in Hall of Witness (photo provided courtesy of speaker) Overview This lesson provides an opportunity for students to explore personal accounts of young people and hidden children during the Holocaust by means of USHMM Identification Cards and the online exhibition Life in Shadows and to relate difficult historical circumstances to their own lives today. 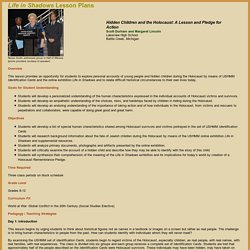 Goals for Student Understanding. Bringing Art into Holocaust Instruction. As a teacher, I am constantly thinking of new ways to engage my students. 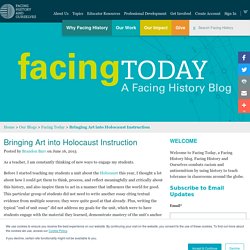 Before I started teaching my students a unit about the Holocaust this year, I thought a lot about how I could get them to think, process, and reflect meaningfully and critically about this history, and also inspire them to act in a manner that influences the world for good. This particular group of students did not need to write another essay citing textual evidence from multiple sources; they were quite good at that already. Plus, writing the typical "end of unit essay" did not address my goals for the unit, which were to have students engage with the material they learned, demonstrate mastery of the unit’s anchor texts, and make a significant contribution to the larger community.

IWitness is a wonderful resource; it's filled with searchable testimonies and activities that can easily be incorporated into a Holocaust unit. Next I reached out to local Holocaust survivor, artist, and author Ava Kadishson Schieber. The Holocaust: assessing responsibility and conscience – Lesson Plan. By Paul Wieser and Syd Golston Introduction Students will learn about the pressures of society and the struggles of conscience that operated during the Holocaust and in contemporary situations. 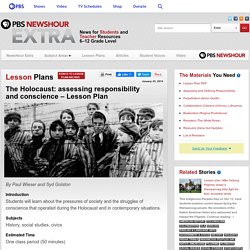 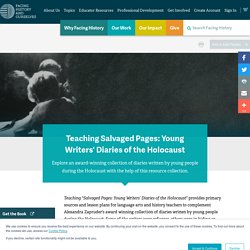 After being subjected to increasingly restrictive anti-Jewish measures following the German occupation of the Netherlands in 1940, the Flinker family fled to Belgium in 1942. In Belgium, Moshe and his family were able to pass as non-Jews with the help of false identity papers and relative anonymity. Moshe was a deeply religious young boy who grappled with the theological problems posed by the unprecedented persecution of the Jews. He was also a gifted linguist who knew and studied eight languages, including Arabic, which he saw as fundamental to his future life in Palestine. In April 1944, after being betrayed by a known Belgian Jewish collaborator, Moshe, his mother, and his sisters Esther Malka and Leah, were arrested at their home and deported to Malines.

Two weeks later, Moshe’s father was caught and sent to Malines, where he found his family. Jewish survivors of the Holocaust - Oral history. Short description: Recordings in this collection can be played by anyone. 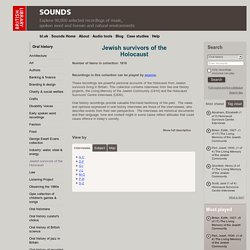 These recordings are powerful personal accounts of the Holocaust from Jewish survivors living in Britain. Voices of the Holocaust. During the 1930s and 40s, the Nazis and their collaborators murdered six million Jews. 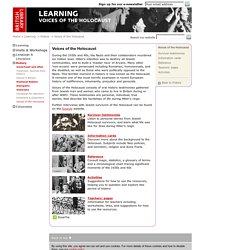 Hitler's intention was to destroy all Jewish communities, and to build a 'master race' of Aryans. Many other 'non-aryans' were persecuted including Romanies, homosexuals, and the disabled, as well as those who were politically opposed to the Nazis. This terrible moment in history is now known as the Holocaust. Jewish survivors of the Holocaust - Oral history.