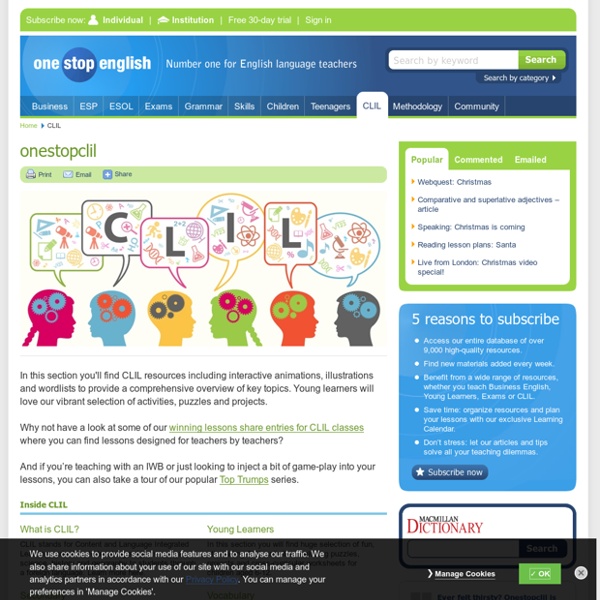 CLIL Cascade Network CCN is about collaboration: sharing of ideas, experiences and resources. CCN Info CLIL 2010 Proceedings Arena 5 TED-Ed Lessons for book lovers When did novels stop being novel? Do comic books belong in school? How do you make a pop-up book, anyway? Bulgaria Course - Putting CLIL into Practice - factworld.info The CLIL Courses – Putting Secondary CLIL into Practice (PSCIP) and Putting Primary CLIL into Practice (PPCIP) – offer a comprehensive combination of CLIL theory and practice with the aim of equipping teachers with the ideas and skills they need to help their students work through curriculum material in English, and support students when they are asked to speak and write about these subjects in the foreign language. Course Dates for 2019 PSCIP I - Monday 20th July to Friday 24th July 2020 (CLIL Masterclass) PSCIP II - Monday 27th July to Friday 31st July 2020 PPCIP - Monday 3th August to Friday 7th August 2020 Putting Secondary CLIL into Practice - Overview PSCIP I will be a special CLIL Masterclass delivered by myself and, I'm very pleased to annouce, Phil Ball. As co-authors (with John Clegg) of OUP's Putting CLIL into Practice, we've managed to put our ideas into a course we will co-teach, so you get both of us for the price of one!

AAA Math Index of Exercises A-B C D E F G H I-K L M N O P Q-R S T-Z AAA Math Home (Use the "BACK" button to return to top) Oxford City Council praised for introducing gender neutral 'MX' title on paperwork One of the country’s biggest councils has been praised for introducing gender neutral titles on forms. Oxford City Council told The Independent it has approved plans to include ‘Mx’ as an option on paperwork, alongside traditional terms such as Miss, Ms, Mrs and Mr. The change was made following recommendations from the council’s Equality and Diversity Group as a means of making the council more trans-inclusive; including non-binary people who can prefer the ‘Mx’ title as it does not denote a gender. Councillor Tom Haynes, Vice-Chair of Oxford City Council Scrutiny Committee told The Independent: “The council’s workforce has been changing to look more like the diverse communities that it serves. Good policies have helped to bring this about and tackle discrimination but further improvements are possible.

Berritzegune Nagusia A Content-Based approach to teaching and learning second languages has been adopted both for INEBI and BHINEBI. The content-based teaching-learning approach provides a very adequate frame to organise various aspects of this proposal. It helps make the acquisition of language parallel to that of natural language acquisition and of concept development. This approach promotes the teaching of languages through the teaching of contents and it is based on a communicative methodology, far away from the traditional and grammatical language teaching methods that propose unreal and often irrelevant activities. CLIL (Content and Language Integrated Learning) has been applied into any teaching-learning contexts where the instruction language is not the learner’s L1.

Murder in the Classroom - Murder Mystery Game - Education of 21 Share Murder in the Classroom - Murder Mystery Game Description This is an activity for the ESL classroom though it can alo be used in other contexts. The slide deck is adapted from “Murder in the the Classroom” a lesson plan on One Stop English and you can find that via the link below. Your CLIL In this monthly series, Keith Kelly provides a comprehensive lesson plan focusing on both content and language, accompanied by a useful word list highlighting language used in core function areas of different subjects. These lesson plans and word lists are the result of analysis into the language of the content subjects: geography, biology, chemistry and physics. Your CLIL has just got bigger! In addition to the available word lists that display examples of functional language in the areas of geography and science, Keith Kelly is now providing a related lesson plan to bring in-depth content and language learning to your classroom.

Clil4U CLIL implementation with pools of resources for teachers, students, and pupils Back to Top The project needs were based on several reports, e.g. Eurydice “Content and Language Integrated Learning (CLIL) at School in Europe 2006” which in “Factors inhibiting general implementation” points at a need for training language teachers in the special skills needed to provide CLIL through initial and in-service training programs devoted to methods used to teach a subject in other languages. The report also points at a need for teaching materials geared to CLIL in the target language that cover subjects in the national curriculum. In “CLIL/EMILE in Europe”, the recommendations for extending good practice proposes to develop thematic CLIL modules that would also act as a means for developing teacher competence in CLIL.

Bring Language to Life with a CLIL Project CLIL just clicks. With what we know about the importance of making connections in student learning, this methodology just seems to make sense. By now, most of us are familiar with the benefits of CLIL (Content and Language Integrated Learning). What you may not know is that there are almost as many different ways to implement CLIL as there are learning styles, with a seemingly limitless buffet of lesson themes and activities to choose from.