The philosophy of The Matrix 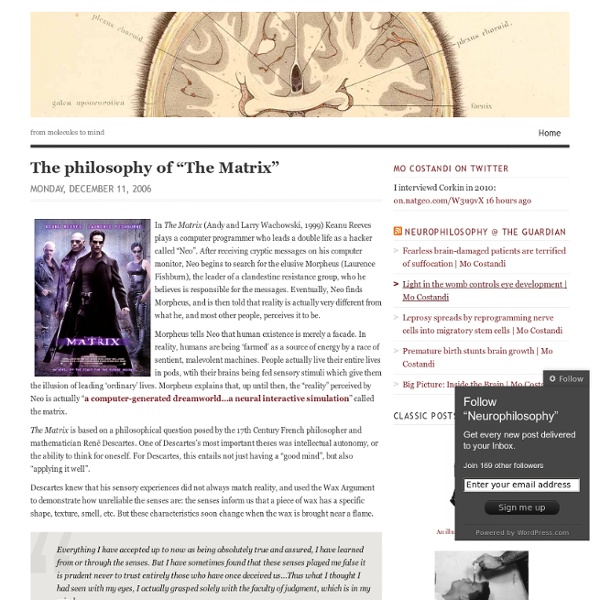 In The Matrix (Andy and Larry Wachowski, 1999) Keanu Reeves plays a computer programmer who leads a double life as a hacker called “Neo”. After receiving cryptic messages on his computer monitor, Neo begins to search for the elusive Morpheus (Laurence Fishburn), the leader of a clandestine resistance group, who he believes is responsible for the messages. Eventually, Neo finds Morpheus, and is then told that reality is actually very different from what he, and most other people, perceives it to be. Morpheus tells Neo that human existence is merely a facade. In reality, humans are being ‘farmed’ as a source of energy by a race of sentient, malevolent machines. People actually live their entire lives in pods, wtih their brains being fed sensory stimuli which give them the illusion of leading ‘ordinary’ lives. The Matrix is based on a philosophical question posed by the 17th Century French philosopher and mathematician René Descartes. Descartes’s argument is an epistemological one.

The Biology of Belief: Here's How to Change Your Reality "So many of us are leading limited lives not because we have to but because we think we have to." Many people believe they are who they are, and that they have limited means to change their health or life direction. "It is what it is," they say, "because of my genetic makeup". Well, maybe not. What does this mean, "we think we have to"? According to Dr.

Perceptual adaptation Perceptual adaptation is a unique function of the brain that accounts for the differences viewed in the world, as it relates to the senses. This phenomenon occurs in all senses, including vision, hearing, touch, and smell. An example is when images sensed through the eyes are relayed to the visual cortex of the brain, and if vision is altered slightly, the brain accounts for the difference and will allow one to perceive the world as "normal." Incorporating Philosophy in Every Psychology Course and Why it Matters Psychology undergraduate students often have the notion that philosophy is dead and gone. I say this because many of these same students have overtly voiced this view when I have attempted to introduce philosophical concepts at the beginning of a Theories of Personality Course. They are Psychology Majors, after all, the students explain, and they often wonder out loud what we might be doing exploring various philosophical assumptions at the beginning of a Personality course. In this particular course, I often begin with an examination of Aristotle’s four causes, and in many cases, the student response is to ask pointedly, “Aristotle? Who is he, again?

10 Amazing Examples of Mind Over Matter Humans While we often think of our bodies and minds as two distinct entities, it turns out they are much more entwined than we might assume. Researchers are continually finding evidence that the brain has a distinct power to manipulate the body’s physiology. As these 10 examples show, the mind/body connection can work in our favor or detriment, depending on our knowledge of a situation and our ability to control our thoughts. Judging by their ability to meditate for hours on end, to abstain from food for days, and their vows of silence, most us would agree that Tibetan Monks have better control over their minds and bodies than the average person. Still, what’s particularly amazing is some of them can control physiological processes, such as blood pressure and body temperature – feats many medical doctors find astounding.

Humans Have a Lot More Than Five Senses Today I found out humans have a lot more than five senses. It turns out, there are at least nine senses and most researchers think there are more like twenty-one or so. Just for reference, the commonly held definition of a “sense” is “any system that consists of a group of sensory cell types that respond to a specific physical phenomenon and that corresponds to a particular group of regions within the brain where the signals are received and interpreted.” The commonly held human senses are as follows: What It Feels Like to Be an Octopus On a recent Sunday, at my local Italian market, I considered the octopus. To eat the tentacle would be, in a way, like eating a brain—the eight arms of an octopus contain two-thirds of its half billion neurons. Delicious for some, yes—but for others, a jumping off point for the philosophical question of other minds. “I do think it feels like something to be an octopus,” says Peter Godfrey-Smith, a professor of philosophy at CUNY Graduate Center, who has spent almost a decade considering the idea. Stories of octopuses’ remarkable ability to solve puzzles, open bottles, and interact with aquarium caretakers, suggest an affinity between their intelligence and our own.