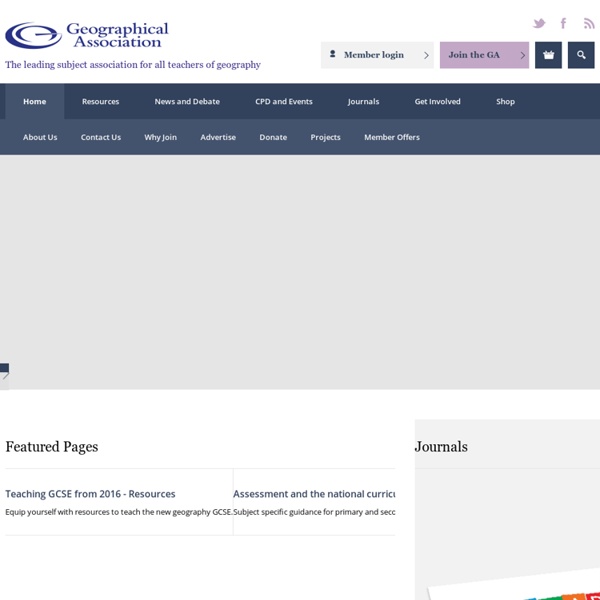 What's New 2014 National Curriculum Information, resources and links to support you in your planning for the 2014 national curriculum. 2014 UK floods (KS3-5) Teaching resources, lesson activities, contemporary case studies and links exploring the formation of storms and the effects and possible solutions to flooding. Global Learning Programme

Understanding and Teaching the Australian Curriculum: Geography for Primary Schools Following the recent publication of the first-ever Australia Curriculum: Geography for F–12, primary school teachers are expected to play the key role in implementing the curriculum in Australian schools – yet most primary teachers are not geography scholars, and many are likely to lack confidence in teaching the subject due to their uncertainty about what it entails. Understanding and Teaching the Australian Geography Curriculum for Primary Schools is designed to ease the burden of primary teachers by showing them how to understand and use the curriculum they are being asked to teach. Features of the book include: By unpacking the Australian Curriculum: Geography in terms of that non-geographers can easily understand, this book takes work out of standards-aligned geography instruction, proving that geography is an interesting and important subject which imparts essential understandings and skills and contributes to the personal and social development of young children.

Earth at Night 2012 Account Options Sign in Earth at Night 2012 The Australian Curriculum v6.0 Geography: Rationale Rationale Geography is a structured way of exploring, analysing and understanding the characteristics of the places that make up our world, using the concepts of place, space, environment, interconnection, sustainability, scale and change. It addresses scales from the personal to the global and time periods from a few years to thousands of years. Geography integrates knowledge from the natural sciences, social sciences and humanities to build a holistic understanding of the world.

The Australian Curriculum v6.0 Technologies: Technologies Technologies Rationale Technologies enrich and impact on the lives of people and societies globally. Australia needs enterprising individuals who can make discerning decisions about the development and use of technologies and who can independently and collaboratively develop solutions to complex challenges and contribute to sustainable patterns of living. 40 Maps That Will Help You Make Sense of the World If you’re a visual learner like myself, then you know maps, charts and infographics can really help bring data and information to life. Maps can make a point resonate with readers and this collection aims to do just that. Hopefully some of these maps will surprise you and you’ll learn something new.

40 maps that explain the world By Max Fisher By Max Fisher August 12, 2013 Maps can be a remarkably powerful tool for understanding the world and how it works, but they show only what you ask them to. So when we saw a post sweeping the Web titled "40 maps they didn't teach you in school," one of which happens to be a WorldViews original, I thought we might be able to contribute our own collection. Some of these are pretty nerdy, but I think they're no less fascinating and easily understandable. A majority are original to this blog, with others from a variety of sources. I've included a link for further reading on close to every one. Early world maps Antiquity Babylonian Imago Mundi (c. 600 BCE) A Babylonian world map, known as the Imago Mundi, is commonly dated to the 6th century BCE.[1][2] The map as reconstructed by Eckhard Unger shows Babylon on the Euphrates, surrounded by a circular landmass showing Assyria, Urartu (Armenia)[3] and several cities, in turn surrounded by a "bitter river" (Oceanus), with seven islands arranged around it so as to form a seven-pointed star. The accompanying text mentions seven outer regions beyond the encircling ocean. The descriptions of five of them have survived:[4] the third island is where "the winged bird ends not his flight," i.e., cannot reach.on the fourth island "the light is brighter than that of sunset or stars": it lay in the northwest, and after sunset in summer was practically in semi-obscurity.The fifth island, due north, lay in complete darkness, a land "where one sees nothing," and "the sun is not visible."

Guess the Travel Destination! Inspiration for your next Break No matter what your budget allows, we will help you save your pennies. Lovers of a luxury board basis such as full-board or all-inclusive will rejoice when they see the choice. From Ptolemy to GPS, the Brief History of Maps Last spring, a 23-year-old woman was driving her car through the Ontario town of Tobermory. It was unfamiliar territory for her, so she was dutifully following her GPS. Indeed, she was so intent on following the device that she didn’t notice that her car was headed straight for Georgian Bay—so she drove down a boat launch and straight into the frigid water.

Three Geography Games Based on Google Maps and Google Earth One of the things that I emphasize to students before they embark on any kind of research or problem-solving task is to take a good long look at the information that they already have before them. To that end, I'll often request that they construct a list of what they know about a topic or problem before they begin to search. Playing one of the following three Google Maps-based games is a fun way to reinforce the concept of using prior knowledge and observations. GeoGuessr is an addictive geography game that is based on the Google Maps Street View imagery. When you visit GeoGuessr you can choose to play as a single player or you can register to challenge another player.

The Geographical Association (2013) is a website with the objective of furthering geographical knowledge and understanding through education. Teachers, students, tutors, and academics across all levels of education are supported through journals, publications, training events, projects, websites and by lobbying government about the importance of geography. The site has links to teacher supports and resources that are available for immediate download. Although based in the UK, the supports are useful to the Australian perspective; particularly for supporting the curriculum in understanding world perceptions. References The Geographical Association. (2013). Geographical Association. Retrieved from by mcclure88 Jun 9