What are some top strategies for conversion optimization 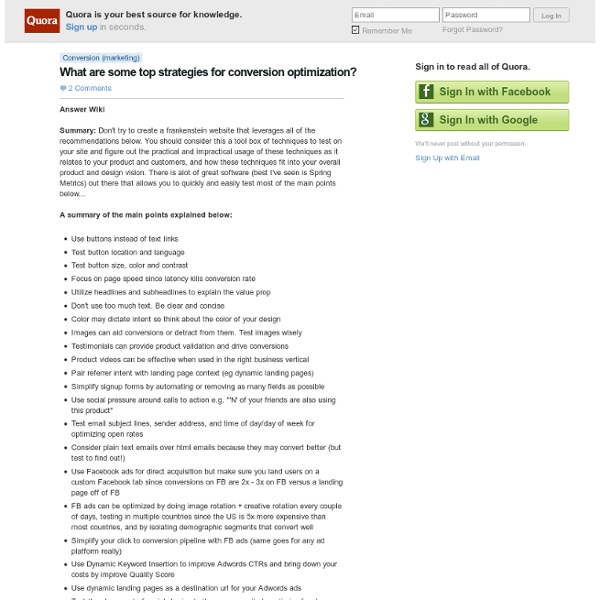 Your Facebook Account has Three Passwords What Do The Best Website Pricing Pages Look Like? With so much attention spent on landing pages, it can be easy to forget about one of your most important pages – the pricing page! It’s not just your pricing strategy that matters, but also the design of the page. In this article I’ll go over some of the keys to a good pricing page. There’s not a one size fits all approach, so it’s important to test and see what works best for you. Highlighting One Option Go on almost any pricing page and you’ll see an option (usually in the middle or end) that highlights the most popular plan. Roughly five years ago, a case study was presented that showed: By highlighting the profit maximizing plan on your pricing page, you would attract more visitor click-throughs and therefore generate more revenue.If you “snuck” your most profitable plan in the middle of your pricing page, visitors would most likely pick the middle option because that’s where they generally click, on average. So where’s the link to this case study? Here’s what you should be doing:

How Facebook Will Fix Its Like Button Problem You can't deny the success of Facebook's Like button. Its popularity quickly skyrocketed; it took less than a month for the button to appear on more than 100,000 websites. Now it is a standard method for endorsing something on the social web. But that's exactly the problem — the Like button is an endorsement. The company did some internal research and found that users, especially younger ones, were afraid to "Like" because of the implied endorsement. Facebook's bet is that more people will click a button that says they've "Listened" to a song or "Watched" a video, rather than simply liking it. Called Gestures, these actions are the next step in integrating Facebook with every part of the web. It's Facebook's partners that will take this capability and turn it into applications that populate Facebook and their websites with these Gestures, though.

10 UI Ideas to Learn from Gumroad) 10 UI Ideas to Learn from Gumroad Gumroad is an exciting new startup that lets anyone sell digital content with just a link. It was founded by the prolific Sahil Lavingia. Sahil has designed a number of useful apps, ranging from Pinterest in the early days, to Turntable, to Crate, to Caltrainer, etc. This is how the Gumroad home page looks, un-dissected. And here is the dissected version, with the 10 things we’ll learn - Let’s get started - 1. This top bar has become increasingly common. When we visit sites, a split second is used to subconsciously say “Oh, these are the colors we’re using here. Note that Sahil has picked energetic colors. 2. A lot of logos have very little to do with the name or product of a company. But others have plenty to do with the name of the company/product. Until you have a brand and you own blue birds the way that Twitter does, ensuring your logo and the favicon are as good as possible at reminding a user of your company name is key. 3. 4. 5. 6. 7. 8. 9. 10.

The Shocking Truth About How Web Graphics Affect Conversions Does this situation feel familiar? — Your web designer reckons your site is outdated. It makes you look amateurish. If we’re being honest, we might even say it’s downright ugly and you should be ashamed of attaching it to your brand. The solution? A redesign, of course. It’ll have snazzy vector paths, cute cartoon scenes, jQuery carousels, full-page high-resolution background photos, the works. Why? Well, check out the reasons! 1. 2. 3. 4. 5. Wrong, wrong, wrong! Many years ago, advertising legend David Ogilvy commissioned research into the use of images. What he discovered from testing various kinds and placements of images was quite different to the popular opinion of designers—then and now: Images can reduce readership. Yes, they catch people’s attention. You might be wondering why you should care about research done in offline advertising. What Ogilvy Discovered Here are four principles Ogilvy’s research turned up. Of course, they are just best practices—a sensible place to start. 1. 2. 3.

13 Must See Lead Generation Examples You Need…To Grow Your List | This weekend I was trying to find a post about good examples of lead capturing , but I couldn’t find anything useful…I saw the opportunity and this is the result. I spent all Sunday looking for websites that I believed did a good job at using an email list form and applied well known practices in marketing. On all of the examples I marked the persuasion tactics most commonly used that you can apply to your business or blog/website. A lot of the content on this post is easy to apply but I learned this weekend even some well known websites fail to use them. If you’re using a good email service provider integrating an email sign-up form should be a walk-in-the-park. Now I understand if your goal is NOT to capture people’s email and build a relationship with your list then these examples might not be useful for you. Social Triggers Viperchill Social Media Examiner Smart Passive Income SlideDeck I Will Teach You To Be Rich Kissmetrics DIYthemes Dan Zarrella Copyblogger Big Brand System

Why most UX is shite I was invited to speak at the event this week where getting a little sweary and ranty is kind of encouraged (it goes well with the craft beer consumption that is an integral part of the conference mix). This was my contribution. Slides: When I checked the agenda to see what I was supposed to be talking about at Monkigras, I saw that I was down to talk for 15 mins about ‘Crafting Good UX’. Where to start. An elegant UIBeing AddictiveA Fast Startbeing Seamless, andIt Changes You I hate these kinds of lists. If only that were true, we’d be overwhelmed by UX amazingness. It’s not that simple right. Now, there are plenty of ways you can make a user’s experience of your product rubbish, but in my experience, there are a handful of serial offenders. 1. So, this one I see ALL the time. From a start up who doesn’t want to rule anything out of its value proposition so doesn’t really know what it is so, as a consequence, no one knows what problems it’s solving so they don’t engage. 2. 3. 4.

Click Through Rate Increased 30 Percent With Rel Author Tag | SEObodybuilder Online Marketing One week after implementing Google authorship markup my bodybuilding blog’s click-through rate increased 38 percent! The Rel=Author tag was placed on all my blog posts but not all of them got the rich snippet next to their Google SERPs. Illustrated on the right is a single article on the first page of Google for an undisclosed keyword. Now for all of you analytical SEO’s and Marketing Managers. Click Through Rate Increases Blue line – Week of authorship markup Orange line - 7 weeks before authorship markup Week1 Week2 Week3 Week4 Week5 Week6 Week7 Before Rel=Author Average of 39.14 unique visitors/week for 7 weeks. After Rel=Author 63 unique visitors or an increase of 38 percent. Author Stats in Google Webmaster Reports Google webmaster tools has a two day lag in reporting compared to live time, so it’s not in sync with the rest of my report. Implementing the rel=author tag on your website After implementing the rel=author tag I can’t grantee your blog or website will get better search rankings.

Dim Sum Warriors: Comic Book Snacks that Talk Back in Two Languages The other day, I was in Chinatown in New York City, eating dim sum with Yen Yen Woo and Colin Goh. They’re a married couple, transplants from Singapore. For reasons that’ll soon become clear, I couldn’t help imagining that those little Chinese snacks we were eating were…alive. Here’s a taste of Goh and Woo’s creation, Dim Sum Warriors: “Their bravery and skill have inspired millions worldwide, while the mere mention of their names causes enemies to quiver like tofu.” Dim Sum Warriors is a comic book that started as an iPad app. Goh and Woo created Dim Sum Warriors partly for their daughter, Kai Yen Goh. “We felt especially because we were bringing up a daughter in America we wanted something that would represent her mixed-up cultural heritage,” says Goh. On an iPad, you can read Dim Sum Warriors in English or in Chinese. Nick Sousanis is a big fan of Dim Sum Warriors. “If you read the New York Times on the web and you want to know what a word means, you click on it,” says Sousanis.