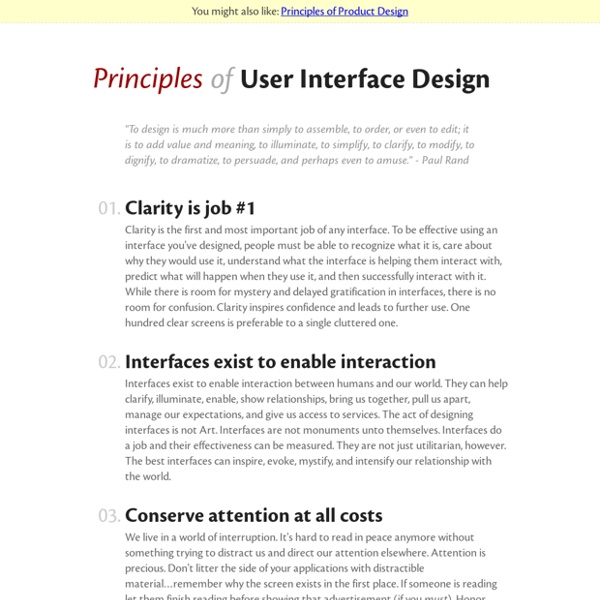 Clarity is job #1 Clarity is the first and most important job of any interface. To be effective using an interface you've designed, people must be able to recognize what it is, care about why they would use it, understand what the interface is helping them interact with, predict what will happen when they use it, and then successfully interact with it. While there is room for mystery and delayed gratification in interfaces, there is no room for confusion. Clarity inspires confidence and leads to further use. One hundred clear screens is preferable to a single cluttered one. Related:  Game Design Theory: Play Mechanics

Feedback Loops in Game Design [Infographic] FEEDBACK LOOPS IN GAME DESIGN as observed by Jesse Catron, Jay Barnson, Kyoryu Design: Daniel Solis (danielsolis.com) In a feedback loop, the output affects the input. POSITIVE FEEDBACK AMPLIFIES the output and tends to destabilize the system. For example, the runaway leader. One player takes an early insurmountable lead. In Settlers of Catan, the player with the most productive settlements will generate the most resources, which enables him to build more settlements and gain even more resources. NEGATIVE FEEDBACK DIMINISHES the output and tends to stabilize the system. In Settlers of Catan, players are less likely to accept trades with the leading player. Balancing feedback loops is an important skill for all game designers. [ + ] You can use low value “copper” cards to buy higher value “silver” and “gold” cards, thus leading to greater and greater amounts of buying power later in the game. [ + ] Once a driver takes an early lead, they can shift to high gear to increase speed.

10 User Interface Design Fundamentals It’s no great mystery that truly great user interfaces are the ones that are engineered to stay out of the way. Free trial on Treehouse: Do you want to learn more about web design? Click here to try a free 14-day trial on Treehouse. ‘Staying out of the way’ means not distracting your users. Check out our other design courses at Treehouse. When getting started on a new interface, make sure to remember these fundamentals: 1. “Obsess over customers: when given the choice between obsessing over competitors or customers, always obsess over customers. Your user’s goals are your goals, so learn them. 2. Users spend the majority of their time on interfaces other than your own (Facebook, MySpace, Blogger, Bank of America, school/university, news websites, etc). CoTweet uses a familiar UI pattern found in email applications. 3. “The more users’ expectations prove right, the more they will feel in control of the system and the more they will like it.” – Jakob Nielson Your users need consistency. 4. 5.

Bokardo - Interface Design & UX by Joshua Porter Make a better game: Limit the player [In this piece reprinted with permission from Stardock producer Jon Shafer's blog, the former Civilization lead designer explains the benefits of keeping limits in your game, pulling examples from his own design decisions with Firaxis' strategy series.] Okay, okay, I know what you're saying. "Limiting the player makes a better game? Are you crazy? Games should have fewer limits, not more!" Players should always feel like they have options -- but having limitless options is definitely not a good thing. You go to the grocery store because a friend asked you to pick up some flour for a recipe. Your next destination is a much more typical grocery store, and this time around you find but three different kinds of flour: all-purpose, bread and cake. While this story is a bit silly, the obvious lesson is that contrary to what you'd expect, presenting someone with a huge number of options does not give them more 'freedom' -- in fact all it does is overwhelm them.

20 Mobile User Interface Design for Your Inspiration Designers of mobile interfaces are becoming more prominent in today’s faced-paced web space. While mobile-optimized sites may lighten the burden on a site developer, some prefer building a full featured app instead. App designers and developers are in high demand now particularly in user interface. UI design focuses on user experience and interaction, and while being easy-to-use is important, an attractive yet still practical design is essential to the success of an app. Today I’d like to show you some mockups, sketches, buttons, tables, splash screens, and many more examples of iPhone app (UI) designs for your inspiration. If you’re familiar with iPhone or iPad designing, you’ll recognize all these terms above. Recommended Reading: Design Killer Mobile App Websites: Tips And Examples 1. iOS 7 UI Components by GraphicBurger 2. 3. 4. 5. 6. iOS7 inspired UI kit by Kreativa Studio 7. iPhone Chat App by Ramotion 8. 9. 10. 11. iOS UI DESIGN by Bhaktisudha Naithani 12. 13. 14. 15. 16. 17. 18. 19.

Step by Step UI Design eBook In this eBook, I’ll take you through my process for designing Kandan (an open source chat app) from start to finish. I’ll explain every iteration (including mistakes and wrong turns), and you’ll learn the reasons behind every design choice. It‘s just like watching over my shoulder while I work, except without having to listen to Lil’ Wayne! Note: Kandan itself is not out yet, but you can sign up to know when it's ready! What's Inside? 20 steps that take you from blank canvas to rich web app 11 design principles that you can apply to your own project 38 PNG screenshots for every intermediary step Illustrated examples from other apps and sites [Deluxe Edition] A well-organized PSD with all the elements What's not inside: anything about HTML/CSS implementation Read a sample chapter

Card Design Commandments | Hyperbole Games Post by: Grant Rodiek I have a thing for card games. I like playing them and I like designing them. Every time I try to veer away from cards to tackle another component like dice, I always end up right back with a box full of index cards and penciled scribbles. As I design card games, play card games, and give advice to other designers about their card games, I see a few patterns emerging. Text should be easy to read: Two smart individuals, Chris Farrell and Daniel Solis, have already written about this (and many topics in this post) at length. Bottom line, it should be incredibly easy for people of all ages to read the text on your cards. Use icons where possible: If you’re using a term or rule often, create an icon. Good iconography saves space on cards and immediately gives the player an idea of the card’s purpose at a glance. Sample Poor Abby proto card Sample icons I made for my prototype That’s a great amount of information to process, but luckily this is an advanced card.

Stop designing for screen width, design for content 320, 768 and 1024. Do these numbers mean anything to you? No, it’s not the Da Vinci code, they are the widths in pixels that many designers associate with mobile, tablet and desktop screen widths. The problem I have with this is that my mobile isn’t 320 pixels wide, my tablet isn’t 768 pixels wide and my desktop screen certainly isn’t 1024 pixels wide. What happens to all those screen sizes in between? I have seen many sites that use these three breakpoints for their designs and simply create 3 static layouts that centre within the nearest width. This is better than having an old fashioned, static, desktop only site as they are at least serving a one column, simplified version for mobile and a touch friendly version for tablet but then why would you alienate all other screen sizes by not taking them into consideration? Sure the design will still work on the other sizes but what happens when you have a tablet that is smaller than 768? It’s about percentages not pixels Content is king

Features - Psychology is Fun [In this thought-provoking piece, psychology researcher and author Clark takes a look at how psychology and can must be applied to game development, to produce works that engage audiences -- offering up concrete examples of the right techniques.] Gaming's core is fun, and psychology is fun's touchstone. This article restricts itself to psychology's most foundational, most immediately-applicable methods for crafting sticky, captivating experiences. From behaviorism's methods for structuring overpowering rewards, to motivational theories on generating wants and needs, to hybrid theories like flow, it is no longer fiscally responsible for games companies to shun psychology. Pleasure first, and then, excuse from pain, shape every move that we will ever make -- so say the behaviorists. Whether we know it or not, whether we like it or not, behavior is shaped by reward. Operant conditioning, often associated with Edward Thorndike, then B.F. Not all rewards are created equal.