The Rise and Fall of Jim Crow. Jim Crow Stories 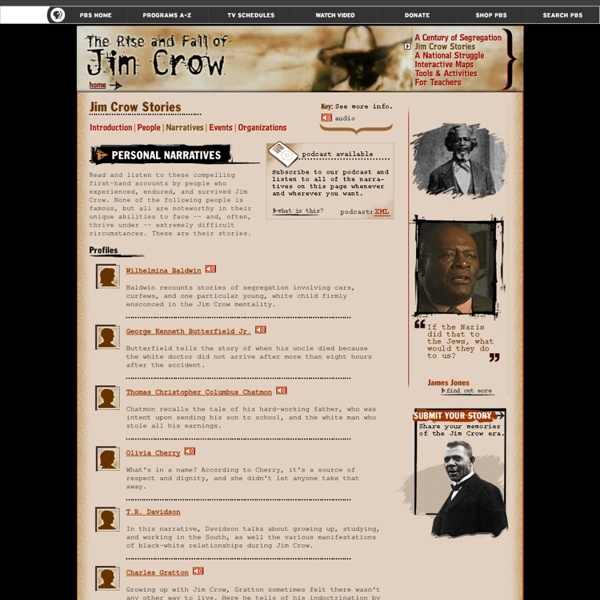 Related:  To Kill a Mockingbird Bird • 'I know why the caged bird sings'

Rosa Parks 1913-2005: We Air a Rare 1956 Interview with Parks During the Montgomery Bus Boycott It was 50 years ago this December that Rosa Parks refused to relinquish her seat to a white man aboard a city bus in Montgomery, Alabama. She was arrested and convicted of violating the state’s segregation laws. Her act of resistance led to a 13-month boycott of the Montgomery bus system that would spark the civil rights movement. And it would inspire freedom struggles abroad including in South Africa. The bus boycott would also help transform a 26-year-old preacher named Martin Luther King Junior to national prominence. Rosa Parks’ arrest came just months after the lynching of Emmett Till. At the time of her arrest, Parks was a 43-year-old seamstress and a seasoned civil rights activist. After the successful bus boycott Parks would continue to take part in the civil rights movement in this country. We go back to 1956 in the midst of the Montgomery Bus Boycott to one of the earliest preserved interviews with Rosa Parks. This is a rush transcript. Show Full Transcript ›

Jim Crow Museum: Origins of Jim Crow Jim Crow was the name of the racial caste system which operated primarily, but not exclusively in southern and border states, between 1877 and the mid-1960s. Jim Crow was more than a series of rigid anti-black laws. It was a way of life. Under Jim Crow, African Americans were relegated to the status of second class citizens. The Jim Crow system was undergirded by the following beliefs or rationalizations: whites were superior to blacks in all important ways, including but not limited to intelligence, morality, and civilized behavior; sexual relations between blacks and whites would produce a mongrel race which would destroy America; treating blacks as equals would encourage interracial sexual unions; any activity which suggested social equality encouraged interracial sexual relations; if necessary, violence must be used to keep blacks at the bottom of the racial hierarchy. A black male could not offer his hand (to shake hands) with a white male because it implied being socially equal.

Jim Crow Laws - Separate Is Not Equal “Marriages are void when one party is a white person and the other is possessed of one-eighth or more negro, Japanese, or Chinese blood.” —Nebraska, 1911 “Separate free schools shall be established for the education of children of African descent; and it shall be unlawful for any colored child to attend any white school, or any white child to attend a colored school.” —Missouri, 1929 “All railroads carrying passengers in the state (other than street railroads) shall provide equal but separate accommodations for the white and colored races, by providing two or more passenger cars for each passenger train, or by dividing the cars by a partition, so as to secure separate accommodations.” —Tennessee, 1891 See more Jim Crow laws Restricted real-estate covenant In communities across the country, property owners signed agreements called restrictive covenants.

The Grapes of Wrath <div style="padding:5px; font-size:80%; width:300px; background-color:white; margin-left:auto; margin-right:auto; border:1px dashed gray;"> Internet Archive's<!--'--> in-browser audio player requires JavaScript to be enabled. It appears your browser does not have it turned on. Please see your browser settings for this feature. The Grapes of Wrath This audio is part of the collection: Community AudioIt also belongs to collection: Artist/Composer: Keywords: The Grapes of Wrath Creative Commons license: Attribution 3.0 Individual Files Be the first to write a review Downloaded 2,296 times Reviews

Hard Time: From Alabama’s Past, Capitalism and Racism In a Cruel Partnership | Slavery By Another Name July 16, 2001 — Till 1928, Companies ‘Leased’ Convicts, Most of Them Black and Many Doomed — Sent to the Mines for ‘Gaming’ — The Wall Street Journal By Douglas A. Blackmon BIRMINGHAM, Ala. — On March 30, 1908, Green Cottenham was arrested by the Shelby County, Ala., sheriff and charged with vagrancy. After three days in the county jail, the 22-year-old African-American was sentenced to an unspecified term of hard labor. The next day, he was handed over to a unit of U.S. Steel Corp. and put to work with hundreds of other convicts in the notorious Pratt Mines complex on the outskirts of Birmingham. Born two decades after the end of slavery in America, Green Cottenham died a slave in all but name. In the early decades of the 20th century, tens of thousands of convicts — most of them, like Mr. ‘Assault With a Stick’ Most of the convicts were charged with minor offenses or violations of "Black Code" statutes passed to reassert white control in the aftermath of the Civil War. U.S. When Mr.

Examples of Jim Crow Laws "It shall be unlawful for a negro and white person to play together or in company with each other at any game of pool or billiards." This selection is an example of a Jim Crow law that was effective in the state of Alabama from the late 19th century to the early 20th century. Jim Crow laws functioned to keep black and white people separated, particularly in social settings and social institutions such as marriage. More Jim Crow Laws These hateful laws worked to enforce segregation amongst the races, which ultimately led to civil rights actions starting in the 1950s, led by individuals such as Martin Luther King Jr. and Rosa Parks. Examples of laws that caused these extreme tensions in the country included the following: Marriage - "All marriages between a white person and a negro, or between a white person and a person of negro descent to the fourth generation inclusive, are hereby forever prohibited." Reasons for Jim Crow

Oxford Biographies by Oxford University Press Ku Klux Klan In 1915, white Protestant nativists organized a revival of the Ku Klux Klan near Atlanta, Georgia, inspired by their romantic view of the Old South as well as Thomas Dixon’s 1905 book “The Clansman” and D.W. Griffith’s 1915 film “Birth of a Nation.” This second generation of the Klan was not only anti-black but also took a stand against Roman Catholics, Jews, foreigners and organized labor. The Great Depression in the 1930s depleted the Klan’s membership ranks, and the organization temporarily disbanded in 1944.

Jim Crow Laws - Martin Luther King Jr National Historic Site From the 1880s into the 1960s, a majority of American states enforced segregation through "Jim Crow" laws (so called after a black character in minstrel shows). From Delaware to California, and from North Dakota to Texas, many states (and cities, too) could impose legal punishments on people for consorting with members of another race. The most common types of laws forbade intermarriage and ordered business owners and public institutions to keep their black and white clientele separated. Here is a sampling of laws from various states. Nurses: No person or corporation shall require any white female nurse to nurse in wards or rooms in hospitals, either public or private, in which negro men are placed. Buses: All passenger stations in this state operated by any motor transportation company shall have separate waiting rooms or space and separate ticket windows for the white and colored races. Intermarriage: It shall be unlawful for a white person to marry anyone except a white person.

P!nk & Nate Ruess (Fun) - Just Give Me A Reason Complete the lyrics as fast as possible by typing the characters of the missing words. The number of gaps depends on the selected game mode. The video will stops till the words of the line are filled up correctly. In the meantime, your life bar will decrease. To listen to a line again, press the button or the "backspace" key. To skip the words you don't understand, press the button or the "tab" key. Be aware: both things are penalized with some life! When you complete a word, you get as many points as characters in the word multiplied by your current bonus indicator. You'll also recover life and increase your bonus indicator. If you make mistakes, you'll lose life and your bonus indicator will decrease. By completing all the lyrics, you'll get extra points for the life you have left.

Race relations between the wars

Related:
Related:  To Kill a Mockingbird Bird   -  'I know why the caged bird sings'