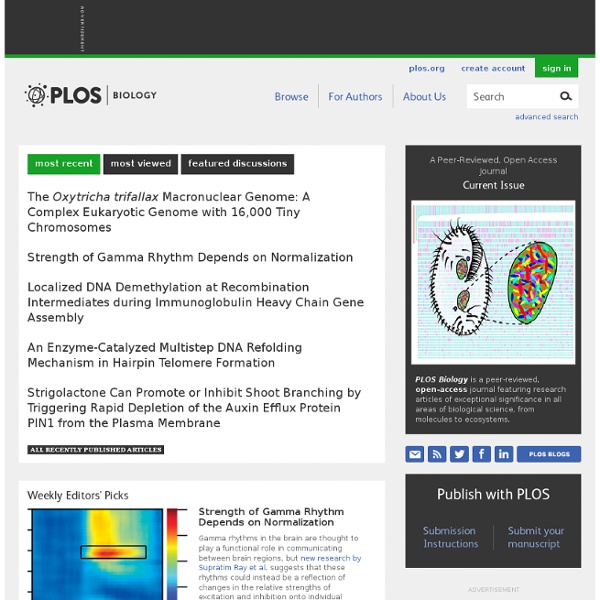 Public Library of Science: Open Access The Case for Open Access Open Access (OA) stands for unrestricted access and unrestricted reuse. Here’s why that matters. Most publishers own the rights to the articles in their journals. Anyone who wants to read the articles must pay to access them. Anyone who wants to use the articles in any way must obtain permission from the publisher and is often required to pay an additional fee. Although many researchers can access the journals they need via their institution and think that their access is free, in reality it is not. Paying for access to content makes sense in the world of print publishing, where providing content to each new reader requires the production of an additional copy, but online it makes much less sense to charge for content when it is possible to provide access to all readers anywhere in the world. PLOS Takes a Different Approach PLOS applies the Creative Commons Attribution (CC BY) license to works we publish. Benefits of Open Access Research Accelerated discovery.

Scientists observe single gene activity in living cells in detail for first time Researchers at Albert Einstein College of Medicine of Yeshiva University have for the first time observed the activity of a single gene in living cells. In an unprecedented study, published in the April 22 online edition of Science, Einstein scientists were able to follow, in real time, the process of gene transcription, which occurs when a gene converts its DNA information into molecules of messenger RNA (mRNA) that go on to make the protein coded by the gene. Robert Singer, Ph.D., co-director of the Gruss Lipper Biophotonics Center at Einstein and professor and co-chair of anatomy and structural biology, is senior author of the paper. The study's lead author is Daniel Larson, Ph.D., previously a member of Dr. Using florescent proteins, the researchers were able to follow mRNA activity by inserting DNA sequences into a gene in live yeast cells. This research was funded by the National Institutes of Health and the National Institute of General Medical Sciences.

Oxford Journals | Life Sciences | Systematic Biology Nutrition & Metabolism DAVID: Gene Functional Classification What does this tool do? Quickly translate given gene IDs to corresponding gene names in a batch way Provide links for each genes to DAVID Gene Report for in-depth information Search functionally related genes within user's input gene list or genome Key Concepts of "Search Related Genes" Any given gene is associating with a set of annotation terms. If genes share similar set of those terms (annotation profile), they are most likely involved in similar biological mechanisms. Find Related Genes Tool is very different and complementary to the common gene clustering methods, such as homologous genes based on sequence similarity; protein families based on one common biological activity.

New journal “Nature ONE” launched today It’s very unusual for me to post two blog posts in a single day, and even more so when both posts are based on press releases by the same organization. But this is important news for everybody interested in scholarly publishing. In a press release earlier today, the Nature Publishing Group announced a new journal that is covering biology, chemistry, earth sciences and physics,is an open access journal, giving the authors the choice of two Creative Commons non-commercial licenses,will publish all papers that are judged to be technically valid and original, anduses article-level metrics to put the emphasis on the individual article rather than the journal as a whole. The new journal is called Scientific Reports, and obviously resembles PLoS ONE in many ways, down to the article-processing charges which are $1350 for both journals (but will go up to $1700 for Scientific Reports in 2012). The launch of Scientific Reports is a good sign that PLoS ONE is doing something right.

How Water Shapes DNA Water molecules surround the genetic material DNA in a very specific way. Scientists at the Helmholtz-Zentrum Dresden-Rossendorf (HZDR) have discovered that, on the one hand, the texture of this hydration shell depends on the water content and, on the other hand, actually influences the structure of the genetic substance itself. These findings are not only important in understanding the biological function of DNA; they could also be used for the construction of new DNA-based materials. The DNA's double helix never occurs in isolation; instead, its entire surface is always covered by water molecules which attach themselves with the help of hydrogen bonds. "We've been able to verify that some of the water is bound stronger whereas other molecules are less so," notes Dr. Analyses of the genetic material were conducted at the HZDR by the doctoral candidate Hassan Khesbak. Oscillations of the water bonds in the hydration shell of the double helix can be excited by infrared light.

All Non-Africans Part Neanderthal, Genetics Confirm If your heritage is non-African, you are part Neanderthal, according to a new study in the July issue of Molecular Biology and Evolution. Discovery News has been reporting on human/Neanderthal interbreeding for some time now, so this latest research confirms earlier findings. Damian Labuda of the University of Montreal's Department of Pediatrics and the CHU Sainte-Justine Research Center conducted the study with his colleagues. "This confirms recent findings suggesting that the two populations interbred," Labuda was quoted as saying in a press release. The ancestors of Neanderthals left Africa about 400,000 to 800,000 years ago. Neanderthals possessed the gene for language and had sophisticated music, art and tool craftsmanship skills, so they must have not been all that unattractive to modern humans at the time. This work goes back to nearly a decade ago, when Labuda and his colleagues identified a piece of DNA, called a haplotype, in the human X chromosome that seemed different.