This is a Japanese drum line! 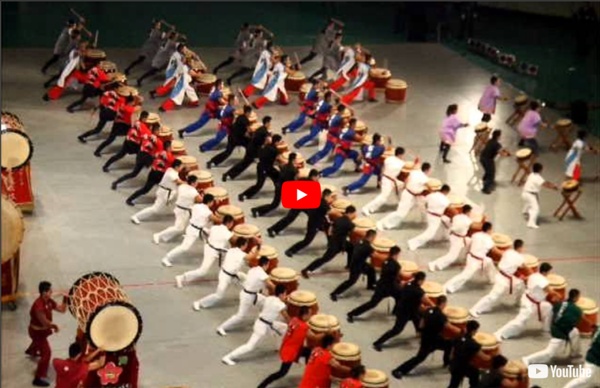 Japan train departs 25 seconds early, company apologises for 'truly inexcusable' mistake, East Asia News & Top Stories - The Straits Times A Japanese railway company has apologised after one of its train departed 25 seconds early, a mistake which it told commuters was "truly inexcusable". West Japan Railways (JR West) last Friday (May 11) issued a statement after a train at Notogawa Station in Shiga Prefecture, which was running on the Biwako Line, mistakenly left the platform at 7.11.35am, reported Japanese website SoraNews24. This meant that the train was 25 seconds too early from its scheduled departure time of 7.12am. "The great inconvenience we placed upon our customers was truly inexcusable," JR West said in its statement.

Electromechanical instruments + rocks: Rock Band How to make homemade slide whistles Bamboo, PVC pipe, wood, or even a carrot! Slide whistles can be made from all sorts of materials, and are fun to make, play, and learn physics with. In this episode of Homemade Science, teacher Bruce Yeany shares his ... The Glass Armonica, Benjamin Franklin’s 1761 invention Japan to end tourists' toilet trouble with standardised buttons Navigating the array of buttons on Japan’s high-tech toilets can be a disconcerting experience for the uninitiated, who, expecting to hear a familiar flushing sound, are instead subjected to a sudden, and unwanted, cleansing of the nether regions. As Japan prepares for an influx of overseas visitors during the 2019 rugby World Cup and the Tokyo Olympics the following year, the country’s sanitation industry has agreed to standardise pictograms on toilets so users know for certain if they are about to receive a blast of warm air or a jet of water. Nine manufacturers belonging to the Japan sanitary equipment industry association will soon start using the same eight symbols to explain the buttons found on their state-of-the-art WCs. At a launch event this week, the firms said they had agreed to simplify the pictography in response to complaints from tourists that they are confused by symbols that differ depending on the make of toilet. … we have a small favour to ask.

Figures From Famous Paintings Invade Modern Day Settings click2x The Canvas Project is a project created by Brazilian artist Gabriel Nardelli Araújo. The 28-year-old 'frees' well-known characters from classical paintings and puts them in the modern day context with the help of Photoshop. "The process is entirely digital, my works do not exist, at least so far, in physical form. It is done in Photoshop based on photos of places I visited and pictures that I had access to. Other pictures are made available online by the museums themselves in high-resolution files, which has greatly helped in the final quality of the images," he explained in an interview. Show Full Text

'Mini-storytellers': Japanese children pass on horror of Nagasaki bombings The 500 students at Shiroyama Elementary School gather in the assembly hall on the ninth day of every month to sing a song. This is no ordinary school anthem, however. Dear Children’s Souls deals with the most traumatic chapter in the school’s long history: the moment 1,400 students and 28 staff members died when the United States dropped an atomic bomb on the southern Japanese city of Nagasaki in the closing stages of the second world war. Nearly 73 years have passed since the bombing of Nagasaki on 9 August 1945 – and Hiroshima three days earlier – but the school feels a special responsibility to keep the memories alive. “Shiroyama Elementary School is situated closest to the ground zero of the A-bombing compared to other municipal elementary schools in Nagasaki,” explains the softly spoken principal, Hiroaki Takemura, adding that the hypo-centre was just 500m away.

Bridges over the Chicago River GIF Bridges over the Chicago River By Slim Jones 27,671 Total Views More details Japan's first woman fighter pilot to blaze a trail in skies Image copyright AFP/Getty A Japanese woman will be flying through the glass ceiling as she becomes her country's first female fighter pilot. First Lieutenant Misa Matsushima, 26, will begin duty on Friday having completed her training to fly F-15s, Japan's military has announced.

Star Wars: Episode III, redubbed using the English subtitles from a pirated Chinese edition / Boing Boing This is apparently a Chinese pirated edition of Star Wars: Episode III, but dubbed using the English subtitles offered on that disc. It's amazing, not least because the voice actors are so good I thought for a moment it might have been a TV segment with Ewan, Hayden, Samuel and co. [via]