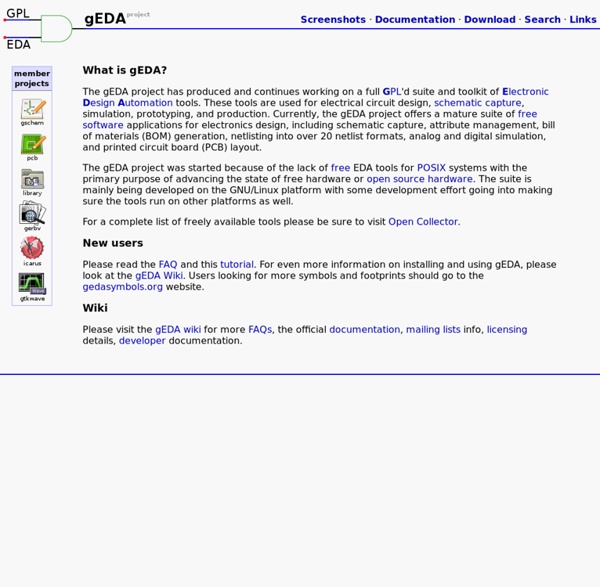 Circuit Design on Your Linux Box Using gEDA A lot of attention—and hype—has focused on bringing traditional office-productivity programs, such as the OpenOffice.org suite, to Linux. However, another important—and far less-hyped—area where Linux's desktop abilities come to the fore is in engineering software, and in particular, CAD (computer-aided design). Non-engineers tend to think of the term CAD as referring to mechanical design software, and they are partially right. We are used to seeing complicated drawings of mechanical assemblies appearing on computer screens in advertising and television. However, CAD doesn't mean only mechanical design. Electronics designers also long have used computer-based design tools to help them perform their design tasks. The area of CAD software used for electronics design is typically referred to as EDA, short for electronic design automation. Designing circuits using EDA tools is analogous to creating software using traditional software engineering tools. Origins and History of gEDA

How to Install and Setup EAGLE Favorited Favorite 9 Introduction Printed circuit boards (PCBs) are the backbone of every electronic gizmo out there. We LOVE designing PCBs here at SparkFun. This first tutorial goes over how to install the software, and tailor-fit its interface and support files. Why EAGLE? EAGLE is one of many PCB CAD softwares out there. Cross-platform – EAGLE can run on anything: Windows, Mac, even Linux. Of course, EAGLE has its drawbacks too. Recommended Reading Here are a few tutorial and concepts you may want to familiarize yourself with before dropping down into this rabbit hole: Download, Install, Run EAGLE is available on Cadsoft’s (the developer company) download page. EAGLE installs just like any old program, it’ll self extract and then present you with a series of dialogs to configure the installation. Licensing EAGLE On the last screen of the installation process, you should be presented with a window like this: One of our favorite things about EAGLE is that it can be used for free!

PCB Home Page pcb is free software for designing printed circuit board layouts. It has many features and is capable of professional-quality output. It is available for UN*X operating systems, e.g., GNU/Linux, Mac OS-X, or Cygwin under Windows. pcb was orignally written by Thomas Nau of the University of Ulm, Germany, and is now maintained by harry eaton of the Johns Hopkins University Applied Physics Laboratory, Laurel, Maryland, USA.

Fritzing geda:gsch2pcb_tutorial [gEDA Project Wiki] Translations of this page are also available in the following languages: Русский. This is a tutorial on the process of using gsch2pcb as an interface between gschem and PCB. It assumes the gEDA, PCB and gsch2pcb packages are already installed and ready to use. Starting with gEDA 20030901, gsch2pcb is packaged with gEDA and doesn't need to be separately installed. This tutorial is functional and intended to generate results as quickly as possible. The goal is to use gsch2pcb as the bridge between gschem and PCB so that the schematics can always be in sync with the PCB layout because all element additions or deletions in the layout will automatically be driven by changes in the schematics. See the release notes for the history of this tutorial. Terminology With gschem, you add symbols representing electronic components to a schematic. The schematic footprint attribute value of a symbol is the name of the PCB element to be placed on the layout for that instance of the symbol. Setup to:

Recommendations for Practical Analog Electronics Books Perhaps the easiest introductions to electronics that you can find is the free e-book Lessons In Electric Circuits (allaboutcircuits) by Kuphaldt. It assumes no prior knowledge of electronics, physics or mathematics and explains everything in a very gentle way. IMPORTANT NOTE: If you are new to electronics and you want to build your own circuits (or modify or just take measurements in circuits that others have built), you should first familiarize yourself with the basic safety measures. A very good introduction to such measures is the chapter Electrical Safety in Kuphaldt's book. I strongly recommend that you study it very carefully before you start working. If you prefer videos, you can find a nice introduction to electronics in the Video Lectures by Fiegenbaum. Some of the Electronics Tutorial Videos by Afrotech are mainly for the hobbyist. An interesting page is Williamson Labs by Glen Williamson. A very readable book is Practical Electronics for Inventors by Scherz.

Circuit Idea - Wikibooks, open books for an open world <<< bottom - discussion - new story - philosophy - contribution - book stage Revealing the Ideas behind Circuits Welcome to Circuit Idea! This novel electronics wikibook is for the creative student, teacher, inventor, technician, hobbyist, and anyone who is not satisfied by formal circuit explanations. It is intended for people who really want to grasp the basic concepts of electronics by relying on their human imagination, intuition and emotions rather than on pure logic and reasoning. This book is part of a series on Electric Circuits: We treat electronic circuitry not only as a science, but also as an art. Great circuit ideas are "non-electrical"; they are not dependent on the specific implementation (tube, transistor, op-amp etc.). What is the idea behind the circuit? Following a novel building approach, the book presents every new more complex circuit based on the previous simpler one. Completed circuit stories[edit] Circuit stories under development[edit] Demystifying gyrator circuits

PCB Milling PCB Milling Release status: Concept One obvious goal of making a RepRap replicatable is getting it to make it's own PCBs or other electronic circuitries. PCB milling is one of the more promising ways of Automated Circuitry Making. Recent firmwares understand a pretty standard flavour of GCode, opening the door to a lot of toolpaths already existing. Researchers have already milled out functional PCBs on the WolfStrap. (Should these be moved to Useful Software Packages ?) While a gazillion of softwares for creating and manufacturing circuits and PCBs exists, it was surprisingly difficult to find a working combination. All applications described claim to run on all major OSs: Linux, Windows, Mac OS X. gEDA gEDA is a software suite with schematic and PCB layout editor. Installation on Linux You want at least gschem, pcb and xgsch2pcb. sudo apt-get install geda geda-utils geda-xgsch2pcb The version currently coming with Debian/Ubuntu by default is pretty old. ... or install from source: gerbv .

Which way does Electricity REALLY flow? Because the negative particles carry a name that sounds like "electricity," some beginners unfortunately start thinking that the electrons ARE the electricity, and they wrongly imagining that the protons (having a much less electrical name?) are not electrical. A few text and reference books even outright state this, saying that electricity is composed of electrons. Nope, wrong. Now everyone will rightly tell me that the protons within wires cannot flow, while the electrons can. However, solid metals are not the only conductors, and in many other substances the positive atoms *do* move, and they *do* participate in the electric current. Non-electron Charge-flow For example, if you were to poke your fingers into the back of an old-style television set, you would suffer a dangerous or lethal electric shock. So, inside human flesh ...which direction did the electric current REALLY go? Batteries are another example of non-electron or "ionic" conductors. Two-way currents are common