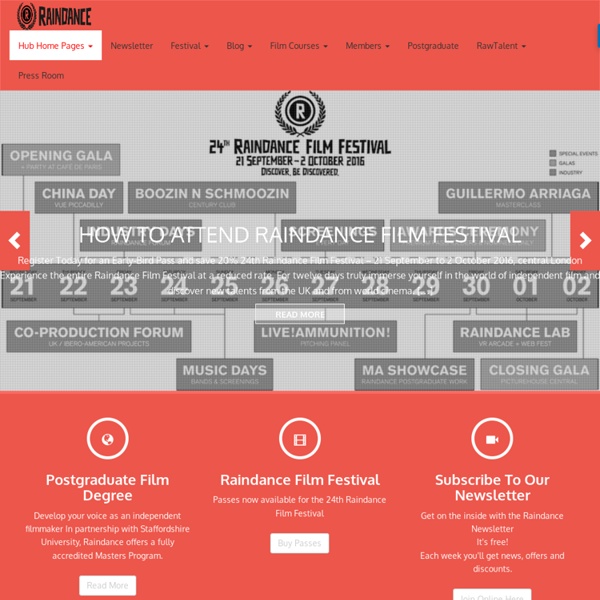 Film History of the 1920s End of the Silents - Upheavals in the Film Industry with the Early Talkies: As anticipated, the arrival of sound created great upheaval in the history of the motion picture industry, (as spoofed and exemplified in the film Singin' in the Rain (1952)). However, the transition from silent films to sound films wasn't completely calamitous or disruptive. In fact, every major Hollywood studio began to make two versions of their motion picture releases - in an orderly and rational fashion. In some cases, the plots of the two versions differed (with either alternative takes, reversed sequences, or changed endings). One major example was All Quiet on the Western Front (1930), which had a 'silent' version (with music and effects) and a 'sound' version.

A HISTORY OF MOVIE TRAILERS Movie trailers are everything. They're our first real impression of a film, not just in terms of the story or the actors, but also in terms of how a film will feel. We've all ended up seeing something we never thought we would, or have skipped something we thought we'd love simply based on the trailer. It's the movie equivalent of judging a book by its cover, only more thorough and at least comprised of the works' best bits.

University of Leeds Careers Centre Blog Want to get in to the Media industry? Terrified by the competitive nature of it? Take a look at these tips by Careers Consultant Venita Girvan and perhaps you’ll get ahead of the game! The Media sector is a large part of the UK and it is a popular form of communication that many of us rely on or use in our daily lives. BKSTS About The BKSTS was founded in London, England in 1931 to serve the growing film industry. As well as meetings, presentations, seminars, international exhibitions and conferences, BKSTS also organizes an extensive programme of training courses, lectures, workshops and special events. As craft skills and technology continually advance, the BKSTS provides its members with opportunities to remain current with the latest techniques through master classes. Close links are forged and maintained with other like-minded organizations throughout the world. The BKSTS publishes the unique Cinema Technology as a quarterly print journal. There is also an electronic news service, bringing you the latest information about all aspects of the Moving Image Industry

Introduction to Film Sound Though we might think of film as an essentially visual experience, we really cannot afford to underestimate the importance of film sound. A meaningful sound track is often as complicated as the image on the screen. The entire sound track is comprised of three essential ingredients: the human voice sound effects music These three tracks must be mixed and balanced so as to produce the necessary emphases which in turn create desired effects.

POETRY IN MOTION: MOVIE POSTERS COME TO LIFE Motion posters are all the rage these days, and the surest sign we are living in the future. Next stop, hologram marquees a la JAWS 19. But cool as they are, for my money they’re not near as cool as what video essayist whoispablo has done in his latest creation. What you got here are scores of iconic posters – ERASERHEAD, THE EXORCIST, LOST HIGHWAY, THE SHINING, DRIVE, E.T., 2001 etc. etc. – that have been animated to show you the scene the still on the poster is taken from. For example, in the classic E.T. poster, Eliot and his alien buddy ride their bike across the moon; in whoispablo’s version, we start on the moon and see the bike ride into position. It might sound simple, but it isn’t – not by a longshot – and the effect is spectacular.

Careers in the digital industry: Not just about the tech Think digital careers are just for ‘techy’ people? Think again. Digital now impacts on every area of life and is creating lots of opportunities in various roles across all sectors. This post is a summary of a careers event run by Amy & Lauren from Bubble Jobs at the University of Leeds in April 2015. What is the digital industry? Music and Music Production Careers Many music production graduates will want to use their degree subject in their work. However, due to the very limited number of openings, jobs in the creative industries can be difficult to obtain without determination and persistence. You need to get lots of (probably unpaid) work experience and to promote yourself. You have to be very single-minded. Major recording companies include EMI, Universal, Sony BMG and Sanctuary.

Film History of the 1920s Foundations of the Prolific Film Industry: Films really blossomed in the 1920s, expanding upon the foundations of film from earlier years. Most US film production at the start of the decade occurred in or near Hollywood on the West Coast, although some films were still being made in New Jersey and in Astoria on Long Island (Paramount). By the mid-20s, movies were big business (with a capital investment totaling over $2 billion) with some theatres offering double features. By the end of the decade, there were 20 Hollywood studios, and the demand for films was greater than ever. Most people are unaware that the greatest output of feature films in the US occurred in the 1920s and 1930s (averaging about 800 film releases in a year) - nowadays, it is remarkable when production exceeds 500 films in a year.

UNDERSTANDING ASPECT RATIO Film can be a quite insidious art form. There are lots of little subtle tricks going on under the main action and dialogue designed to make us feel certain ways, frame our minds in certain ways, and even expect certain things. Already this week we introduced you to a video essay on Scorsese's use of color, specifically red, to effect the emotional ambiance of a scene, but if you thought that was sneaky hold onto your hats because today we're talking about aspect ratio as a thematic device. We all basically know what aspect ratio is: how you see what you see. What we all may not know is that how you see what you see also effects how you feel about what you see, you see? Yeah, I'll admit this isn't my strongest area, anything with numbers that isn't a remote, I get pretty lost pretty quick.

How I got my job: Film Producer Jonny Paterson graduated with a degree in English Literature and History (Joint Honours) in 2010. He recently gave a great interview to Pam Stucky for Huffington Post about life as a Film Producer and how he got in. The interview is well worth a read if this is something you’re interested in and you can do so here. In addition to this, we also asked Jonny for his top tips for other students or graduates interested in film production. Here’s what he had to say:

Filmmakers Training & Courses Anyone can learn to be a filmmaker. Filmmaking is easy. Filmmaking is not rocket science. Everything about filmmaking is extremely easy to learn. 1920s Films – Early Production and The Introduction of Sound The 1920’s was a very notable era in film making primarily due to the transition from silent films to “talkies.” The technology of synchronized sound was introduced in 1927 with the film debut of “The Jazz Singer,” starring Al Jolsen, and the motion picture industry would never be the same again. Prior to the introduction of synchronized sound, movies were considered an art form that appealed to audiences worldwide.