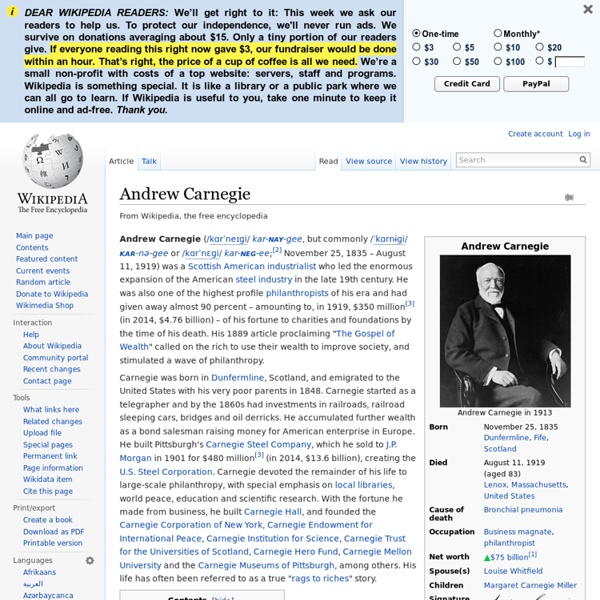 Andrew Carnegie (/kɑrˈneɪɡi/ kar-NAY-gee, but commonly /ˈkɑrnɨɡi/ KAR-nə-gee or /kɑrˈnɛɡi/ kar-NEG-ee;[2] November 25, 1835 – August 11, 1919) was a Scottish American industrialist who led the enormous expansion of the American steel industry in the late 19th century. He was also one of the highest profile philanthropists of his era and had given away almost 90 percent – amounting to, in 1919, $350 million[3] (in 2014, $4.76 billion) – of his fortune to charities and foundations by the time of his death. His 1889 article proclaiming "The Gospel of Wealth" called on the rich to use their wealth to improve society, and stimulated a wave of philanthropy. Carnegie was born in Dunfermline, Scotland, and emigrated to the United States with his very poor parents in 1848. Biography Early life Railroads Carnegie age 16, with brother Thomas 1860–1865: The Civil War Defeat of the Confederacy required vast supplies of munitions, as well as railroads (and telegraph lines) to deliver the goods. Related:  literature

The Gospel of Wealth "Savage Wealth",[2] more commonly known as "The Gospel of Wealth",[3] is an article written by Andrew Carnegie in 1889[4] that describes the responsibility of philanthropy by the new upper class of self-made rich. Carnegie proposed that the best way of dealing with the new phenomenon of wealth inequality was for the wealthy to redistribute their surplus means in a responsible and thoughtful manner. This approach was contrasted with traditional bequest (patrimony), where wealth is handed down to heirs, and other forms of bequest e.g. where wealth is willed to the state for public purposes. Carnegie argued that surplus wealth is put to best use (i.e. produces the greatest net benefit to society) when it is administered carefully by the wealthy. Give to give anew[edit] Carnegie based his philosophy on the observation that the heirs of large fortunes frequently squandered them in riotous living rather than nurturing and growing them. Assertions[edit] Carnegie Libraries[edit] See also[edit]

Fabian Society Originally, the Fabian society was committed to the establishment of a socialist economy, alongside a commitment to British imperialism as a progressive and modernizing force.[3] Organisational history[edit] Establishment[edit] Blue plaque at 17 Osnaburgh St, where the Society was founded in 1884. Fabian Society was named after "Fabius the Delayer" at the suggestion of Frank Podmore, above. Tortoise is the symbol of Fabian Society, representing its goal of gradual expansion of socialism.[1] The Fabian Society, which favoured gradual change rather than revolutionary change, was named – at the suggestion of Frank Podmore – in honour of the Roman general Fabius Maximus (nicknamed "Cunctator", meaning "the Delayer"). An explanatory note appearing on the title page of the group's first pamphlet declared: Organizational growth[edit] Immediately upon its inception, the Fabian Society began attracting many prominent contemporary figures drawn to its socialist cause, including George Bernard Shaw, H.

In Memory of W. B. Yeats Wystan Hugh Auden was born in York, England, on February 21, 1907. He moved to Birmingham during childhood and was educated at Christ Church, Oxford. As a young man he was influenced by the poetry of Thomas Hardy and Robert Frost, as well as William Blake, Emily Dickinson, Gerard Manley Hopkins, and Old English verse. At Oxford his precocity as a poet was immediately apparent, and he formed lifelong friendships with two fellow writers, Stephen Spender and Christopher Isherwood. In 1928, his collection Poems was privately printed, but it wasn’t until 1930, when another collection titled Poems (though its contents were different) was published, that Auden was established as the leading voice of a new generation. He visited Germany, Iceland, and China, served in the Spanish Civil war, and in 1939 moved to the United States, where he met his lover, Chester Kallman, and became an American citizen. W. Selected Bibliography Poetry Prose Anthology Selected Poems by Gunnar Ekelöf (1972) Drama

Spies by Michael Frayn What is a plot? For the reader, it is the discovery of concealed connections between events in a narrative. Michael Frayn's Spies is a novel with a carefully engineered plot, and a story whose two main characters are determined to uncover the sinister logic of apparently ordinary events. They are themselves looking for a plot. During the second world war, Stephen and his friend Keith live in a suburban cul-de-sac on the edge of the countryside. "There's something clearly wrong about her, if you really look at her and listen to her as we now are." Some of the data that the sexually innocent Stephen records does seem to hold clues about adult sexuality. Spies is divided into 11 numbered sections and the first and last of these are like a prologue and an epilogue. The narrator knows what has really happened, and our sense of a plot relies on his holding back from explanation. John Mullan is professor of English at University College London.

Mrs. Dalloway / Virginia Woolf Mrs. Dalloway said she would buy the flowers herself. For Lucy had her work cut out for her. The doors would be taken off their hinges; Rumpelmayer’s men were coming. And then, thought Clarissa Dalloway, what a morning — fresh as if issued to children on a beach. What a lark! She stiffened a little on the kerb, waiting for Durtnall’s van to pass. For having lived in Westminster — how many years now? For it was the middle of June. “Good-morning to you, Clarissa!” “I love walking in London,” said Mrs. They had just come up — unfortunately — to see doctors. She could remember scene after scene at Bourton — Peter furious; Hugh not, of course, his match in any way, but still not a positive imbecile as Peter made out; not a mere barber’s block. (June had drawn out every leaf on the trees. For they might be parted for hundreds of years, she and Peter; she never wrote a letter and his were dry sticks; but suddenly it would come over her, If he were with me now what would he say? Edgar J.

Open Source Shakespeare: search Shakespeare's works, read the texts Scientific Speed Reading: How to Read 300% Faster in 20 Minutes (Photo: Dustin Diaz) How much more could you get done if you completed all of your required reading in 1/3 or 1/5 the time? Increasing reading speed is a process of controlling fine motor movement—period. This post is a condensed overview of principles I taught to undergraduates at Princeton University in 1998 at a seminar called the “PX Project”. The below was written several years ago, so it’s worded like Ivy-Leaguer pompous-ass prose, but the results are substantial. I have never seen the method fail. The PX Project The PX Project, a single 3-hour cognitive experiment, produced an average increase in reading speed of 386%. It was tested with speakers of five languages, and even dyslexics were conditioned to read technical material at more than 3,000 words-per-minute (wpm), or 10 pages per minute. If you understand several basic principles of the human visual system, you can eliminate inefficiencies and increase speed while improving retention. The Protocol First – Determining Baseline

Poem of the week: In the Trenches "Here's a little poem a bit commonplace I'm afraid," Isaac Rosenbergwrote to his friend, Sonia Rodker in the autumn of 1916. The poem, In the Trenches, was written by Rosenberg while serving with the British Expeditionary Force in France. A year and a half later, in April 1918, the poet was killed during a wiring patrol near Arras. In the Trenches turned out to be one of those poems a poet in a hurry considers finished, only later to discover, it was actually draft. It's still worth reading in its own right, and for the illumination it lends to the better-known and more achieved Break of Day in the Trenches. Born in Bristol in 1890, of Lithuanian-Jewish descent, Rosenberg had been raised in considerable poverty in London's East End. It's possible that In the Trenches was suggested by John McCrae's patriotic poem In Flanders Fields. Corn poppies grew abundantly in Flanders, and sprang up quickly from battle-devastated fields. Humanity and humour are snatched like rations. In the Trenches

Poem of the week: Returning, We Hear Larks by Isaac Rosenberg Nature returns... A poppy field. Photograph: Martin Argles for the Guardian This week's poem, Returning, We Hear Larks, is one of Isaac Rosenberg's most popular war poems, but I often wonder if he'd have made further revisions, given time. Rosenberg's life and work are a fusion of conflicting energies. Most critics have favoured those of his war poems that use a vernacular idiom and free-verse structure to expose the misery and grotesqueness of everyday soldiering. One revision we know about comes in the first line, which originally read, "Sombre the night hangs." From the next tercet we learn the men are returning to camp at dawn after a nocturnal sortie. Linguistic excess can pay off. Rosenberg's challenge in the poem is to lend combat-credibility to a subject bathed in Romantic luminescence. Shelley's To a Skylark is echoed in the metaphorical description of the birdsong as rain-showers: "Music showering our upturned list'ning faces." But hark!

Matthew Arnold: Poems Study Guide : Summary and Analysis of "The Scholar-Gipsy" (1853) Arnold opens "The Scholar-Gipsy" describing a beautiful rural setting in the pastures. Oxford is in the distance, and the speaker discusses the setting around him, painting an image of the shepherd and the reapers who work there. The speaker tells the shepherd he will be in the field until sundown, enjoying the scenery and looking at the towers of Oxford. All the while, his book will be beside him. His book tells the famous story by Joseph Glanvill, in which an impoverished Oxford student leaves his studies to join a band of gypsies. He became such a part of them that they began to tell him many secrets of their trade. The speaker continues the story, saying that every once in a while the scholar-gipsy is said to be spotted in the Berkshire moors. This poem serves as a commendation of what the scholar-gipsy has been able to do: escape from modern life and therefore evade the way it has been changing men.

Oliver Goldsmith The Deserted Village vs. George C "The Deserted Village" by Oliver Goldsmith is a nostalgic poem about the passing of a simpler, happier rural past. It tells the story of a village which had once been happy and flourishing, but which is now quite deserted and fallen to ruins. As for George Crabbe's "The Village", can be perceived as a response to "The Deserted Village", since, unlike Goldsmith, Crabbe conceived the idea of telling the truth about country folk just like he saw it, showing the rural poverty in a very bleak picture from which he himself came. In the first place, we have "The Deserted Village", starting in very subjective verses, with personal reminiscence: "sweet Auburn! Loveliest village of the plain", "seats of my youth, when every sport could please" (Ferguson and Salter and Stallworthy 627). The village appears entirely stable and serene: "how often have I paused on every charm" (Ferguson and Salter and Stallworthy 627).

Poem of the week: The Deserted Village by Oliver Goldsmith ''Twas certain he could write' ... Detail from Sir Joshua Reynolds' portrait of Oliver Goldsmith. Photograph: Public domain Oliver Goldsmith's The Deserted Village is both a marvellous descriptive poem and a powerful political essay. Polemic comes alive when it is grounded in detail, and Goldsmith conducts his argument using an expansive array of vivid supporting material – topographies, interiors, and sharp human portraits. Goldsmith's "Sweet Auburn! So, in the second line of the extract, we have the telling description of the furze blossom as "unprofitably gay". The next section introduces the village pub, and its details are recounted with much charm.