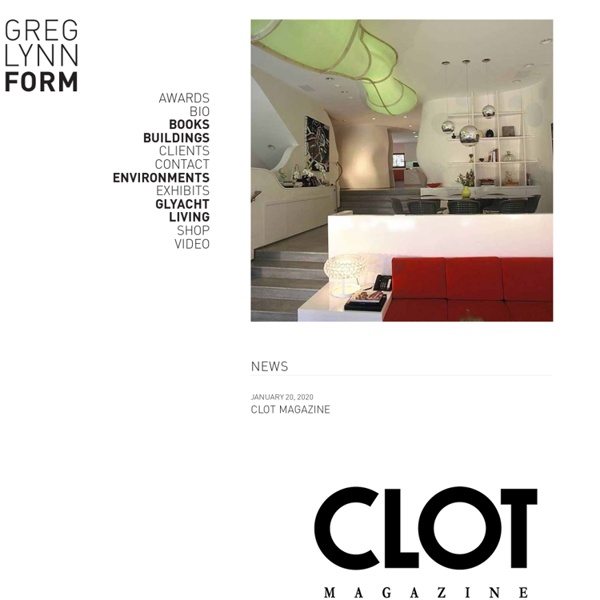 Louis Kahn From 1957 until his death, he was a professor of architecture at the School of Design at the University of Pennsylvania. Kahn created a style that was monumental and monolithic; his heavy buildings do not hide their weight, their materials, or the way they are assembled. Louis Kahn's works are considered as monumental beyond modernism. Famous for his meticulously built works, his provocative unbuilt proposals, and his teaching, Kahn was one of the most influential architects of the 20th century. He was awarded the AIA Gold Medal and the RIBA Gold Medal. At the time of this death he was considered by some as "America's foremost living architect

Blue Cube / Ahti Westphal Architect: Ahti Westphal Location: Grindstone Island, Rainy Lake, Minnesota, USA Client: Private Project year: 2005 Contractor: Burkham Built LLC Steel Fabrication: Rudy Imhoff Suppliers: Albany International, Paper Machine Clothing and Engineered Fabrics Area: 240 sqt Photograph: Courtesy of Ahti Westphal The Island The “Blue Cube” is located on Grindstone Island, one of many islands which dot the watery landscape of Rainy Lake in Northern Minnesota. The particular peninsula of the island that the building was imagined for is geologically composed of some of the oldest granite basement rock in the world averaging between one and three billion years old. With the US Canadian border immediately to the North and Voyageurs National Park immediately to the East of the buildings site, the area is a rare and special place for both locals and visitors alike who use the grand northern boreal forest for fishing, nature study, and forays into the wild.

Parametricism, architecture of hollow unreality? « Vews Zaha Hadid Architects and the Neoliberal Avant-Garde “….an architecture of spectacular, hollow unreality: based on unreal money, housing unreal programmes. This unreality has infused architectural production, often finding resolution in hysterical, liquid, fluid form at audacious scale – the kind of thing recently dubbed ‘Parametricism’ by Patrik Schumacher.’ The ideas of ‘differentiation’, the opposition to the ‘fixed’, has its own economic correspondent..” says Sam Jacob By Owen Hatherley

ELISA STROZYK "Wooden Textiles" convey a new tactile experience. We are used to experience wood as a hard material; we know the feeling of walking across wooden floors, to touch a wooden tabletop or to feel the bark of a tree. But we usually don't experience a wooden surface which can be manipulated by touch. "Wooden Textiles" is a material that is half wood-half textile, between hard and soft, challenging what can be expected from a material or category. It looks and smells familiar but feels strange, as it is able to move and form in unexpected ways.

Lake Austin Residence / Lake The Colorado River, which dissects the city of Austin, is a precious resource that this house very much embraces. Located on a long narrow river side lot, the house is conceived as a “floating fishing village” on the edge of a man made canal, where a collection of small gabled buildings and boardwalks mask the line between land and water. Architects: Lake|Flato Architects Location: Austin, Texas, USA Design Team: Ted Flato, FAIA, Bill Aylor, AIA Structural: Lundy & Associates MEP: Comfort Air Interior Design: Stonefox Contractor: Renaissance Builders, Inc.

Towards a Parametric Planning : danilnagy Towards a Parametric Planning Urban Magazine Fall, 2009 Architects have never made buildings. In the past, the products of architecture were mainly drawings, which were static representations of buildings in their final form. clubik This project presents results of my recent researches in domain of generative constructions, that are ‘bred’ with use of artificial intelligence. Structures shown here have been created by programs acting as ‘virtual playground’, in which all real world properties have been recreated (gravity and other external world circumstances influencing general shape of the construction). It mainly relates to ‘phototropic’ growth, which develops object in direction of light source and opposite to this of gravitational force. Additionally few other rules have been implemented, for example constructions automatically entwine already existing elements of virtual world (boxes), and constantly optimize themselves ; in cases where material and connections are placed disproportionally, nodes are moved to where more material is needed to transfer forces.

Synth-ethic: Art and Synthetic Biology Exhibition — Vienna, Austria Tuur van Balen Pigeon d’Or Pigeon d’Or proposes the use of pigeons as a platform and interface for synthetic biology in an urban environment. Tuur van Balen’s project attempts to make them defecate soap! By modifying the metabolism of bacteria naturally occurring in the gut of pigeons, synthetic biology allows to add new functionality to animals commonly seen as vermin and “flying rats,” turning them into tools for urban disinfection. In collaboration with James Chappell, the artist has designed a special bacteria that, when fed to pigeons, turns their faeces into a biological window soap.

International Retreat / Weiss/Manfredi For Weiss/Manfredi’s International Retreat – a conference center for international organizations to discuss issues and politics – the project exemplifies the firm’s emphasis of the integration of architecture and landscape. A series of existing early 20th-century buildings sit on the 400 acre site, and the project uses a network of gardens to create a framework for these renovated and programmatically transformed structures. More images and more about the project after the break. The landscape forms the organizing agent for the project as the new gallery wing for the informal gatherings sits at the center of these gardens. Running north-south across the site, the landscape is defined by a linear reflecting pool, trees, crushed stone, and flowering ground cover whereas toward the south, the design is more of a informal setting of water, trees, and outdoor seating which defines the garden.

furniture title I truly believe that people can be sincere to each other in spite of complexity of their nature. The objective of any designer, as well as of any other occupation related to the emotional enrichment of society is to help people to disclose their feelings hidden from the outside world and available only to close people. Creating objects and spaces, I want to inform people that the world may be aesthetically rich and beautiful and people can be a part of this world. I hope that sooner or later everyone will have goods created by designers or architects. Otherwise these occupations lose their meaning creating objects only for a few people. meboom.Стильный дизайн интерьера квартиры в Крыму от дизайнера Василия Бутенко.Украинские дизайнеры в очередной раз приятно порадовали своим чувством стиля и талантом.