The Planets Today : A live view of the solar system 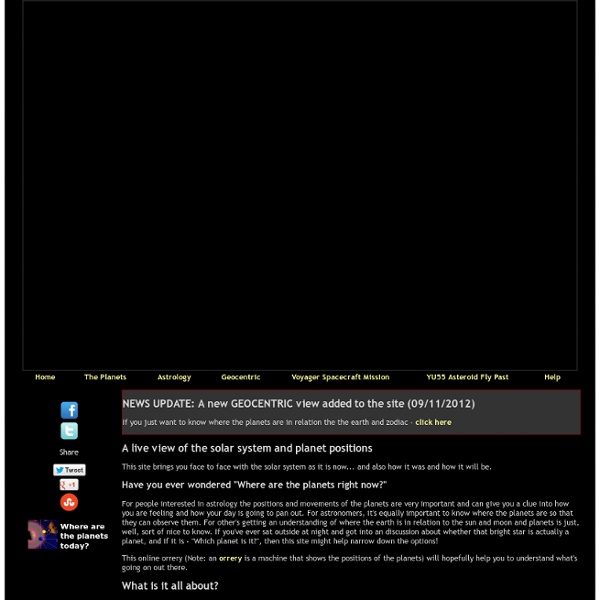 This site brings you face to face with the solar system as it is now... and also how it was and how it will be. Have you ever wondered "Where are the planets right now?" For people interested in astrology the positions and movements of the planets are very important and can give you a clue into how you are feeling and how your day is going to pan out. For astronomers, it's equally important to know where the planets are so that they can observe them. For other's getting an understanding of where the earth is in relation to the sun and moon and planets is just, well, sort of nice to know. If you've ever sat outside at night and got into an discussion about whether that bright star is actually a planet, and if it is - "Which planet is it?"

Day and Night World Map +1 this page: Follow us on Google+: Like/share this page: Magnifying the Universe Embed this infographic on your site! <iframe width="500" height="323" scrolling="no" src=" frameborder="0" allowfullscreen></iframe><br />Copyright 2012. <a href=" the Universe</a> by <a href=" Sleuth</a>. The above is an interactive infographic. We have also developed a complimentary poster that you can view here: Sizes of the Universe poster. If you're technically inclined, here's a look at the references we used to construct these infographics: Facts About The Universe.

If the Moon Were Only 1 Pixel - A tediously accurate map of the solar system Mercury Venus Earth You Are Here Your Age on Other Worlds Want to melt those years away? Travel to an outer planet! <div class="js-required"><hr> This Page requires a Javascript capable browser <hr></div> Fill in your birthdate below in the space indicated. (Note you must enter the year as a 4-digit number!)

Your Sky by John Walker Welcome to Your Sky, the interactive planetarium of the Web. You can produce maps in the forms described below for any time and date, viewpoint, and observing location. If you enter the orbital elements of an asteroid or comet, Your Sky will compute its current position and plot it on the map. Each map is accompanied by an ephemeris for the Sun, Moon, planets, and any tracked asteroid or comet. Across Our Blogs: Mars Curiosity Rover Moonrise, New Rover, Billion Pixel Marsscape Seems the Mars Curiosity Rover has been a busy little six-wheeled fellow these past few weeks. Here's a roundup of news related to the rover, from top Technorati listed science blogs... From ArsTechnica - Curiosity rover shoots video of Martian moonrise - NASA released a time-lapse video of the Martian moon Phobos, as it ascends into view. From GizMag - Curiosity begins long trek to uncover Red Planet's secrets - the rover has begun a multi-month journey to Mount Sharp, where it will dig in to find signs of past life. During its travel time, it will likely celebrate it's first year anniversary of being on the red planet's surface. From The Huffington Post - Mars Water?

A Guide to Different Kinds of Parallel Universes « NOVA's Physics Blog: The Nature of Reality These days it often seems that if a theory has loose ends, its dangling threads are surreptitiously tied together out of view within the hidden fabric of a parallel universe. While some researchers recoil from introducing unseen aspects to a theory, others find that the invisible knots create an irresistibly pretty package. Depending on one’s taste, there are so many types of parallel universes to choose from—alternative cosmos galore. If extra dimensions are not your thing, maybe bifurcating timelines would work. If an endless array of gigantic bubble universes seems intimidating, then perhaps a nursery of baby universes is more endearing. While there is not yet a GPS device or app to navigate through the cartography of scientifically sanctioned parallel possibilities, perhaps this guide to all things alternative will help.

collect space space history and space artifacts news Long before the first Instagram from space, the first check-in from orbit, or even the first astronaut's tweet, John Glenn sent an email to Bill Clinton. The reply it prompted was the very first email transmitted by a sitting U.S. president — it just happened to be to space. April 18, 2014SpaceX launches science-packed Dragon capsule on space station supply run A commercial cargo spacecraft loaded with more than two tons of scientific experiments and equipment lifted off for the International Space Station on April 18, after more than a month of delays.

Imagining the Tenth Dimension: September 2011 "Why isn't there nothingness? Nothingness would have been decidedly elegant. In the Ultimate Multiverse, a universe consisting of nothing does exist. As far as we can tell, nothingness is a perfectly logical possibility and so must be included in a multiverse that embraces all universes." At the end of the Introductory chapter of my book, I said this: "...the point of this exercise will be that by imagining all ten dimensions, we will have imagined a fabric that can account for all aspects of reality. Universe Today — Space and astronomy news The Falcon 9 and Dragon capsule stand ready for launch prior to the detection of a helium leak in one of the engines forcing a scrub of the launch attempt on April 14. 2014 – now reset to April 18, 2014. Credit: nasatech.net NASA and SpaceX are marching forward towards a Friday, April 18 liftoff attempt for the Falcon 9 rocket sending a commercial Dragon cargo craft on the company’s third resupply mission to the International Space Station following the scrubbed launch attempt on Monday, April 14 – forced by the discovery of a Helium gas leak inside the rocket during the latter stages of the countdown. An on time blastoff of the upgraded Falcon 9 sets the stage for an Easter Sunday rendezvous and berthing of the Dragon resupply spacecraft at the massive orbiting outpost packed with almost 5000 pounds of science experiments and supplies for the six person crew.

Beyond 2012: Why the World Didn't End Beyond 2012: Why the World Didn't End If you're reading this story, it means the world didn't end on Dec. 21, 2012. Despite reports of an ancient Maya prophecy, a mysterious planet on a collision course with Earth, or a reverse in Earth's rotation, we're still here. The Mayan connection "was a misconception from the very beginning," says Dr. John Carlson, director of the Center for Archaeoastronomy. The Kessler Syndrome Explained The Kessler Syndrome: 10 Interesting and Disturbing Facts Low Earth Orbit, an area of outer space around Earth that encloses all orbits below 2000 km, is the home of the International Space Station and of other thousands of satellites. It is also becoming a hazardous arena littered with mindless space junk and inoperable spacecraft orbiting at outrageous speeds. It’s a reality quite like Alfonso Cuarón’s film Gravity, and it’s called The Kessler Syndrome.