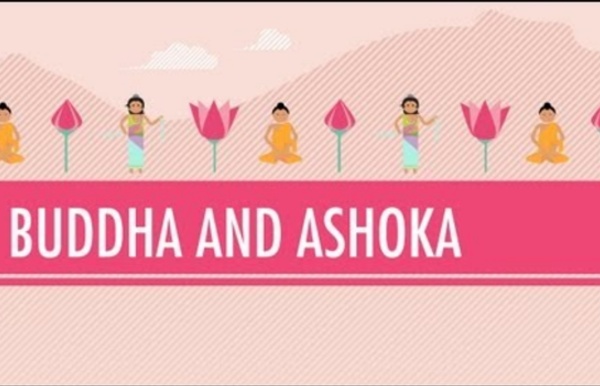 Buddhism - Historical development | Britannica Expansion of Buddhism The Buddha was a charismatic leader who founded a distinctive religious community based on his unique teachings. Some of the members of that community were, like the Buddha himself, wandering ascetics. Others were laypersons who venerated the Buddha, followed certain aspects of his teachings, and provided the wandering ascetics with the material support that they required. Read More on This Topic China: Buddhism The Buddhist age of China began in the 4th century. In the centuries following the Buddha’s death, the story of his life was remembered and embellished, his teachings were preserved and developed, and the community that he had established became a significant religious force. During its first century of existence, Buddhism spread from its place of origin in Magadha and Kosala throughout much of northern India, including the areas of Mathura and Ujjayani in the west. About the beginning of the Common Era, distinctively Mahayana tendencies began to take shape.

Misconceptions and Myths about Buddhism More than 400 million people worldwide practice Buddhism, representing about 7% of the world’s population. Despite the prevalence of Buddhism as a religion, however, many people still believe common misconceptions about it. If you are interested in Buddhism, you may be surprised to learn that some things you thought you knew about it are not true. Here’s a look at the top 10 myths about Buddhism to help clear up some misunderstandings. 1. Buddhism is Only Practiced in China People often associate Buddhism with China, partly due to the common sight of Buddhist statues in Chinese restaurants. In fact, historical accounts claim that origami, the Japanese art of paper folding, was first brought to Japan by Buddhists monks. 2. Since we mentioned Buddhist statues, we should clarify that most of these statues do not actually depict the original Buddha, Siddharta Gautama. 3. 4. 5. On the flip side, some folks who recognize that Buddhism is a religion believe Buddhists worship Buddha. 6. 7. 8. 9.

6 Absurd Movie Plots You Won't Believe Are Based on Reality We spend so much time here debunking silly things we see in fiction that it's easy to forget how truly ridiculous real life is in comparison. Even the silliest, most implausible characters or plots from action movies have come true. Not often, mind you, but they do happen. We're talking about things like ... #6. Badass Adventurer Scientists Indiana Jones movies, The Mummy movies, The Da Vinci Code movies, those Nicholas Cage movies that basically rip off The Da Vinci Code -- they all feature ridiculous but popular characters: university professors who throw away their mortarboards and "research" history by punching it right in the goddamn face. "Before you start killing everyone, would you mind fact-checking my thesis on Ancient Egyptian religion?" Nobody believes it's really like this, or at least we hope not. But It Has Happened ... Wikipedia"I try to carry at least one thing that could impale a Nazi at all times." thedispersalofdarwin"You're my next hat." #5. Daily MailPictured: Minions.

Ten misconceptions about Buddhism | UCLA Robert E. Buswell Jr. and Donald S. Lopez Jr. | November 19, 2013 Robert E. Buswell Jr. 1. Meditation is often identified as the central practice of Buddhism. 2. In fact, there are hundreds of forms of Buddhist meditation, some for developing deep states of concentration and mental bliss, some for analyzing the constituents of mind and body to find that there is no self, some for meeting the Buddha face to face. 3. Bhikṣu, the Sanskrit term translated as "monk," literally means "beggar." 4. It is often said that a war has never been fought in the name of Buddhism. 5. Buddhism has many philosophical schools, with a sophistication equal to that of any philosophical school that developed in Europe. 6. Buddhism has an elaborate pantheon of celestial beings (devas, etymologically related to the English word "divinity") and advanced spiritual beings (bodhisattvas and buddhas), who occupy various heavens and pure lands and who respond to the prayers of the devout. 7. 8. 9. 10.

Roy Chapman Andrews For the former professional American football coach see LeRoy Andrews Roy Chapman Andrews (January 26, 1884 – March 11, 1960) was an American explorer, adventurer and naturalist who became the director of the American Museum of Natural History.[1] He is primarily known for leading a series of expeditions through the politically disturbed China of the early 20th century into the Gobi Desert and Mongolia. The expeditions made important discoveries and brought the first-known fossil dinosaur eggs to the museum. His popular writings about his adventures made him famous. Biography[edit] Early life and education[edit] Andrews was born on January 26, 1884, in Beloit, Wisconsin. Career[edit] Roy Chapman Andrews, 1913 He married Yvette Borup in 1914. 1921 cover of "Across Mongolian Plains: A Naturalist's Account of China's Great Northwest" by Andrews In 1920, Andrews began planning for expeditions to Mongolia and drove a fleet of Dodge cars westward from Peking. Mrs. Bibliography[edit] Notes[edit]

Buddhism - Definition, Founder & Origins Buddhism is a faith that was founded by Siddhartha Gautama (“the Buddha”) more than 2,500 years ago in India. With about 470 million followers, scholars consider Buddhism one of the major world religions. Its practice has historically been most prominent in East and Southeast Asia, but its influence is growing in the West. Many Buddhist ideas and philosophies overlap with those of other faiths. Buddhism Beliefs Some key Buddhism beliefs include: Followers of Buddhism don’t acknowledge a supreme god or deity. Founder of Buddhism Siddhartha Gautama, the founder of Buddhism who later became known as “the Buddha,” lived during the 5th century B.C. Gautama was born into a wealthy family as a prince in present-day Nepal. He decided to give up his lavish lifestyle and endure poverty. After six years of searching, Buddhists believe Gautama found enlightenment while meditating under a Bodhi tree. Buddhism History Over the next few centuries, Buddhism began to spread beyond India. Types of Buddhism

The Game of Thrones in North Africa It feels strange visiting a country like Morocco and listening to people extol the virtues of a political system my country waged a revolution against. Morocco has a king, and he’s a real one too, not some kind of a figurehead. But I went there, I listened, and after almost ten years of visiting Middle Eastern countries wracked by tyranny, terrorism, botched revolutions, and wars, I was perhaps a bit more willing to hear what they had to say than I might have been a decade ago. A monarchy is a tough sell for Americans. The founders of our country fought against that system of government with force of arms. The very idea of a king is offensive to most of us on some level. Yet Morocco has been an American ally and friend since 1786. But what about politically? Monarchies are by definition not democratic. But now the “big men” in the “fake republics,” as Abrams described them, have almost all been overthrown while the monarchs remain. The lead years were rough. He smiled and laughed.