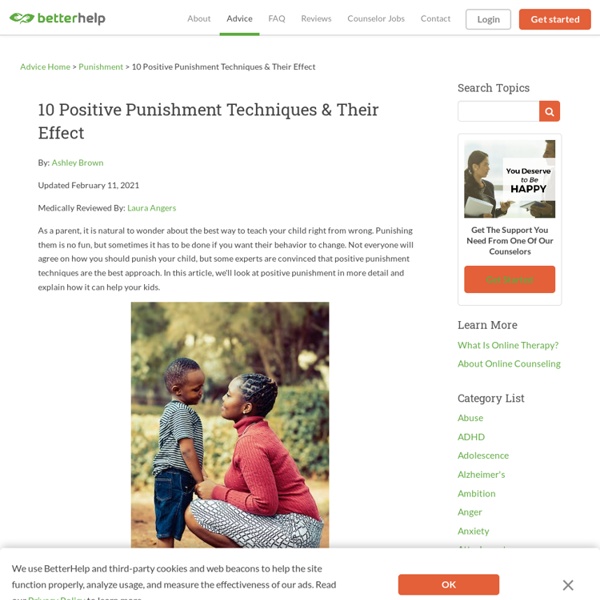 By: Ashley Brown Updated February 11, 2021 Medically Reviewed By: Laura Angers As a parent, it is natural to wonder about the best way to teach your child right from wrong. Punishing them is no fun, but sometimes it has to be done if you want their behavior to change. Not everyone will agree on how you should punish your child, but some experts are convinced that positive punishment techniques are the best approach. How Vital Is Positive Punishment? Get Started With A Licensed Counselor Today - Click Here This website is owned and operated by BetterHelp, who receives all fees associated with the platform. Source: pexels.com What Is Positive Punishment? When you have a particularly boisterous child, it can be tricky to determine the best way to discipline them. You may think that positive punishment means that it's always good, but this is not the case. Difference Between Positive And Negative Punishment There is a nuanced difference between positive and negative punishment. Counselor Reviews

How Negative Punishment Works Negative punishment is an important concept in B. F. Skinner's theory of operant conditioning. In behavioral psychology, the goal of punishment is to decrease unwanted behavior. In the case of negative punishment, it involves taking something good or desirable away to reduce the occurrence of a particular behavior. Rewarding behavior is key to parenting teens, study suggests Parenting is hard, and parenting teens brings about an entirely new set of challenges, from keeping their rooms clean to getting them home before curfew. But, a new study suggests parents who want their teenagers to keep their grades up could have better success if they focus more on rewarding good behavior and less on threatening to punish the bad. According to the report, published in PLOS Computational Biology, British researchers have found that adolescents focus well on positive incentives, but have difficulty staying motivated to avoid penalties. The study shows that teens and adults learn in different ways, according to the study’s lead author Stefano Palminteri, a researcher with the Institute of Cognitive Neuroscience at University College London. It suggests that “in some cases positive feedback may have more of an effect than negative feedback on learning” in adolescents.

Overjustification Effect and Motivation The overjustification effect is a phenomenon in which being rewarded for doing something actually diminishes intrinsic motivation to perform that action. Think about a few of the things that you love to do. Is there a sport such as volleyball or basketball that you love to play? Are you passionate about knitting, reading, or collecting movie memorabilia? Positive Reinforcement in Psychology (Definition + 5 Examples) If you read our earlier piece on positive punishment, you know that there are different methods of teaching and instilling good habits and behaviors. One of the most powerful and effective methods is one that you’re probably at least somewhat familiar with: positive reinforcement. Before you read on, we thought you might like to download our 3 Positive Psychology Exercises for free. These science-based exercises will explore fundamental aspects of positive psychology including strengths, values and self-compassion and will give you the tools to enhance the wellbeing of your clients, students or employees. You can download the free PDF here.

Which Is Better, Rewards or Punishments? Neither “I feel a sense of dread as bedtime rolls around. Here we go again.” A dad said this in our family therapy office one day, describing his son’s pre-bed antics. The child would go wild as bedtime approached, stubbornly ignoring his parents’ directions and melting down at the mention of pajamas. Positive Punishment: What It Is, Benefits, and Examples Positive punishment is a form of behavior modification. In this case, the word “positive” doesn’t refer to something pleasant. Positive punishment is adding something to the mix that will result in an unpleasant consequence. The goal is to decrease the likelihood that the unwanted behavior will happen again in the future. This approach may be effective in certain circumstance, but it’s only one part of the equation. Guiding your child toward alternative behaviors that are more appropriate to the situation are also needed.

Negative Reinforcement: What Is It and How Does It Work? What is negative reinforcement? Negative reinforcement is a method that can be used to help teach specific behaviors. With negative reinforcement, something uncomfortable or otherwise unpleasant is taken away in response to a stimulus. Over time, the target behavior should increase with the expectation that the unpleasant thing will be taken away. Read on to learn more about this type of learning. How to Reward Your Teen for Good Behavior Teenagers are young adults who are trying to learn the ways of the world. When they do something great at school or at home or simply make a healthy decision, parents can give them a reward. The reward does not have to be money, but it is a nice way to say "thank you" or "I'm proud of you." Teens need this positive reinforcement because it shows them that they are on the right track.1 It is also a good life lesson that you can pass on: good things happen to good people. When Do Teenagers Deserve a Reward?